The Evil Dead Remake: If You Want Blood, You’ve Got It 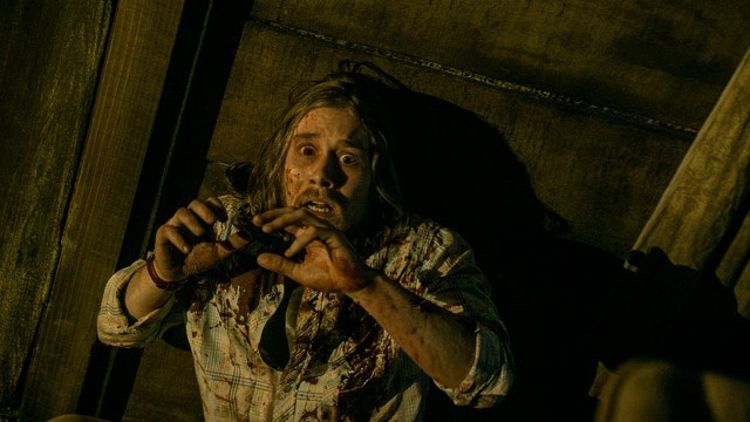 The blood gives what’s arguably the film’s most compelling and multidimensional performance. It spatters and gushes, spews geyserlike from actors’ mouths, runs thick as the wax on fancy whiskey and as gloppy as raspberry kombucha — and that’s leaving out the finale, which let’s just say owes a little to Singin’ in the Rain and a little to Slayer. The fact that Alvarez brought this hemophobe’s nightmare to the screen without computer assistance is, I guess, the slasher-flick equivalent of a band recording its album through tube amps straight to magnetic tape in a studio it built with reclaimed wood and its own hands, in that it will either tell you everything you need to know about this project or nothing, depending on what kind of person you are.

In Alvarez’s film, as in Raimi’s, a group of fairly attractive young people visiting a cabin in some undisclosed rustic location come across a creepy old Personskine notebook containing demon-summoning incantations in ancient Sumerian. In the new film, somebody’s taken a ball-point pen and scribbled emphatic English-language warnings — LEAVE THIS BOOK ALONE — all over the book’s pages, which still doesn’t stop nerdily goateed Eric (Thumbsucker’s Lou Taylor Pucci) from sounding out the supernatural phrase-that-pays and accidentally unleashing hell. (Insert meta-joke about the foolhardiness of messing with sacred texts here.) Something ancient and horrible zooms toward the cabin in an over-the-river-and-through-the-woods POV shot, and the evening begins to go very badly for everyone. In the Raimi version, these circumstances force the mild-mannered Ash to man up and dismember his demonically possessed friends before they can do the same to him; the role made Bruce Campbell into the quintessential B-movie actor of his generation.

Campbell returned as Ash in two more technically accomplished sequels, 1987’s Evil Dead II (unofficially the first Evil Dead remade as a comedy) and 1992’s medieval horror-fantasy Army of Darkness. By the third film, Raimi — a Three Stooges fan who’d gravitated to horror for his first film because horror movies usually recouped — was in the early stages of auditioning for a career outside the Fangoria box, and Campbell’s Ash had fully morphed into the kind of sarcastic tough-guy protagonist 12-year-old boys dream of growing up to be, a smooth ladies’ man and walking catchphrase soundboard who punctuated every other one-liner with a blast from his “boomstick.” This was the version of Ash that really entered the pop pantheon, via appearances in six video games — not counting the Duke Nukem franchise, whose protagonist got “Hail to the king, baby” straight from Army — and a string of increasingly nonsensical expanded-universe comic books in which he battled Freddy, Jason, Dracula, and the undead superheroes of the Marvel Zombies sub-universe. No word yet about whether the new Ash film that Raimi and his brother Ivan are reportedly working on will treat 2009’s four-issue miniseries Army of Darkness: Ash Saves Obama as canon.

Anyway: There’s no Ash and no obviously Ash-like hero in Alvarez’s Evil Dead, although we’re clearly meant to cheer when brooding David (Shiloh Fernandez, inducing nostalgia for the dynamism of Taylor Lautner) finally handles some business with the old boomstick. Like most reboots, this film strips away accumulated mythology and refocuses on the franchise’s core values — shock, claustrophobia, and creatively staged dismemberment. Also like most reboots, it expends an inordinate amount of energy fixing aspects of the original film that never seemed particularly broken. But if the fact that Ash & Co. choose to stay the night in the cabin instead of immediately hightailing it back to civilization once things start to get weird has always been a deal-breaker, you’ll be pleased to learn Alvarez and his co-screenwriter Rodo Sayagues have given their human-meatwads a plausible motivation for sticking around. David’s sister Mia (Jane Levy, from Suburgatory) is a heroin addict who’s decided to go cold turkey; David and his fiancée, Natalie (Elizabeth Blackmore), and their friends Eric (Pucci) and Olivia (Jessica Lucas) are at the cabin to watch over Mia while she tries to kick. When she begins showing signs of demonic possession, everyone assumes she’s just going through some really gnarly withdrawal pangs. So it’s a very realistic movie, right up until the trees come to life and people start turning into zombies.

Eric’s a teacher, and Olivia’s a registered nurse; every biographical detail the film gives us about these two characters appears in this sentence. David and Mia have a slightly richer backstory: David wasn’t there to support Mia as she tended to their dying mother, because he was too busy with his high-powered job as a garage mechanic. In a different movie, character development this profoundly half-assed wouldn’t be an issue — all we knew about the people in Raimi’s film was that they were Michigan State students, and I don’t recall ever wondering what their majors were — but Alvarez clearly intends for us to care about these people and invest emotionally in their survival. The actors do what they can to make that happen, particularly Pucci and Levy, but a better script might have helped; this one was supposedly polished by Diablo Cody, who appears to have added one sad little “Fuck, Marry, Kill” joke and then called it a day.

Before you post that comment: I’m aware all this stuff is beside the point, that this is an Evil Dead film and the splatter is what matters. So, fine: As a pure atrocity exhibition, Alvarez’s Evil Dead is stunning. It shows us nail guns and syringes and an electric meat-slicer during the (kinda draggy) first act, like Chekhovian guns, then follows through with glee on the promises those images imply. None of the mayhem feels particularly new, but there’s a sickening kineticism to the way it builds and builds. The fact that much of the mutilation this time around is self-inflicted by the possessed ups the creep factor even more, and those analog gore effects really are spectacular. Nothing pools quite like real fake blood, I guess. But I ask again: How realistic does a movie like this really need to be? And more to the point, how realistic can it get before the realism begins to detract from the slasher-movie fun? Raimi’s first Evil Dead was astoundingly gross for its time, but it was also shot for peanuts — it cost something like $350,000 to make, an amount that Roger Tapert, co-producer of the ’81 Dead as well as the 2013 version, has jokingly said wouldn’t have covered the first day of shooting on the reboot — and even at their most gruesome, the effects had a cheap-‘n’-cheerful quality that made it hard to take the whole enterprise seriously.

Over the top? Sure. Does it seem for one second like a real living thing — or even an un-living thing — is feeling actual pain here, even with all the shrieking? No way. You’re watching somebody hack up dummy limbs loaded with homemade stage-blood whose secret ingredient was apparently nondairy creamer, and you can giggle at the insanity of the moment without feeling like a ghoul. I have no problem with comically excessive movie violence, or with hyperrealistic serious-movie violence that looks like it really, really hurts, but in Alvarez’s Evil Dead those two lines cross in unsettling ways.

There’s a scene midway through the film — mild spoilers, although you’ll see it coming long before it happens — where a character gets bitten by one of the undead. The wound starts pumping black ichor almost immediately; when the rot begins to spread up her arm, she reaches for that meat-slicer and does what needs to be done. And we see it all. I’m still not sure how they pulled it off without maiming an innocent actress. If you’re a fan of the Campbell films, you’ll recognize this as an obvious homage to the astounding sequence in Evil Dead II when Ash’s hand becomes possessed and knocks him around the cabin before he chops it off with a chainsaw, yelling “WHO’S LAUGHING NOW?” as the blade chews through his flesh. But Evil Dead II is basically a live-action Daffy Duck cartoon with blood gags, and the hand-fight is a brilliantly staged physical-comedy bit. The amputation in Alvarez’s version isn’t supposed to be funny — very little in this movie is — but at the Hollywood preview screening I went to, the amputation still got laughs, once the fucking applause died down.

It’s a true holy-shit moment in the film, no question, and maybe I’m a bad horror fan for not finding it just delightful. But in this context, absent a sense of humor, realism looks an awful lot like sadism, and sadism tends to harsh my thrill-ride just a bit.

Does Kellan Lutz's Hercules Stand Any Chance Against the Rock's?