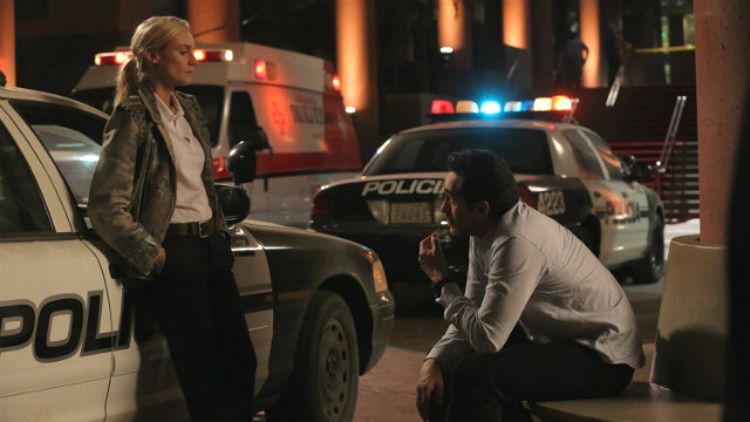 For eight weeks now I’ve approached The Bridge in the same way I would a delicious scone larded with raisins. I don’t really like raisins, but I love scones. So I’m more than happy to nibble around the distasteful bits. It takes a little more effort, but the results are worth it.

The serial-killer plot is raisins. And last night there was no avoiding it. Those desiccated grapes danced all over everything else like a Claymation commercial from the ’80s. Almost all of the concerns I expressed last week about the current state of murder investigations on TV were brought to the fore in “Vendetta”: the near impossibility of showrunners stashing a legitimate culprit in plain sight, the way the busy machinery necessary for tricking the audience (and the detectives) inevitably transitions from exciting to excessive. In one hour, The Bridge introduced a story line set six years in the past featuring a fascinating new character — the sniffling, preening Santi Jr. — and the spectre of a shadowy FBI agent who may or may not have faked his own death. Both plots were then rather clumsily splashed all over each other, like gulps of Tecate and tragos of tequila back in Daniel Frye’s partying days. David Tate, the shadowy FBI agent, is now “Kenneth Hastings,” Alma’s tender beardo, and, by slicing through Santi’s throat and then high-fiving the mirror with his stained and sticky palm, Tate/Hastings has both given up his anonymity and hit fast-forward on the story. It was brash, it was bloody, and, when considered a certain way, it might even qualify as ridiculous.

But I liked it.

Here’s the thing: Even during this, television’s new Silver Age of Slaughter, the motives of all these fictional killers are murky at best. On The Following, Joe kills because … of a writer who died in 1849? On Broadchurch … well, I won’t spoil it, but suffice it to say, I found the ending a lot more satisfying when I let my feelings do my thinking for me instead of my brain. When done right, murder seems to function on television more as a societal lasso, a storytelling stunt used to draw people together, to force them into uncomfortable positions and unnatural pairings until, rubbed together raw like rocks, some sparks ignite.

I had a feeling from the beginning that the theatrical, seemingly random deaths on The Bridge — half of an anti-immigration judge jammed against half of a Mexican prostitute, poisoned migrantes in the desert, a police shrink, his teenage daughter — weren’t really political except in the sense that all politics are personal. The revelation that all of this is an extravagant revenge plot enacted against one limping Juárez cop, a guy who is 100 percent incorruptible as long as his pants stay on, works for me for a few reasons. One, because it’s certainly no less implausible than a six-years-in-the-making tech-savvy campaign of immigration agitprop. And two, because I don’t think it’s ever a mistake for shows to make events character-driven rather than the other way around. We can argue for the next five weeks about whether Kenneth Hastings — played quite subtly and quite well, by the way, by Eric Lange, an actor you might remember more clearly if you picture him in a Dharma initiative jumpsuit — is capable of all these choreographed atrocities, or whether a con this long is the best way to get back at someone who cuckolded you, or whether the revelation happened too slowly or too abruptly or whether an academic could really afford all those iPhones on his modest salary. And I look forward to the arguments! But all I can tell you is that, in the moment, I experienced three distinct emotions:

1. Genuine surprise! It was obvious from Jump Street that Tate’s wife was going south of the border to be with Marco. But Hastings had been hiding in plain sight for so long, I never once considered him a problem.

2. Real terror! All the killings up to this point, with the possible exception of Gina and poor, exploded Manny Stokes, were more theoretical than affecting. Catalina Sandino Moreno is such a warm and insinuating presence and her character is so trusting that, for the first time, the stakes have been sharped enough to penetrate even my jaded, critical heart.

Let’s talk about no. 3 in a little more detail. Regardless of what you or I thought of it, whether it was mandated by the network, or just an incontrovertible aspect of the adaptation agreement with the plucky Danes responsible for Bron, the serial killer business had to be resolved. And going forward, I’m actually a lot more comfortable with a show that folds these wildly performative crimes into the tortured back stories of its protagonists than one that undermines its otherwise intelligent and nuanced sense of place with a heap of showy distraction. Here’s the thing: the U.S./Mexico border is fascinating and crazy enough. It doesn’t need the extra help. And so while The Bridge can devote its remaining A-story to Marco dealing with the sins of his past, my preferred series, The Weird Bridge, continues to unspool in the margins. It was there when Ray single-handedly dragged multiple boxes of guns to Mexico while ranting about “sucksauce,” when Graciela sealed a potentially ruinous business deal with a plate of freshly fried chicharrones, when Fausto Galvan’s demonic, laughing face interrupted Steven Linder’s milk-fed sex dreams. (Hey Steven! You might want to consider unbuttoning your shirt before taking a catnap in an un-air-conditioned apartment. Know what I mean, mi rey?)

The Weird Bridge isn’t even always weird — it’s also delicate and deep. It’s the sort of show that allows even the most marginal characters some moments of real dignity. Like Darcy, Steven’s harried boss. We may never see her again — we might not even care if we do — but with all the talk of her mother’s troubles it puts the specific “monkey” on Steven’s back in perspective. Or how about the show’s careful treatment of Gus Ruiz? Instead of the afterthought he’d be on most cop shows, here he’s both a fascinating mirror that reflects the ugly truth about Marco’s ego — the story about the red bike was heartbreaking, the attempted hug-into-handshake even more so — and an individual in his own right. The chocolates he sent Sonya were a mistake but not for us, since they led to what struck me as Diane Kruger’s finest moment as Sonya to date. “It’s hard for me,” she stammered. “I just don’t know what people want.” Most actors look forward to scenes like this because they can finally unleash the tsunami of emotion that’s been building for an entire season. But Sonya can only push out these little air bubbles of feeling, like one of those deep sea divers crammed in the deepest part of a fish tank. It’s a remarkable performance, especially now that the surge and swell of events are forcing Sonya’s buried inner life closer and closer to the surface.

Or how about the wonderful scene at Adriana’s house, when real, lived-in relationships between mother and daughters were sketched out in brief, artful strokes? My preferred version of The Bridge is the one in which Adriana, played with such toughness and insight by Emily Rios, eventually emerges as a co-lead. There’s a dearth of Latin faces in general on television, but Latinas are particularly poorly represented. And so I greatly enjoy the way Adriana reveals layers without ever taking off her carefully constructed armor. She’s softened to Frye, but he remains a “dick.” She’s flattered by Santi Jr.’s attention, but not nearly enough to do something stupid like leave the party with him. She’s a character who will make her presence felt in this dangerous, complicated world but she’ll do so on her own terms. (It’s worth noting — and celebrating — that “Vendetta” is the first screen credit for a young playwright named Fernanda Coppel who has said “My whole M.O. is to write more parts for Latina women.”)

In fact, with the revelation of the killer, the two shows, The Bridge and The Weird Bridge, now seem to be working in concert. It’s the way Frye’s past benders are directly connected to Alma’s predicament today, the way Marco’s personal indiscretions have led to a series of international incidents. (It’s particularly rich the way Marco takes such pride in his lack of involvement in the drug trade, yet his hands are now dirty just the same.)

Back and forth, back and forth across the border all these people and problems go, so much so that that all sense of guilt or responsibility has blurred. FX has yet to make an announcement on a second season for The Bridge but, now more than ever, I hope it gets one. The bones are so strong, its heart so very much in the right place that I think it can be forgiven if it occasionally, like poor Agent Gedman, loses its head. Last night, at episode’s end, both Kenneth Hastings and the series drove right through a yellow light. I’ve no interest in seeing either of them stop now.