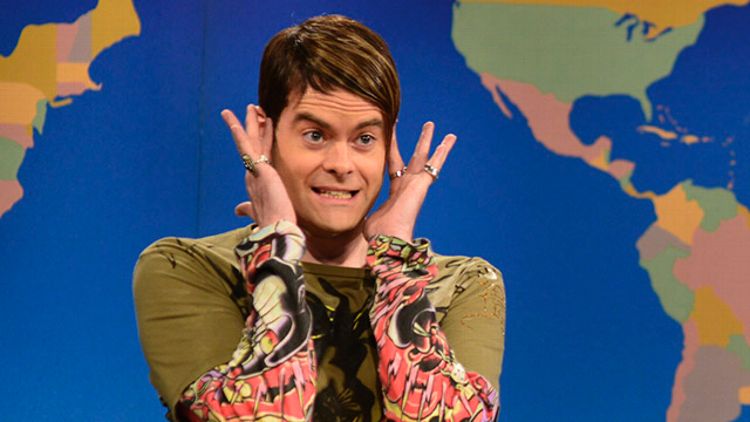 When Bill Hader left Saturday Night Live in May, he took Stefon — the much-beloved “city correspondent” and brainchild of Hader and former SNL writer John Mulaney (whose multi-camera comedy was passed on by NBC, but may still be floating around at Fox for a potential six-episode order) — with him. Stefon was given an emotional farewell during which Seth Meyers interrupted Stefon’s wedding to Anderson Cooper in a nod to The Graduate, rushing into a chapel filled with all of the mythological characters that populated Stefon’s night clubs: Alf in a trench coat (from “Slice,” a hot spot that also featured club promoter Gay Liotta), Furkels (Fat Urkels) Gizblo, the Gremlin on coke from “Booooooooof,” and little people in various costumes (dressed as fire hydrants, parking cones, and leprechauns infected with Hepatitis C).

Stefon is arguably the most likable character dreamed up by SNL in years, so it was inevitable that rumors of a full-length vehicle would be raised eventually. Despite the mixed reception to movies based on SNL characters, which range from the really good (oh, how I love Wayne’s World) to awfully bad (among them, the notorious It’s Pat), it’s easy to fall into the trust trap: During the course of four seasons, Stefon never let us down. Isn’t there some way to capture his essence, his Ed Hardy–clad joie de vivre, and build something respectable around him? Two years ago, Hader seemed open to the idea, telling Collider that nobody had asked him about a Stefon feature, almost like an invitation to do so; in May he seemed to have decided against it, telling GQ that Stefon lacked an “emotional through line. Sometimes people say to me ‘I want a Stefon movie’ and I’m like, you think you want a Stefon movie but then you’ll see the poster for it and think: ‘Wait, I don’t want this.'” In an interview this week, Larry King asked if Hader would consider a sitcom based around the whispery gadabout, which caught Hader off guard: “Sitcom? I hadn’t heard that one. People always talk about [a] movie … a Stefon sitcom would actually be pretty great.” He went on to say that “we’ve talked a little bit about an idea for a movie, and then we were like ‘I don’t think it’ll work.'” Hader and Mulaney had written a scene about Stefon coming out to his blue-collar parents, which I imagine would happen after he’d cruised over to the Bronx after a hungover mimosa brunch with Miley’s VMA entourage bears and Pierre, the Muslim Elvis impersonator. It sounds like it has the potential to be good. But wouldn’t it be a shame if it wasn’t?

Pierre and friends are, in fact, what’s daunting about the prospect of a Stefon movie. The visual parade of his cast of freaky night crawlers wasn’t anywhere near as funny as his descriptions of them from his desk chair at Weekend Update (nor were they really supposed to be — there was something solemn about our good-bye to Stefon), but you certainly wouldn’t be eager to see 90 minutes of him in an idling seat (65, tops). There would be no way to replicate the last minute cue-card swaps that kept Hader on the brink of a giggle fit whenever he was trying to explain the intricacies of DJ Baby Bok Choy and his ravioli hands. And even if he was treated tenderly, what if Stefon is the kind of person you only like on Saturday nights when you’re drunk? What if this movie did to Stefon what more than 80,000 petitioners fear Ben Affleck will do to Batman, or perhaps more aptly what Joey did to Joey Tribbiani (charm homicide)? At the same time, certain aspects of Stefon’s biography make him more easily adapted for film than most SNL characters: there’s his biological father, David Bowie, and the possibility it creates for a sick cameo; his humble abode, a trash can outside a RadioShack; his anxiety disorder; his party drug habit; and the imaginary EDM music I’d like to think throbs at ear-slicing volume through his bedazzled ear buds 24/7.

Hader’s exit from SNL was bittersweet. It was the right time for him to leave the party, before the lull had set in following a particularly hot streak, but it meant that we all flung our expectations on him as he headed through the door like thousands of heavy woolen peacoats. What we really want is sketches of Stefon, something that stays true to his world but takes plenty of liberties in deviating from its source material — maybe an adaptation like Office Space, which began as a series of animated shorts titled “Milton” and appeared on SNL before Mike Judge blew it up into an ensemble feature (and told our own Mr. Fierman about it in 1999). As powerful as Meyers’s and Stefon’s love proved to be, the real magic exists in the marriage between Mulaney’s and Hader’s brains, Stefon’s creators. We don’t want to yell “Stefon!” from the balcony and then sit awkwardly beside him on a bus ride to nowhere as he twiddles his veil and we both wish we were grinding in the back room of Your Mother and I Are Separating instead. Maybe we can hope to see an abstraction of Stefon, or his image smuggled into a brilliant ensemble alongside Drunk Uncle. Who knows? Only the human Magic 8 Ball who tells you to “ask again later.”