The Bridge Season 1, Episode 6 Recap: Throwing Money in the Fire in 'ID' 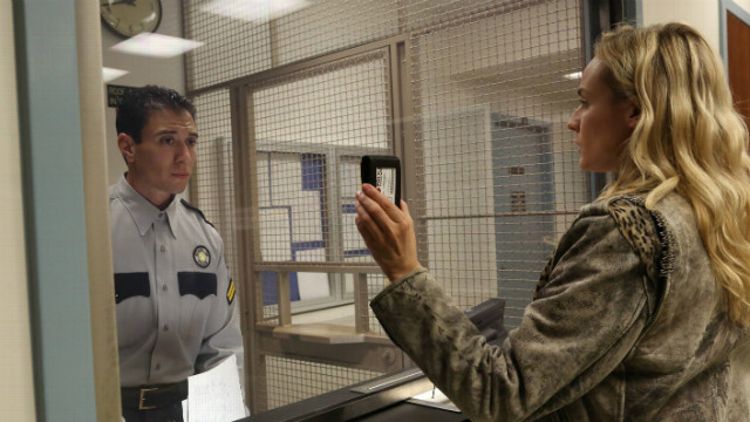 As we approach the halfway point of its debut season, The Bridge remains a very good show that tantalizingly flirts with greatness. “ID” excelled in all the ways previous episodes have: by crafting a dust-choked mood of dread and despair, by spending as much time scratching out the complicated pasts of the protagonists as it did suggesting their uncertain futures. But it also felt constrained by the same limitations. Every moment spent staring at the tackboard of murder victims under the fluorescent lighting of the El Paso PD was a moment spent away from the emotional tire fire of Sonya’s past or the locked-out exhaustion of Marco’s present. I fully understand — and even appreciate! — the idea of the serial killer as the lasso necessary to rope in all of these disparate, captivating worlds. And the idea of imbuing each death with a high level of specificity is interesting (the pill-dispensing shrink killed like a narco, the anti-immigration judge laid out on the border, etc.), but it also robs the perpetrator of that same specificity. The results of his crimes become far more interesting than his increasingly obscure intent. And this, in turn, puts the police in a passive, reactive role — at this point the reporters, Daniel and Adriana, are doing a better job of investigating the whos and whys of the bead-obsessed loco’s killing spree. Six weeks in, The Bridge remains fascinating for the way the show itself feels utterly bored with its central plotline. I honestly can’t remember seeing anything quite like it.

With the police work feeling like a chore, I suppose that’s why the hour focused so intently on making the professional feel personal. Marco, we discover, shares more with Fausto Galvan than a doctored death report. It was their fathers who built Fausto’s current criminal enterprise, an intriguing wrinkle that means every time Marco refuses a bribe he’s not only passing up a chance to buy new shoes for his kids, he’s tossing his inheritance into the fire. In the glow of the burning greenbacks, it was instantly possible to understand Marco’s roving eye, his loyalty to a personal code high and above any traditional bond like “marriage” or “Miranda rights.” Refusing to receive something doesn’t take away the slow pinch he feels of perpetually feeling owed something. Marco might not take the dirty money, but he gets his hands stained in plenty of other ways, because fathers and sons are often never more alike than when they’re in conflict. Backstory (and wheelie suitcase) unpacking moments like these are why you hire Demián Bichir. Only a skilled and subtle actor can connect unspoken character dots, make us understand everything without the benefit of explanation.

Diane Kruger had a more difficult and overt task this week: stay true to the medical reality of Sonya’s condition while also communicating to us that, on some level, her initial refusal to engage with the horror of Gina’s situation was a self-protecting choice. And I thought she did a fine job, particularly in the smaller moments, like Sonya’s relief at being able to fall back on law and protocol when the 15-year-old requested a smoke (“She trusts me: I’m a cop!”). And then, at the end, Sonya’s physical revulsion when her hands are unable to keep the blood inside of Gina’s dying body. (I also thought of Sonya’s words to Daniel Frye in the pilot, about how he’d feel “nothing” when the bomb went off. This wound was the opposite, a slow, fatal leak of which both Gina and Sonya felt every excruciating second.) I was truly shocked at the quick dispatch of a young character we’d only just met. And part of me wondered if The Bridge hadn’t overreacted here. Casting young people is always a crapshoot, but Cole Bernstein was excellent and haunted in a deceptively difficult role. Keeping her around might not have served the killer’s purpose, but it might have added some emotional grace notes to a show still very much in search of them.

But as sorry as I was to see Gina go, I think I can understand the rationale behind it. Beyond the visceral surprise and the subsequent dread at the realization that the killer is watching the police with the same focus that they once watched the desert death-cam, Gina’s murder hit at the tenderest spots of Sonya’s brittle exterior. She was unable to stop the killing of another young woman and, in the process, she once again suffered the demise of any hope of, as Hank put it, “getting answers.” It’s not that Sonya Cross is a stickler for rules because she cares so deeply about the law. It’s that without a sense of structure, of reasons, of permanence, her entire universe will collapse. What I’m learning to appreciate about Kruger’s performance is the way she plays every moment like a child lost in an aquarium, tapping at the glass of the shark tank to make sure it’ll hold. The episode’s silent final moments, in which Sonya stared beseechingly at the ruined husk of her sister’s killer (played by Brad William Henke, who had a cup of coffee on Lost in its final seasons), carried a concussive weight that much of the hour lacked. There is no resolution for the murder of Sonya’s sister, nor will there be, at least not until Sonya can stop staring at Jim Dobbs’s drawings in search of what they might contain and learn to accept them for what they are: nothing.

Alleviating all this darkness was the welcome return of Monty P. Flagman, attorney and casserole expert. I’m still unable to decide if Lyle Lovett’s arch remove is a dedicated character choice or evidence that he arrived on set too late for rehearsal. Either way, it’s fantastic. “I like women in all their forms,” he advised the group of strange bedfellows (literal and otherwise) assembled in his office. The collision of Tampa Ray, all venal appetite and sun-baked American ego, with the slithery Graciela, who operates with the same economy of movement as the rattler Steven Linder found in the middle of the highway a few weeks back, is promising and delicious. (I mean, this is a guy who has Don Swayze on speed dial!) And I love the way Charlotte is being presented in this negocio: She’s a potentially strong playmaker on her own, but she still feels more comfortable when she has a more traditional, which is to say “male,” quarterback out there to run her offense. Rebuffed by the steady Marco, she seems to have made the disastrous decision to draft Todd Marinovich to take his place. Still, the scene was all about our man Monty and the ease with which he smoothed over a potentially bumpy, felonious situation. In fact, he only seemed truly agitated by the loss of his pen. One has to imagine there are dozens more Montys out there in El Paso and Juárez, cooking beans and hoarding pens, all part of the rich vein of unpredictable and complicated weirdness running just below the surface of The Bridge. I’m no fan of gore, but that’s a vein I hope will be tapped more and more as the show continues to find its legs.

Living in uncertainty — I mean really putting down roots in swampy, shifting soil — is hard for anyone, whether you suffer from Asperger’s syndrome or not. It’s particularly hard for people who work in TV. I can’t imagine you’d find a network executive in 2013 who wouldn’t kowtow to the brilliance of The Wire, but you also couldn’t find one who’d green-light it. Making The Bridge a show about a crime carries with it something very attractive to those writing the checks: a promise of that crime being solved. But The Bridge chafes against that sort of tidy storytelling with every fiber of its being. Gina’s sudden death resonated far more strongly than that of her ostensibly more plot-connected father. The knives in Calaca’s body suggested a level of organized, accepted violence more terrible than nearly anything we’d ascribe to the phantom serial killer. And the revelation of Hank’s involvement in Sonya’s past — and let’s just take a moment here, mid-sentence, to tip our ten-gallon hats to Ted Levine; his craggy swagger provides necessary ballast for the show and a surprising level of soulfulness; I’d go out with him for burgers, chili, and heartburn anytime — tipped the cliché of the straight-shooting Texas lawman right over onto its side. I understand why The Bridge has to run the neat and orderly Lone Star up the pole every week. But more and more I’m wishing it would stretch out and let its freak flag fly.