The Bridge Season 1, Episode 4: ‘Maria of the Desert’ Shakes Things Up 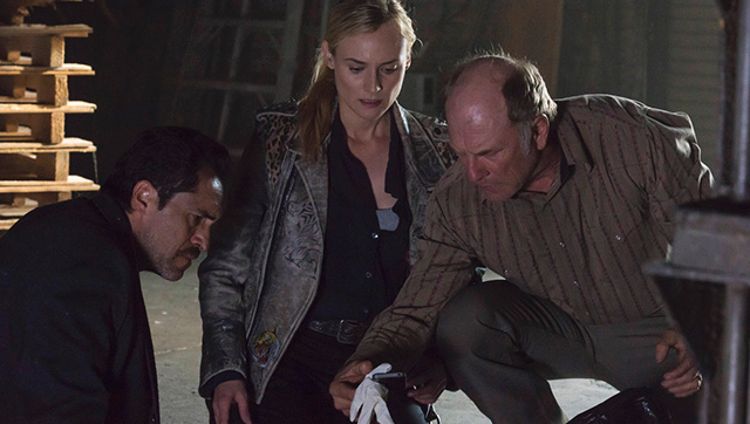 In the wake of TV’s boundary-pushing Golden Age, violent death has become an easy storytelling shorthand for showrunners, a tool not unlike a black border on Instagram: a dark and jarring juxtaposition that helps heighten and intensify otherwise uninteresting images. And, in fact, I’ve spent much of this week wrestling with the small screen’s out-of-control murder obsession and my growing exhaustion with it. So why do I find myself sinking deeper and deeper into a liking and admiration for The Bridge when its central conceit — a shadowy, tech-savvy serial killer with a bullying pulpit and no clear agenda — would seem to tick all of the aforementioned, aggravating boxes?

It’s something I’ve mentioned in previous recaps, but I think the very fine “Maria of the Desert” brought it home: The serial killer on The Bridge is intentionally an abstraction. This isn’t to diminish the horror of his actions; in fact, The Bridge has distinguished itself by finding space for the humanity of the victims, both the migrantes massacred in the desert and the husband of the bisected judge. (That scene from the pilot was important for the way it demonstrated Sonya’s complete lack of empathy. But watch it again and the slow-dawning reality on the new widower’s face is devastating.) But through four episodes, the role of the serial killer in the fictional reality of the show and in the storytelling is the same: to cause tumult and chaos and, above all else, to upset the precarious applecart of morality and legality that operates on and around the U.S./Mexico border. It doesn’t matter who he is; what matters is how people behave in his wake.

This takes what could normally be a staid and stratified situation and shakes it like a fine margarita. As long as the killer is out there, Sonya and Marco are forced to work together and the topsy-turvy nature of the entire region is suddenly revealed: Mexican cartel bosses are dragging wheelie suitcases full of money through illegal tunnels in order to help the cops, federal agents are doing their jobs in order to avoid personal embarrassment, and sniffly, twitchy journalists aren’t covering the news, they’re making it. Not to get too cute, but the serial killer is actually the bridge that has brought all of these characters onto the same side. And there they remain, eyeing each other warily and blinking in the hot desert sun.

I thought “Maria” was the strongest episode of The Bridge since the pilot, both for its intensity — a countdown clock in the shape of a dying woman will do that — and the way it just kept shaking that strong cocktail. In the midst of such an overheated hour, writer Chris Gerolmo found a surprising number of nooks and crannies into which exposition could be packed away. We learned, for example, that Sonya isn’t nearly as robotic as her primary behavior would have us believe; at least some of her laserlike focus is a coping mechanism, an icy suit of armor built to keep the emotional shrapnel of her sister’s death from penetrating her heart. (And I know we’re used to seeing Ted Levine in creeptastic roles, but how good has he been as Sonya’s boss and surrogate parent? It takes real ability and presence to play craggy and have it come across as kind.) When Hank tells Sonya there’s “nothing there” for her at what must have been her father’s house, it cast Diane Kruger’s committed and chilly performance in a slightly warmer light. The work, the single-mindedness, the treating of her sexual needs with all the romance of a muffler change: All of it is an attempt to fill that nothing with a steady stream of busy somethings. Sonya does little to endear herself to anyone, but it’s becoming clear that being left alone might be the worst possible place for her to be.

And Fausto Galvan continues to be a fascinating figure. He’s clearly a man of great power and influence and yet he dresses like he just stepped out to grab the paper. That’s a dangerous sign, of course. People who dress to terrify have something to prove. Galvan is a man who knows what he’s capable of and — this is key — knows that everyone around him knows it, too. (Reminds me of another confident monster who wasn’t afraid to treat every day like Casual Friday.) The scene at the nail salon in which he subtly but definitively runs Alma Martinez’s stoic padrina (that’s my name for her; IMDb says the character is called Graciela Rivera) through a wheat thresher was extremely illuminating and well-crafted, the word negocio hanging in the air like a curse. I love how we’re still meeting these people and already we understand their fraught, unbalanced history. Watching the slow reveal of the Juárez criminal hierarchy reminds me of that scene in The Hurt Locker in which Jeremy Renner thinks he’s tugging on one IED only to find himself trapped in the center of a fatal and terrifying circle.

As for the conclusion, well, the swaggering arrival of the FBI, the bungled drop, and the shock (not to mention unbelievably quick) beheading all hit entertaining if familiar beats. I understand why Marco and Sonya were marginalized here — the better to bind them together going forward — but it forced Demián Bichir into another week of sub-optimal business. The character of Marco Ruiz works best when he’s using his rumpled charm the way a matador uses his red cape: as a bright distraction from the sharpness lurking just behind. Seeing him so unambiguously keyed up was understandable — as he said, repeatedly, “I brought the money and the girl’s Mexican!” — but the choice didn’t play to his strengths or to Bichir’s. (I did appreciate the callback to Marco’s poor, busted huevos, though. Did the cowboy-booted killer really need to try so hard to crack them? And did that imply some sort of knowledge of Marco’s recent medical history?) All of this advanced the plot and muddied the waters in appropriate style, but the real takeaway should be plain: Never, ever walk into a Texas dive bar and order a Diet Coke with lime. At least not if you plan to walk back out in one piece.

Even as The Bridge drives the killer plot forward, I keep finding myself twisting my neck (sorry, Gedman) to take in more of the passing scenery. On any other show, the Charlotte Millwright story would be filler. Here, it still feels essential. I still love the wasteful, air-conditioned blast of that McRanch house and the catty sniping between Charlotte and her bitter, casually racist stepdaughter. (Though I did find it far-fetched that Marco wouldn’t notice his missing wallet. I know he regularly spends time in El Paso, but I would immediately freak out if I didn’t have my MetroCard on a trip to the other side of Prospect Park.) One of my favorite relationships in the show is the one between Charlotte and Cesar, the sad-faced servant who, more and more, seems like the one in charge. It’s far too easy to fall into behavior like Kate’s, dropping cigarette butts and assuming that those whose jobs involve answering to other people have no voice of their own, that an agreement to work somehow carries with it an agreement to obey. Cesar takes a paycheck to do what the Millwrights want, but that doesn’t mean he’s lost all agency. That’s rule no. 1 of a successful negocio.

And the biggest reveal of the hour wasn’t what was in the Dumpster or lurking in the reposado-soaked insides of Daniel Frye’s stomach. It was that Steven Linder may be a weirdo who fastens the top buttons of his rodeo shirts in 100-degree weather, but he’s neither a killer nor the killer. Instead, he seems to function as some sort of nihilistic coyote, ferrying women out of bad situations in Juárez into … well, I’m not sure what, exactly. An off-the-grid religious ranch that seems to marry the progressive politics of Big Love with the creature comforts of The Piano? “We’re alone in the world,” Steven mutters to the gun-toting Bob after delivering his latest charge. “I’ve seen the void.” Dark words, but his actions seem to belie them. If we’re all really flailing around, why does Steven work so hard, and at such personal risk to bring people together? And why would a chaste kiss really be enough to sustain him? There’s a slow-moving inevitability to the character and to this show that I’m really starting to appreciate. Despite the killer’s best (or worst) intentions, The Bridge isn’t about shoving Americans and Mexicans together into an awkward, barely functioning partnership. It’s about pointing out how we are already inextricably linked and have been for a long while. Sorry, Steven. We’re not alone, even though sometimes we may want to be. It’s the alternative that’s truly the void.