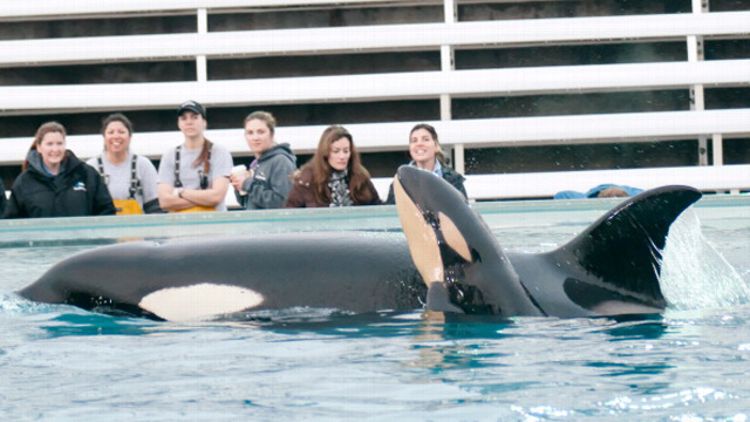 When you take your child to a zoo or a marine park, you have to engage in a sort of willful ignorance. The “sad kid at the zoo” photo that made the Reddit rounds a few months ago pictures a kid dressed as a monkey, clinging to the closed park’s gates. Most kids love the zoo, but many of their parents are ambivalent, staring at the bars inside the attraction with some measure of guilty gloom. There’s something to be said for the educational and scientific-research benefits of viewing animals up close, but the older you get, the more you focus on the disheartening details of an animal’s life in captivity. There was Augustus Bear (otherwise known as Gus), the polar bear at the Central Park Zoo who exhibited signs of depression before being euthanized because of an inoperable tumor last August, and Billy, an elephant at the L.A. Zoo, whose head-bobbing led to a lawsuit in 2012 between animal welfare activists (who argued that this behavior was a sign of sexual frustration and distress) and zoo officials (who countered that Billy and his fellow pachyderms were content). Despite the lengths that zoos go to in order to improve the quality of life for their captives — Gus was given a $25,000 treatment from an animal behaviorist — there are some things offered by life in the wild that can’t be replicated by a park. A cage is still a cage.

That’s why SeaWorld’s yearlong defense of its marine theme parks after the release of Blackfish, the Oscar-short-listed documentary that premiered at Sundance last January, hasn’t insulated it against protests from the public (even elementary school children) or musicians (including Willie Nelson, Heart, and the Barenaked Ladies) who canceled plans to perform at the park’s Bands, Brew & BBQ event in February.

The documentary focuses on the story of Tilikum, an orca who attacked and killed his trainer, Dawn Brancheau, in 2010. The whale was also responsible for two other deaths, and the documentary convincingly suggests that his aggression was a direct response to the circumstances of his confinement. (A side note: According to Tommy Lee, Tilikum also suffered some X-rated indignities.) Blackfish earned stellar ratings when it aired on CNN in October, and as the public outcry against SeaWorld grew louder, the park responded with an open letter refuting some of the film’s most damning claims and stating that “[our guests] leave with a greater appreciation for the importance of the sea, educated about the animals that live there and inspired to make a difference.” It’s hard to doubt that SeaWorld believes it’s doing the right thing, but it’s far more difficult to argue with the testimonials of the researchers and former trainers interviewed in the documentary. It’s an evenhanded movie, and it does not put you in the mood to “Rock the night away with Shamu®.” As National Geographic reported, “almost all students of orca believe that they are deranged by captivity, some more than others.”

The trouble facing SeaWorld is that the only solution to the Blackfish backlash is releasing their orcas back into the wild, essentially conceding the park’s passionately held mission statement. SeaWorld called the growing number of petitions on sites like Change.org “digital harassment,” and when the Orlando Business Journal posted a poll on December 31 asking if the documentary had deterred potential visitors from visiting SeaWorld, the SeaWorld Parks & Entertainment’s IP address accounted for more than half of the votes. The results of the poll originally indicated that 99 percent of respondents would still make a trip to the park, though as I type, the number has slid to 81 percent. A SeaWorld spokesperson responded: “If a poll goes up regarding SeaWorld, our team members have as much a right to vote as anyone else, and vote they did. We don’t have a ‘bot’ — each of those votes that came from SeaWorld were cast by a team member who is passionate about who we are and what we do.”

Blackfish is reminiscent of 2011’s Project Nim, which was also short-listed for an Oscar. The story of Nim Chimpsky — a chimpanzee who was the center of a psychology experiment in the ’70s that involved him being raised, briefly, as a human child to test his communication abilities — was heartbreaking, despite the fact that many of Nim’s caretakers had the best of intentions (they loved him, and gave him the marijuana he requested). What SeaWorld is fighting against in the court of public opinion is a truth we all feel when we see an intelligent animal in an enclosure: Something about the situation isn’t right, and no matter how hard we try to make sure the water is cold and filtered and the trainers remain dedicated, we’ve failed to act humanely — no matter how passionately we try.