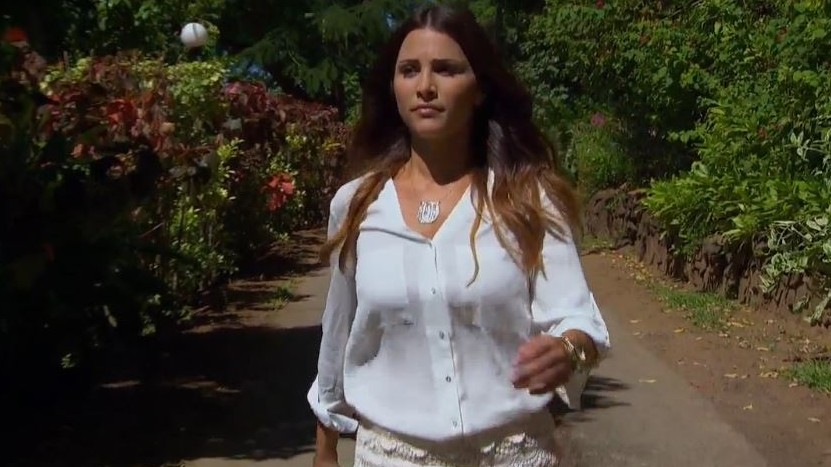 They call this Week 8. But that’s a dirty little lie told by The Bachelor’s producers to make us believe these carelessly thrown-together strangers have had two months to get to know each other, to incubate a deep affection as they crisscross the globe, to inch closer to the temporary bliss of ForeverLove.

But we at Bachelor School aren’t here to turn a blind eye to the show’s obvious, winking fictions. We’re not here to take a ride along in Chris Harrison’s pocket, subsisting on a diet of craft-service croutons and whispered assurances that everything is unfolding according to plan.

We’re here to spit out those stale croutons. To cup our hands over our ears and block out the deceptions. To wiggle out of his pocket and run free toward an end table piled high with freshly cut roses.

We’re here to tell the truth.

And the truth of Week 8 is that sometimes people who’ve known each other for a very short period — two, maybe three weeks in human time? — might not be right for each other. They might have nothing in common. They might not even know they have nothing in common, because they’ve been distracted by the whir of helicopter blades, the churning bazaars of faraway lands, the giddy splashing of some really hot ocean sex.

One may try to make that connection on a Hometown Visit, but family gets in the way. Taciturn dads withhold their approval. Quiet moms just want everybody to be happy. Overprotective siblings throw enough shade to spoil the harvest of your delicate love-grapes.

So you’re left with the Fantasy Suites, which then become the last, best chance to know each other, overnight crash courses in human connection.

But sometimes those Fantasy Suites become Nightmare Suites, and you know you just need to get the eff out of there. To win is to realize that you no longer want to play the game.

1. Open the Envelope, Open Your Heart

You may have your doubts about your long-term compatibility. (Short-term compatibility is never the problem, because if you’ve lasted until this advanced stage of the journey, you have managed to forge some kind of bond out of shared adventures and constant makeout sessions.) You may be withholding the obligatory expression of love — no three little words, no ring — because of a nagging sense you won’t mean it. But when your Bachelor hands you that envelope containing Chris Harrison’s invitation to spend a final, pre-decision night of passion alone with the man of your supposed dreams, you must accept. You must take the included key for the incredibly obvious symbol it is and unlock your heart, as well as any other parts of yourself you’ve been reluctant to share, ahem, nudge-nudge, montage of trains disappearing into tunnels.

To reject the invitation is to Priceline your own flight home. You’ve come too far not to see this thing through.

And to find out whether or not you and your Bachelor can actually stand one another.

There will be another picnic. There will be another stroll along a breathtaking beach, and some staged interactions with a variety of locals. There will be a mediocre, untouched meal placed on a coffee table in front of a couch overflowing with comfy pillows on a patio, because this is how all restaurants outside the United States are configured, apparently. You will chat through these activities, about your excitement for the future, or your anxiety about the possible end of your journey.

But you will not talk, not until the doors of the Fantasy Suite swing shut and the world is locked outside.

Finally, you are free of the camera’s unblinking eye. Of the unwavering gaze of America. Of the laughter of the producers in the control room, who are busy cutting together a clip package.

You can finally spend a night … talking. About your hopes and dreams. About things that are important to you. Politics. Religion. Family. An entire world of frank and probing conversation is suddenly opened up to you.

You may finally get to know each other.

You may finally find that love you’ve been seeking.

You may finally connect on that cerebral level that so frustrated others.

Oh. We meant to place this one before the talking. We apologize for the oversight. We were momentarily lost in that train montage. So may trains and so many tunnels, in and out, appearing and disappearing. Choo, choo!

OK: Put out, THEN talk. You wouldn’t want to ruin the putting-out part if the talking part doesn’t go well, so establish the physical connection before attempting the mental one. Pillow talk is still talk. (Or, if you prefer: draped-in-exhaustion-over-the-edge-of-a-Jacuzzi talk is still talk.) You’re still saying words. Well, he’s still saying words. You keep trying to say your words, and he interrupts to say more of his words, which, quite frankly, aren’t very interesting? Has he even been listening to you? And why does he keep bringing up the other girls and their Fantasy Suites? Does he not realize that’s disgusting, especially when he insists on acting out his favorite parts of those dates with the bananas in the complimentary fruit basket, even if he’s making funny slide-whistle noises while doing it?

This is why it’s important to put out first and at least (potentially) enjoy some of your long night together. See how wrong that went even when you did the steps in the correct order? Imagine a world where it was all terrible, unfulfilling conversation and no temporary surrender to your mutual, pent-up desires.

Your Bachelor, pleased about how well your date went, may spend some afterglow time splayed on a daybed, enjoying a majestic vista and snacking on one of those bananas he seems to enjoy so much.

You, however, may be paralyzed with regret, because that date did NOT go well. Did he actually think that went WELL? He may be even dumber and less perceptive than you feared.

Shake off the paralysis. Realize you eventually wake up from even the worst nightmares.

And slip out the door.

5. Return to Explain Your Decision in Person

But deep down, you know he deserves to hear the news face-to-face. And you deserve the opportunity to tell him.

He will never see you coming, even though you might have to slowly walk down the world’s longest road to reach him.

Sit him down on the nearest curb — there will be no comfort, no couches and pillows this time — and let him know all the ways he’s disappointed you. Let him know you do not love him, that you will never love him. Let him know that if he combines the letters “O” and “K” one more fucking time, you are going to stab out his beady eyes with a banana, making a slide-whistle noise while you do it.

Tell him good-bye. After all the talking, it’s the only thing left to say.

A final hug is optional.

As the Vanagon of Triumph carries you away from the smoldering Bachelor who still can’t figure out why you just lit him on fire, take a moment to savor your new freedom. You’ve dodged a bullet tipped with a princess-cut Neil Lane diamond. The girls you’re leaving behind were not so lucky. They’re still too busy smelling their roses to realize what’s happening.

They probably skipped lesson no. 2.

TV Land’s 'Kirstie': A Sitcom You Never Watched Made Up of Other Sitcoms You Did