TV Land’s ‘Kirstie’: A Sitcom You Never Watched Made Up of Other Sitcoms You Did 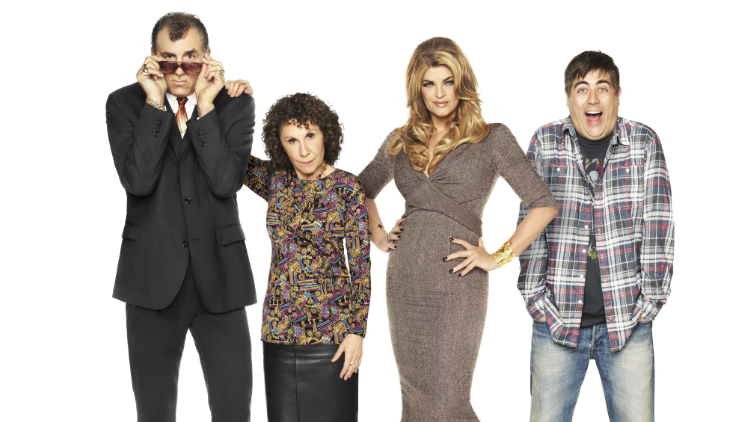 On TV Land, it’s NBC’s Hurricane Saturday every day. The actors’ characters may have different names, and the situations may have changed, but rest assured, almost all of the network’s shows are only slightly concealed fan fiction about what would happen if some of your favorites from other sitcoms got together and started hanging out. This has led to shows both innocuous — Hot in Cleveland — and noxious — Retired at 35. Yet the quality of the show doesn’t really matter, so long as it’s not actively bad enough to chase viewers away.

TV Land’s current prime-time slate is stuffed full of Everybody Loves Raymond reruns, and while that’s a much, much better show than any of the network’s original productions, the trick isn’t about making another Raymond. It’s about making another show that might have aired in the timeslot immediately following Raymond, the kinds of sitcoms that used to ride a cozy hammock between Friends and Seinfeld to a spot in the Nielsen top 10, despite no one growing attached to them on any level. And at that, TV Land excels. The network isn’t just about celebrating TV history, whatever that means. It’s about preserving an experience that’s gone away in an age of DVR and streaming options.

Perhaps no show on the network’s schedule better exemplifies this spirit than Kirstie, a Kirstie Alley vehicle so similar to those old post-hit burnoffs that it was actually created by Marco Pennette, one of the men responsible for the justifiably forgotten Caroline in the City. (The Lea Thompson vehicle was one of the few post-Seinfeld shows to actually make it to syndication, not that you’ll see it popping up in reruns anywhere now.) But where shows like Hot in Cleveland at least take stabs at giving their famous cast members new roles to play, Kirstie, which wraps up its first season on Wednesday night, is basically just asking what would happen if Rebecca Howe and Carla Tortelli from Cheers ended up working with Kramer from Seinfeld, and then all their famous friends dropped by, an episode at a time. This extends to the show’s publicity campaign: When I attended a press event for TV Land’s programming last month, the stars of Kirstie were more than happy to talk about their current show, but both they and the journalists assembled seemed just as happy (if not more so) when the conversation inevitably drifted toward roles of old.

There are attempts at differentiation between who these people once were and who they are now. Alley plays Madison Banks, a famous Broadway actress whose life is upset by the arrival of the son (the appealing Eric Petersen, the show’s one newcomer) she gave up for adoption. As her personal secretary, Thelma (Perlman) is trying the hardest to make her character different from the one who made her famous, even as the writers keep giving her material clearly meant to be delivered in surly Carla fashion. Madison also has a driver named Frank, played by Richards, who’s mostly around to be weird and perform the occasional pratfall. Richards isn’t quite as limber as he was in his Seinfeld days, but that he’s still possessed of such unexpected and graceful physicality means what laughs the program has usually derive from him.

Kirstie is, in the best Must See TV tradition, about a found family. Madison’s employees are the closest thing she has to friends and loved ones until her son comes back into her life (more about that in a moment), and though Thelma and Frank occasionally seem to hate their boss, they’re also genuinely concerned about her. There are many reasons for the decline of the multi-camera sitcom, ranging from acting styles to an overreliance on them in the late ’90s, but one of the least discussed is the way that in the wake of Seinfeld, too many shows tried to do their own take on the famous “no hugging, no learning” dictate and failed miserably at it. This tended to produce shows where it made absolutely no sense that the characters would continue to hang out with each other, so bitter were they about their situation and the world. The experience of watching one of these shows — particularly if you don’t find any of the characters even slightly relatable or any of the jokes even slightly funny — is somehow more maddening than watching a not-particularly funny episode of, say, All in the Family, where the jokes might age but the Bunkers’ fierce affection for each other hasn’t. These shows, instead, are a bunch of unnecessarily mean people sniping at each other while unseen laughers howl into the void. Can I possibly argue that saying Kirstie fits squarely into this tradition is meant as a compliment?

The fact of the matter is that the major broadcast networks, outside of CBS, have essentially forgotten how to do multi-camera sitcoms. Nobody’s ever going to argue that anything on TV Land or Nickelodeon or Disney even comes close to the finest examples of the form, but that they come close enough to the form’s C-plus examples is reason enough for a firm handshake and a participation trophy. To watch Kirstie is to see a network that has watched enough TV to know all the right moves — and just when it would be perfect to have the front door to Madison’s apartment open to reveal [hold for audience applause] Jason Alexander! Or John Travolta! Or George Wendt! Or Cloris Leachman! Or Kristin Chenoweth! (Whose success with milquetoast lines here, incidentally, suggests she missed her calling of being one of the great dames of ’70s sitcoms.)

These guest stars, by the way, are sort of a TV Land thing — Hot in Cleveland has them in droves, too—but Kirstie takes them to a weird, new art. Rather than using sizable guest parts to give new actors a break, it uses them to prop up the past, just like everything else on the show. In a different era, Thelma’s ex-husband would be played by some struggling character actor; in this one, you get Cheers’s own Wendt! Similarly, there’s no good reason to have Alexander as Madison’s agent, other than the fact that he was also on Seinfeld. That part could have easily been played by someone else. These parts are rarely cameos. They’re legitimate guest parts. But filling all of them with former TV stars — well, and Travolta, who’s better known for things other than Vinnie Barbarino at this point — only increases the program’s sense of grasping desperately for straws out of the fist of TV history.

Recycling its old stars aside, Kirstie hasn’t really learned anything of the classics’ soul. The actors are experienced enough to carry things on their shoulders. The writers know the setup/punch line format backward and forward. But there’s no reason to keep tuning in. The whole thing isn’t just meant to be comfort-food TV; it’s meant to be Twinkie TV. If you find one in a cupboard a few years from now and try it out, it’ll probably be much the same. If you never find it, your life won’t be changed an iota.

Put another way: One of the other shows Kirstie currently shares prime-time real estate with on TV Land is Gilligan’s Island. Kirstie is probably a “better” show than Gilligan’s Island, whatever that means, but Gilligan is far purer of spirit. It feels less like a cynical cash grab and/or an attempt to just keep working from a bunch of people invested in a medium TV keeps shunting to the sideline. Instead, it feels like some pure expression of the inner life of one Sherwood Schwartz. One of Kirstie’s go-to moves for laughs (when it isn’t having the characters endlessly and uncreatively insult each other) is to put all the characters in funny costumes. They dress up as rejects from the North Pole in the Christmas episode and as Civil War reenactors (complete with a big, bushy mustache for Perlman and a big, bushy beard for Alley) in another. The audience always roars in appreciation, but the actors never really do anything with their new personae. They’re just in a funny costume, because let’s get the laugh and move on, shall we? When the Gilligan gang dressed up, there was something giddy and weird and intoxicating about it, all at once, as if Schwartz’s fever dreams were reaching out through the screen to throttle you until you laughed. There’s no similar joy in Kirstie, just a sense of some dying form repeating things that once ensured its survival while shuffling toward extinction.

Todd VanDerWerff is the TV Editor of The A.V. Club. His writing also appears in the Los Angeles Times and Salon.