The ‘Bachelor in Paradise’ Finale: Love, Betrayal, Chastity Jeans, and Oh My God, So Much Effing Talking 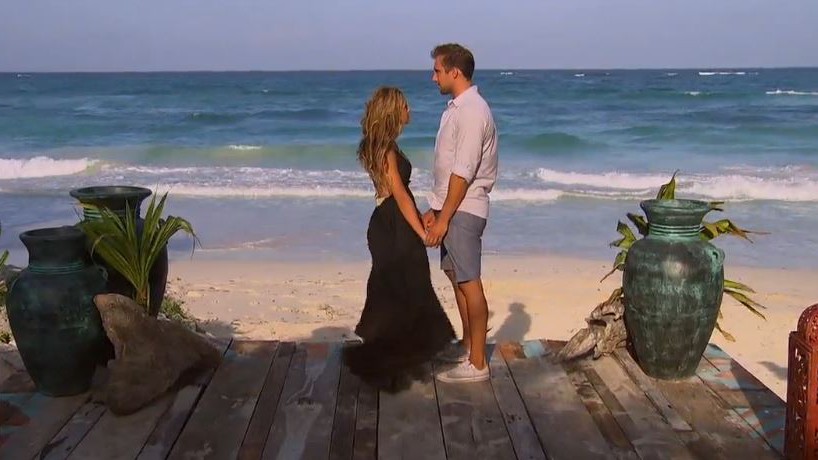 A little more than one week ago, as the final six Bachelor in Paradise couples stared uneasily at one another, simultaneously relieved that their ad hoc relationships had withstood the trials of yet another emotionally grueling rose ceremony and bone-rattlingly anxious about the total uncertainty of their immediate future in Beautiful and Relatively Cartel-Free Tulum, Mexico, Chris Harrison made an announcement. Hearts, swollen with the possibilities of what might await, leapt into throats, begging to be washed back down with fresh swigs of margarita slush. There would be no more roses this summer, he said. These were the favored seekers, chosen to continue their journeys in Paradise, which were coming to a rapid finish. Next week, it — whatever “it” is, because “it” had remained brutally vague — would all be over. Stuff was gonna go down. Lots of stuff. Stuff they couldn’t even imagine. Stuff beyond even the wildest dreams of the audience at home, who’d come to expect a pretty high stuff-level from the various incarnations of this franchise.

And then Harrison carefully doffed his alabaster Oxford shirt, crisp and beach-perfect as always, unfurled his enormous demon-wings, and quickly disappeared into the crystal sky, cackling with delight. He’s always been more of a dramatic entrance guy, so this new wrinkle in the repertoire was quite something to behold.

Last night, after a fevered week of anticipation of what the maddeningly undefined Paradise endgame might actually be — would they reinstate the Bachelor Pad Quarter-Million-Dollar Prisoner’s Dilemma Challenge (fist bump to Smiley Nick the Harmless Nonfactor) of two summers ago? OH MY GOD, would they up the prize money to a cool mil this time, if one partner demonstrated a willingness to cut out his or her heart and promise it to the other? — we finally got our answer about how this was all going to shake out.

Chris Harrison explained: There would be no prize money. No tribal councils forced to determine which of the surviving couples were most in temporary love. No surprise handover over the deed to their luxury Mexican hideaway so the “winners” could live out the rest of their days blissfully entangled in exotic sexual positions in the surf, interrupted only by the gentle whispers of cabana boys urging them to break the strenuous clinch of the Two-Backed Sea Turtle or the Fill Up My Greedy Pelican Pouch and eat a talapia taco to maintain their strength.

No, there would be none of that. And their final challenge was more terrible and cruel than even the worst torture our sun-baked, overheated imagination could have conjured:

Each couple would have to TALK TO EACH OTHER. Like, a lot. Like, with words being spoken by one person, entering the auditory canals of a nodding partner, and then responded to in a way that suggested those words were processed and understood. First, they would have to decide, THROUGH CONVERSATION, whether these relationships were worth pursuing outside of the Paradise cocoon, in a real world not explicitly designed to support their unions through unlimited alcohol intake and helpful producer interventions.

Then, and only then, would they be granted access to the fantasy suites, where they could fully test-drive their physical compatibility, in the established carnal tradition of their Bachelor forebears.

BUT THEN! They WOULD ALSO! Have to TALK AGAIN! ABOUT THEIR FEELINGS! And IF THEY STILL WANTED TO GIVE THEIR RELATIONSHIPS A WHIRL.

And the final prize?

An oversize check made out to Love.

Or what passes for it under these emotionally fraught circumstances; let’s not be crazy, these booze-blunted dopes have known each other for a hot, sweaty minute.

But wait, there’s more! Our lucky contestants would also receive free relationship advice from an all-star panel of Bachelor Success Stories composed of Sean and Catherine, Dez and Her Squeeze, and two other people we already don’t remember because we didn’t watch their season. One can’t place a value on the counsel of people whose joint off-show existences have somehow remained viable once Harrison’s gnawed them free of his nourishing placenta with his razor-sharp bat teeth. You don’t pick at their brains, you desperately feast upon them, and that’s got to be worth something.

Now that the challenges and the stakes have been established, let us review how our six surviving couples handled the unspeakable stress brought about by the Most Unbelievable Twist in Bachelor in Paradise History, Are You Fucking Kidding Us With This, Some A-Hole Won Two-Hundred-and-Fifty-Thousand American Dollars Last Time, Now He’s Got a Jacuzzi in the Shape of His Own Stupid Head in Every Room in the New Condo:

Everyone’s favorite high-end closet organizer, perhaps overestimating the strength of a foundation built on a jumbled pile of Twitter stars, Instagram hearts, and Tinder swipes, seemed utterly secure in the future of her relationship. What, AshLee worry? In front of 10 million people1 at home, ha-ha, did you get all of that on camera?

And then Michelle Money pulled aside her Best Friend in the Whole World Graham, told him to ditch the plastic nutcase, and that was that. Cut to: an uncomfortable conversation breaking the Paradise spell; the ghost of a weeping AshLee being SUV’d away from the crime scene where her love was murdered; a shrugging Graham gathering his things for an immediate return to his place on the line at the decency factory where he toils in the offseason.

“My name’s Zach and yours is Jackie.”

[Long pause as they both realize.]

“We never stood a chance.”

“I can’t believe we didn’t see it sooner.”

[A giant carnival-game claw descends from the sky, plucks them from their lounge chairs, and casts them into the ocean.]

On paper, it was the unlikeliest of Bachelor unions: a fiercely protective single mom who’s loath to hand over her heart again, and an unauthorized Hulk balloon from the Tulum Macy’s Thanksgiving Day Parade. Michelle Money was right to play it slow, to question the intense feelings constantly heaped upon her by the besotted giant who arrived on their beach ready to propose to Clare because he watched her bone Juan Pablo in the ocean and Hey, isn’t that an ocean right here next to me? I like oceans!

Torn between the very reasonable self-preservation instinct that warns any sane person to be wary of people who try to match china patterns to your singles-mixer nametag and the Magic of Paradise, Michelle Money phoned the preternaturally wise daughter she’d left at home with enough Lunchables to keep her alive through Mommy’s little trip.

The daughter’s counsel: Give it a shot. Be open to the magic.

And then, right on fairy-wand cue, something magical happened:

Cody and Michelle Money retired to the fantasy suite.

And emerged the next morning for couples’ brunch, genitals still smoldering from whatever sexual pyrotechnics they’d survived only with the assistance of a quick-thinking maid with a high-trigger gag reflex and ready access to a fire extinguisher and a welder’s mask.

Hulk smash. Money likey. Money very likey! Money totally comfortable with bragging to other couples about the things Cody did to her before the SWAT team arrived!

So, like, when you go to a fantasy suite, you’re usually supposed to sex? And, like, Robert, went to bed with his jeans on? And not in a situation where, like, he was going to ask Sarah to cut them off with some hedge shears as part of some gardening role-play? Like, he actually wanted to sleep? With jeans on? And no below-the-neck contact, because you save that for the second fantasy suite?

And that was maybe OK? At least until Michelle Money started demonstrating this thing they did last night, something involving a basket of plantains and a rental monkey? Which made Robert so uncomfortable he excused himself to put on a second pair of jeans over his regular jeans? Are chastity jeans a thing?

We’re starting to think this isn’t going to work out? Are we going home now?

Paradise’s Anointed Couple breezed through the conversation gantlet, sheltered by the strength of their undeniable feelings, and bolstered by Lacy’s inevitable release, to anticlimactic effect, of the three little words she had previously held so tight: [Gagging noise followed by the sound of a disgorged heart splashing into a toilet.]

And so the only drama remaining when Harrison beckoned them forth to take part in the bullshit kabuki of a final rose ceremony was whether or not Marcus’s shirt would disintegrate under the strain of his flopsweat before he could fish that Neil Lane Paid for This, Motherfuckers, Peep the Logo engagement-ring box out of his pocket. Improbably, the shirt stayed intact. He found the ring. Took a knee.

The ultimate prize of Paradise was, officially:

We will never forgive Chris Harrison for this betrayal.

And he’s never gonna hear the end of it next summer when we do it all again. We don’t care how amazing his demon-wings look silhouetted against the sun.