The Americans Season 1, Episode 6: ‘Trust Me’ 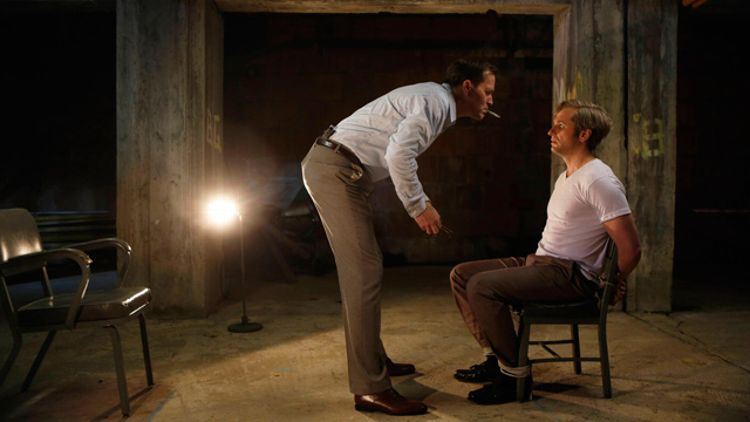 This isn’t the first and it certainly won’t be the last time I reference a lousy Sting song in these recaps, but after the knockout that was “Trust Me,” I feel I have to dream the Dream of the Blue Turtles once more. “I hope the Russians love their children, too,” sang Gordon Sumner, cloyingly, on the chorus of what remains the 636th-best-selling single of all time in France (thanks, Internet!). Last night, we got the strongest proof yet that the answer is an unequivocal “da.” Keri Russell’s Elizabeth prides herself on being a Winter Palace of repressed — she’d say “controlled” — emotions. But the sight of 100 purloined photos of Paige and Henry hit her a thousand times harder than the samovar she’d taken to the face just minutes before. It sounds so trite and, y’know, American to say it, but forget work/life balance: Last night’s vicious mole hunt was proof that people — sleeper agents and/or yuppies — aren’t lying when they say that family really is the most important thing. Last night we learned that, for Elizabeth Jennings, being a mother comes before Mother Russia.

“Trust Me” might have been the best episode of The Americans yet. It played with tension like Philip Jennings plays racquetball: aggressively, hitting us with it again and again, often when (and where) we least expected it. But what I love so much about the show is that it’s rarely the punch that leaves a mark. It’s the counterpunch. The surprise Sunday kidnappings of our protagonists made for thrilling viewing — and further proof that J.J. Abrams wasn’t just huffing hairspray when he claimed he dreamed up Alias by watching Felicity serve coffee to undergrads; she’s a brawler! — but, as usual, it was what came after that hit hardest. Once the torturer started in on names and dates, it was pretty clear that this was the KGB flushing their own nest. The Americans isn’t going to blow its main characters’ cover after only six episodes. (Although it’s kind of a credit to the show’s prickly unpredictability that I even considered it at all.) What wasn’t expected was how Elizabeth was the one unable to keep her cool. Instead of appreciating Claudia’s organizational purity, she lashes out, putting more than just her hands on her handler. First she almost drowns her, and then she almost beats her to death. “Your face is a present from me to them!” she yells. “Your face is a present!” It was visceral and it was vicious and it will leave a mark for both of them. Soviet agents aren’t supposed to fight back. They’re supposed to behave like Vasili: quietly get on the plane and die.

It seemed to me in that moment that Elizabeth surprised even herself with the depths of her rage and betrayal. It’s possible to trick yourself into mistaking suffering for sacrifice for a long time — even longer if under the influence of a persuasive ideology able to make you feel noble for being so stressed. But, as Doc Brown once said, “It’s your kids!” The more grown-up Paige and Henry become — and this week moved things forward perhaps a bit too quickly — the less they can be written off as cover or collateral. They’re very real and very precious and the thing I read into Elizabeth’s ferocious eyes was that they don’t deserve this. Until her outburst, she and Philip had done everything right. No one should threaten the lives of those who haven’t done anything wrong.

But here’s the thing: While it was genuinely uncomfortable to see the two youngest Jenningses in peril, Nick — the knife-carrying, duck-feeding, teen-ogling creeper whose booze-soaked commute I actually kind of envy — was only the end result of a worrisome pattern of extreme risk and even riskier neglect. Parent friends of mine have puzzled for weeks over the Jenningses’ childcare priorities: How much slipping out and/or choke-punching can one couple do without waking two non-narcoleptic humans? And in the end, it doesn’t matter which violent government happened to have snatched them; what matters is they abandoned two trusting kids at a shopping mall. (This might have been the only time when the lack of cell phones actually helped the Jenningses instead of merely provided more story flexibility for the writers. In a lot of ways, Paige would have been considerably more worried had both Philip’s and Elizabeth’s phones gone straight to voice mail.) Nick was a slightly predictable (some might argue cliched) potential predator, but my feeling is that the specifics didn’t much matter. Something like this was bound to happen eventually; it’s a miracle it hadn’t happened before. Nick was the tree that Philip and Elizabeth crashed their children into.

In an earlier episode, Elizabeth mused that Henry would be fine if his parents were arrested — or worse — but Paige is more sensitive. At first, the kids’ behavior last night seemed to directly contradict their mother’s assumptions: Paige was assertive; Henry was silent and scared. (Strong performances from Holly Taylor and Keidrich Sellati here. Glad to see we’re starting far ahead of Bobby Draper/Chris Brody territory.) But it was Henry who took the decisive action to get them out of a bad situation. I’m beginning to think Elizabeth is confident of Henry’s stability precisely because he’s not too cool, vain, or foolish to pretend he’s not afraid. Smashing a bottle into the head of a potentially psychotic bread-tosser seemed like inherited knowledge from his father — nature, not nurture — but at least he had the sense to wet his pants afterward. It was the only age-appropriate thing anybody did for the entire episode. At the end of the hour, the generation gap split the Jennings home like postwar Berlin: The Russian parents had a secret and now the American kids had one, too. When both sides have something to hide, it’s awfully easy to accept the others’ lies.

The thing is, despite Elizabeth’s primal yawp of protection, it’s hard to tell what lessons were learned here. Claudia’s mole hunt didn’t work out too well for her — or, it turned out later, for the rezident — but in a way it did exactly what it was meant to do: sow doubt and fear. In the last few weeks, Elizabeth and Philip seemed on the verge of forming an Eastern Bloc of their own, pledging loyalty only to the formerly fake family they’d created. But outside of the warehouse — there are as many warehouses in The Americans’ world as there are wigs in Philip’s vanity — everything collapses. Philip suspects Elizabeth must have broken at some point (why else would they leave her unharmed?), but the truth is older and almost worse. She admits that she had informed on him, telling Zhukov that her fauxsband “liked it here too much.” Matthew Rhys’s anger in this scene is almost as striking as Russell’s in the moment before. “I was supposed to be able to trust you, and I did,” he yells. “And I shouldn’t have!”

If Beeman’s manipulative tango with Nina has taught us anything, it’s never drink the dregs of a Russian spymaster’s teacup. But if it’s taught us a second thing, it’s that agents are at their most useful when they’re a little bit desperate and a lot bit alone. So the commute back to suburbia is all business for Philip and Elizabeth. Philip even carefully clicks his seat belt into place before wrapping the Oldsmobile around a tree. And, after putting the kids to bed, it seemed like all the newfound intimacy that marked the Jenningses’ bedroom these past few weeks came back to knock the wind out of Philip worse than a phone book ever could. He ran back out to Martha like a man desperate to hide from reality in work or in an affair — or, in this case, a work-sanctioned affair. It was particularly cruel to take something from Elizabeth’s nightstand as a gift — I thought it was an engagement ring; I was happy to see it was only a heart-shaped pendant — but then all jewelry on The Americans is show jewelry. (As Gaad points out, diamonds tend to lose their luster when you learn that mines aren’t the only dark place they’ve been pulled from.)

And is it jealousy, spite, or prudence that sends Elizabeth out herself to rendezvous with Gregory? She trades a few seconds of touching fingers for a comforting blanket of surveillance and security, but Gregory’s eyes suggest he’s once again keeping a silent tab of everything he feels she really owes him. Regardless, there’s one thing everyone can agree on: It’s total insanity that the Jenningses left their kids alone again, so soon after fearing they were about to abandon them forever. Have nanny-cams been invented yet?

If Elizabeth had her eyes painfully opened this week, Beeman seems to be slowly closing his. Or do you think he really believes the things he tells Nina about how she’ll be fine, how he’d “never” let anything happen to her? I love how the scenes between the two of them are getting more romantic by the episode — I know I’m not the only one who thought the diamonds were going to be a gift to keep her sweet, not shiny bait for a devious trap. (I also loved their clandestine meeting in front of the avant-garde video installation. It reminded me of the brainwashing videos seen on Lost and, you know, the actual Soviet Union.) It’s another nice mirror, the way Beeman is falling out of love with his all-American wife just as Philip is having his heart broken by his own. The Beeman bedtime scene was sweet, but it also felt painfully chaste; secrets, no matter if they’re of national security or of the heart, build walls that can’t easily be scaled.

The final scene was, like Elizabeth, a killer. She opens up about the pain of being deceived by her country and her cause: “I was attacked by the people I believed in. The people I trusted my whole life!” Philip shuts her back down with words fueled by a much deeper and more lasting betrayal, the one she had admitted to him earlier. “Yeah,” he snarled. “I think that says it all.” The deafening silence after he slammed the door said even more.

Is Howard Stern NBC's Choice to Replace a Moving-Up Fallon?