Is Howard Stern NBC’s Choice to Replace a Moving-Up Fallon? 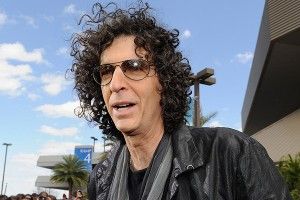 Earlier this week, word got out that NBC was preparing for a succession plan that would move Jay Leno out of The Tonight Show (uh, once again) and replace him with Jimmy Fallon. The question, then — well, one of the questions, once all the “Do we have the strength as a culture to go through another Late-Night War?” feelings were expressed — becomes who would replace Fallon on Late Night? Linda Stasi at the New York Post says NBC is thinking Howard Stern.

Stern stepped in as a judge on NBC’s America’s Got Talent last summer, to much fanfare, and according to the Post, it’s all part of a strategy to make Stern palatable to TV viewers, in preparation for a move to something like Late Night.

Howard has been trying to show TV suits for years that he’s the whole package — as opposed to the one he talks about on the radio. He’s shown — on “AGT,” one of the most popular family shows on TV — that he can act like a grown-up and play well with others, if the money is right.

And, according to a source who knows him well, the suits at NBC have gotten the message.

Of course, it’s not like Howard suddenly became Johnny Carson once he started judging preteen hula-hoopers on a variety show. Before this week, his biggest headlines were for fat-shaming Lena Dunham back in January. Back when the Conan-for-Leno swap was going bad, the only hint of a bright spot for NBC was the oasis of good times and positivity happening at Fallon. It’s hard to imagine they’d be able to breathe quite so easy with a Stern-led 12:35 show. Not to mention the fact that Late Night has always been a younger man’s game, grooming your Lettermans and Conans and Fallons for something bigger. With Stern at 12:35, NBC would be left with no one to ham-fistedly force Fallon out the door.

So stay tuned, I guess. NBC’s late-night situation remains, as always, a train wreck in progress.

The Americans Season 1, Episode 6: 'Trust Me'