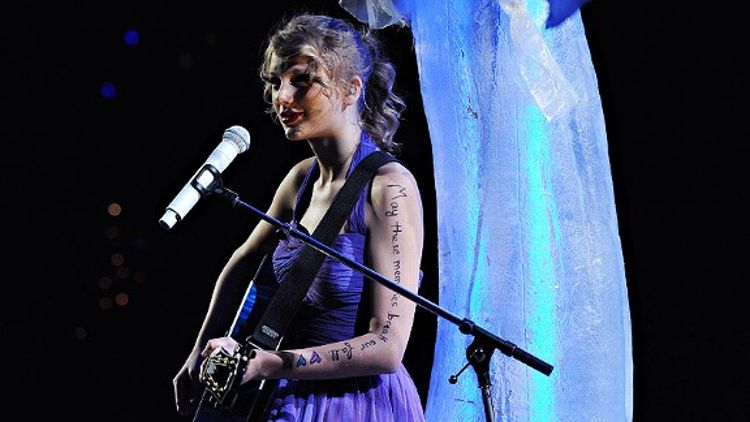 Confession: I did not get a complimentary press ticket to Taylor Swift’s show at Madison Square Garden last night. An hour before the show, with no word from the publicist, I arranged via Craiglist to meet a woman wearing a bright red Swift tour shirt outside the McDonalds at the nearby Long Island Rail Road concourse, and I gave her $60 for her ticket. It turned she had pulled a fast one — tricked by a Taylor Swift obsessive! — and sold me a pass to tonight’s show, which I’d have been out of town for. So I found a scalper, followed him out of the sight of the cops and around the corner, and haggled for a straight-up ticket swap (I was out of cash) while the two of us rode a crowded Penn Station down escalator. I’d never before had a problem with being 27-year-old male appreciator of Taylor Swift. But, honestly, as I was walking into MSG, the lengths to which I’d just gone freaked me out a bit.

And that was all before being confronted by Swift’s fans: shrieking, teary, tween and sub-tween girls, decked out in glow-in-the-dark bracelets and Native American feather headdresses, flapping around homemade signs (“SO FLY LIKE A SWIFT”?). It’s not that I expected anything different; it was just more overwhelming than I had anticipated. (For the record, there were some other adult humans there.) Swift’s banter was the exact kind of bullshit that makes millions hate her — “You guys are so pretty”; “You make me so happy”; “I bought this ukulele in Hawaii because it sounds so cheerful” — and its effectiveness inducing of shrieks was terrifying. At one point of the show, she took a lap around the floor-seating area, hugging everything in her path. Where we were seated, near the front row of the side seats, it was possible to lunge forward over the barrier and reach out to her. It felt like half the arena figured this out at once and, as Swift approached, so did a stampede of tiny feet and elbows. One aggressive tween shoved her little sister in front of us, instructing her to “Go in front of these people! Go! Go!” And, after Swift passed, more small people screeched: “We touched her! We touched her!”

My reaction to the keyed-up crowd (other than fear): “Is Taylor Swift spending more than she needs to entertain this crowd?” To her credit, this show was tricked out: she had a game backing band, costume-changing between country overalls to Metallica blacks; wholesome but acrobatic dancers, aggressively spinning in place like they were acting out an insane person’s idea of happiness; and giant stage pieces, like bridges and bells and white pianos, ascending and descending all over the place. Swift can go big, like when church pews were dragged out and the whole cast acted out the busted-wedding narrative of “Speak Now.” She can go small, like when she rocked “Fearless” by herself under a glowing tree. And she could also provide conversation fodder: for most of “Dear John,” we argued about the level of physical contact she probably had with John Mayer.

There were no pauses to catch a breath or fix a mic stand. Each transition was seamless, each moment exactingly scripted. It ran for over two hours, and it was one of the fastest two hours of live music I’ve ever seen. The setlist for this current tour has a dedicated spot for Swift to trot out a surprise guest, and our treat was the Goo Goo Doll’s Johnny Rzeznik. They did “Iris,” which Swift introduced as “one of the best songs ever written,” and even this calculated bit of spontaneity felt like it’d been run through a hundred times before.

By that point — between the tweens’ mania, Swift’s incessantly cheery on-stage persona, and the endless string of jams she was dropping — I’d long since given in to the spectacle. The show ended with “Love Story,” and Swift, in Juliet-dress, floated above and around the crowd with a flying balustrade, making meaningful eye contact with as many children as possible. Taylor Swift is a ruthless, fan-pleasing machine. And she is totally worth $60.