Tanlines’ Jesse Cohen on Mixed Emotions, Mystique, and Drafting Your Fantasy Team While Waiting in Line for Rick Ross 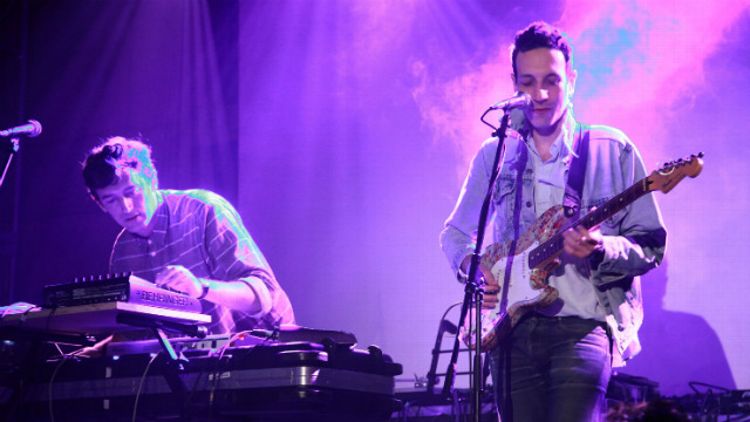 Tanlines — the Brooklyn indie-dance duo made up of multi-instrumentalist Jesse Cohen and guitarist/vocalist Eric Emm — released their debut album, Mixed Emotions, last week. It’s really, really good. Have you heard it yet? You haven’t? Here, go, check it out. It’ll only take you about 45 minutes. Grab a coffee, a comfortable chair, maybe a doughnut, let the soothing grooves, irrepressible hooks, and downcast vibes wash over you like a breeze, and then come back here and read our interview with Jesse. It’ll be waiting for you.

I understand you’re a Mets fan?

I am. Unfortunately. Which means I mostly pay attention to my fantasy baseball team. In the middle of SXSW I was trying to draft my team. It was bad timing, and it’s the first year I’m in my brother’s league so I was trying to impress everybody. I was just trying not to take four hours to make a pick. I was at SXSW walking around with my iPhone and every couple hours I’d get a text: ‘It’s your pick.’ I’d have to scramble, find a player, and I was trying to get into a Rick Ross show at the same time … I picked [Ryan] Braun [with my no. 1 pick]. I love him. I think he’s got a lot to prove this year.

Are you a Knicks fan also?

I decided I’m gonna be a Brooklyn Net fan. I didn’t grow up in the area, I moved here 10 years ago and I started following the Knicks, but I didn’t grow up a Knicks fan. And I figure if I’m not a Nets fan, who’s gonna be a Nets fan? I always appreciate the opportunity to get in on the ground level of anything. And I would love to have a Tanlines box. I think our album would have to do really well. But maybe I’ll try to convince Dean [Bein] from [our label] True Panther to get a box.

Your old band was called Professor Murder, which is a reference to a fake rapper from Mr. Show. Since you disbanded, a rapper with a similarly ridiculous name has popped up, Uncle Murda. Have you checked him out?

Nah, I haven’t really. I read some article comparing us, but I haven’t heard him. I don’t wanna say one way or another, but I think it’s cool.

You moved from Professor Murder, which was a full band, to a duo. Does it make it easier when there’s only two people?

I mean it’s certainly fewer e-mails. I have a hard time imagining being in a band with a lot of people, just ’cause of the logistics of it, but musical duos have their own set of issues too: There’s no middle child, no mediator. When we fight, it’s just the two of us.

How would you describe your dynamic? Does Eric not like to do interviews?

I do the tweeting, I do the stage banter, and he’s the one who sings all the songs and writes all the lyrics. He’s got a lot to say, and I’m still waiting for someone to do the consummate Eric Emm profile: He’s a really complicated, talented dude. And he’s got the mystique. It’s like a yin and yang: the dual front man responsibility.

Your stage banter is pretty excellent. Do you workshop it ahead of time?

Usually I’ll maybe think of one or two things before I get onstage, and the rest is freestyle. I remember when we did the East Coast tour, my joke was that I’d congratulate each city on having invented the Internet. In Boston it was at MIT, in D.C. it was wherever — it was a running theme. At SXSW I decided my theme was that music is not a competition. Just, like, a general reminder to people.

It’s kind of cool to just be cool and not say anything. And I guess we sacrifice that? But Eric gets that going. There’s this band, and I won’t say them by name, but I remember that we played with them two years ago in Brooklyn. And they said [from the stage], ”Yeah this place is full of fucking Brooklyn hipsters.” I thought that was very bad form; these people came to see you play. And I saw them again at SXSW and that was the only thing I remembered about them. I do think that banter, that kind of stuff, is pretty powerful. Your videos, your Twitter, your presence, that’s kind of how you fill in the blank about your personality. And honestly, I hope that it’s all goodwill toward us. But I can’t control that.

You’ve actually won an award for your Twitter (sample: “Sometimes I wish I cared about anything as passionately as Funkmaster Flex cares about cars”) from The Village Voice.

You know how it is, you’re talking to the Internet, and you put a lot of stuff out there, and you sort of wonder if people are listening. I don’t know, it’s a scary, powerful medium, and there’s not a lot of ways to be recognized for other than the follower count, I guess. It was nice to be recognized from an editorial perspective.

I just saw your tweet about The Streets album A Grand Don’t Come for Free, and how it makes no sense that he finds his missing money inside the TV. I love that album but I totally agree.

I think about The Streets a lot. I thought I was like the last Streets fan, but I put that out there, and a lot of people were like, “I think about that once a week.” I don’t know, I guess there’s like a whole generation of people taking about that still.

Have you noticed that people respond to your live show in different cities? Is there some city where they dance really weird?

I don’t think I can generalize. We’ve had really good shows in a lot of places. I don’t know if there’s a pattern. We’ve played shows in museums where people were dancing — literally, we played the Whitney, and it was a great crowd. And we played shows in clubs where no one was dancing. You know, we’ve never had a great show in Germany.

That’s funny. I hadn’t noticed. But my joke about it, about my own style and my skill set, is that my drumming style is a combination of Sheila E. and Meg White.

Will Modern Family's Cast Live Together During Contract Negotiations, Or Will They Die Alone?