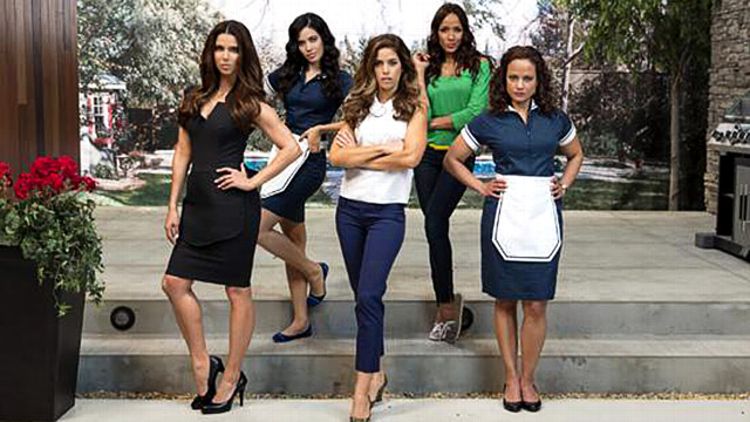 On Sunday, a fictional TV program called Devious Maids debuted. The show represents the first time in the history of American television that a show has featured an all-Latina leading cast. They’re all maids. THEY’RE ALL MAIDS. Awesome.

The show, which is based on the Mexican telenovela Ellas son la Alegria del Hogar, was created by Marc Cherry, a longtime Hollywood person most famous for holding Satan’s butt cheeks apart while Desperate Housewives fell out. Thus far, the face of the show has been Eva Longoria, one of its executive producers and a former Housewives star. Her stewardship of DM makes me feel the way rappers probably felt when Stacey Dash started tweeting about being pro–Mitt Romney.

Devious Maids was originally developed by ABC, but ABC passed on it because someone there is smart. It’s since been picked up by Lifetime. It is on Sunday nights. Don’t worry about setting your DVR, though, because every time it’s about to air a whole bunch of birds will fly straight into your living-room window at full speed and kill themselves.

Some notes from the show, along with some other important general information:

A Synopsis of the Series, as (Probably) Told by Show Creator Marc Cherry to the Show’s Producers

“Five Latinas who work as maids in Beverly Hills for rich white* people show off their fiery attitudes and cultural-liness, right? Pretty crazy, huh? Like, that’s winner on sass right there. But then, oh my God, here’s the twist: If you can even believe it, it turns out THE MAIDS are the normal ones and the rich people are rich, sure, but they’re crazy and they don’t understand what’s really important in life and these maids are so noble and mas fuerte and oh my god what a beautiful story to tell. Good stuff, huh? But, just to be clear, like, I want to make sure we’re all the way clear on this: They’re still maids. The Latinas HAVE to be maids. That’s it. Like, that’s THE ONLY way. Latinas. Maids. They HAVE to serve the white people. The white people are rich and the maids aren’t. We’re good on that, right? Like, white people: rich. Maids: clean shit up. Cool? Dope. Let’s shoot.”

(*One of the maids actually works for a famous Latino singer because, duh, that’s the only way a Latino is getting into Beverly Hills.)

Disobedient Cashiers: About a group of saucy Pakistani cashiers who, while embroiled in a thicket of wayward deceits and plot points, turn out to be regular humans with real emotions and everything. Who knew?

Discordant Breakdancers: About a group of saucy Puerto Rican breakdancers who, while embroiled in a thicket of wayward deceits and plot points, turn out to be regular humans with real emotions and everything. Who knew?

Disabled Engineers: About a group of saucy Asian engineers who, while embroiled in a thicket of wayward deceits and plot points, turn out to be regular humans with real emotions and everything. Who knew?

Disadvantaged Taxi Drivers: About a group of saucy Eritrean taxi drivers who, while embroiled in a thicket of wayward deceits and plot points, turn out to be regular humans with real emotions and everything. Who knew?

Disagreeable Garbage Men: About a group of saucy African American garbage men who, while embroiled in a thicket of wayward deceits and plot points, turn out to be regular humans with real emotions and everything. Who knew?

The Crucial Conflict of the First Episode of Devious Maids

The show opens at a party with a white woman talking to her maid, Flora, about how heroic she thinks she is because “you wash clothes you can’t afford, you polish silver you will never dine with …” and so on. This is little more than a lead-in to a threat about how if Flora doesn’t stop sleeping with her boss’s husband, she’ll have Flora deported (this is the kind of droll writing that drives the show — oh my word, listen to how these white people treat their maids, let’s all rally behind them, jajajaja). The husband and wife walk out. Flora starts writing a letter to an unnamed source, asserting that it wasn’t an affair, instead that she was raped by the husband.

Two minutes later, Flora is stabbed in the guts by a person in a hood. She walks outside and falls into the pool because, I mean, bro, if you get critically stabbed you don’t scream or ask for help or call 911, you just see yourself down the stairs, walk out into the backyard past all the people hanging out, wander over to the deep end of the pool, plop in, then take a few laps. Everyone knows the best thing for a stabbed stomach is the butterfly stroke. The show rolls forward from there.

Marisol Duarte: Played by Ana Ortiz (Ugly Betty). She’s mother to the boy accused of murdering the maid stabbed in the guts in the first few minutes, though nobody knows it yet. She spends the whole episode making sure that everyone who’s not rich and white knows she’s up to something. When she finds herself in the room where Flora was murdered (to clean it, of course), she does everything short of putting on a Sherlock Holmes hat and taking out a magnifying glass. The rapey husband walks in. He doesn’t suspect Marisol is there for anything other than to clean. White people are so dull and Latinas are so sharp.

Rosie Falta: Played by Dania Ramirez (Entourage). She works as a maid to save money to bring her son, whom she left in Mexico when his father died, to America. Sidebar: “Falta” basically translates to “missing” or “lacking,” which is an especially ham-fisted hat-tip from the show to itself.

Carmen Luna: Played by Roselyn Sánchez (lots of stuff). She is a musician. She works for the Latino singer. She spends the entire first episode trying to get him to hear her music. Eventually, this leads to a Russian (German?) amputee having to spend several nights in a hospital. For real.

Zoila Del Barrio: Played by Judy Reyes (Scrubs). She’s mother to Valentina, who also works as a maid because, I mean, legacy, yo. Sidebar: “Del Barrio” basically translates to “from the hood” or “from the ghetto.” I don’t have enough G’s, T’s, F’s, O’s, and H’s for all of the GTFOH’s that belong here.

Valentina Del Barrio: Played by Edy Ganem (never seen her before). She’s also from the auspicious Del Barrio tribe, daughter to Zoila. She spends the first episode trying to get her employer’s son to want to sleep with her. After Zoila notices what’s going on, she gives Valentina a cumbersome uniform to wear while working because “rich boys never fall in love with the help. Trust me on this [sad face sad face sad face].” Valentina outsmarts Zoila, though, cutting it up (I guess Zoila’d never seen a pair of scissors before, what with her being from the barrio and all) and sewing it into something provocative because she really wants that rich D, I guess.

After the woman Zoila works for mentions that her former boyfriend said she looked almost 40: “Well that’s not bad since you’re almost 60.”

After a coworker asks Carmen why the famous singer they both work for would want to be friends with her: “Have you SEEN me?”

After the woman Rosie works for irks Rosie during a TV interview, Rosie interrupts the interview and shouts that the woman’s baby has said his first words. The woman asks what he said, glancing back at the camera, which is still filming. Rosie: “He called me ‘mama’!”

They didn’t have a fat Mexican in a sombrero jump out from behind a curtain and shout “AYE-YI-YI!,” but they pretty much did.

What My Mom, Who, Best I Can Tell, Has Been a Latina Her Whole Life, Said When I Asked Her How She Felt About the First Episode

Her: There’s a show like that?
Me: Yes. It came on last night. It’s five Latinas.
Her: And they’re all maids?
Me: Affirmative.
Her: Why?
Me: I don’t know. Because I guess that’s what’s up.
Her: I’m not watching that.
Me: Why not? Are you offended by it? I was hoping you’d feel that way. Let’s talk about it.
Her: I don’t have cable.
Me: That’s right. Dang. But so you’d watch it if you did?
Her: Probably. If Sons of Anarchy isn’t on.
Me: … dude.

The Show in a GIF

Shea Serrano (@SheaSerrano) is a writer based in Houston. He’s written for MTV, XXL, Vice, Complex, Myspace, and other outlets. His first book, Bun B’s Rap Coloring and Activity Book, will be available this fall.