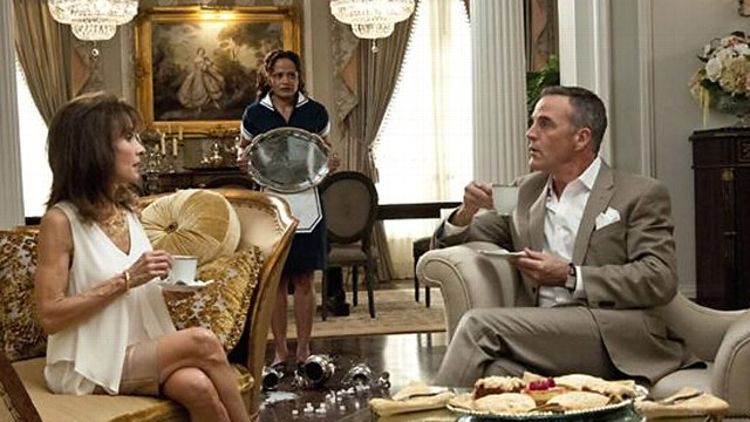 When I was 12, my family went out to a lake. My cousin (8), my sisters (8 and 10), and I were out on a paddleboat. We’d made our way about 200 to 300 yards offshore when I decided it’d be best if I just jumped off the boat and swam back. My cousin agreed (“Don’t be a pussy, yo,” being my irrefutable argument for his participation). After swimming, say, 100 to 150 yards, we realized we’d made a pretty bad mistake. We were too far from the boat to turn back and too far from the shore to keep going. Our arms felt like noodles and our feet felt like lead weights. We were going to die.* That was it. There was nothing else to it. So we both just started crying real bad and real loud.

That’s basically what this is beginning to feel like.

*We didn’t die. Turned out, the shore was still very far away but the water wasn’t all that deep. After 40 seconds of cry-swimming, we were able to touch the ground.

Marisol inched closer to finding out who murdered Flora. Rosie inched closer to backing her way into a love affair with the Rich White Guy she works for (which led to her making the episode’s first boner joke). Carmen slept with a music producer because that’s how the music business works. And Valentina pursued the Rich White D while Zoila kept trying to swat it away.

Distribution of Wealth and Status Among Races

Marisol: Marisol continues piecing together details about the prostitution ring that the Rich White Guy who murdered Flora is operating. Turns out — are you ready for this??? — FLORA WAS PREGNANT WHEN SHE WAS MURDERED.

Marisol figures this out by asking a high-powered friend to talk to the coroner. The coroner says she wasn’t pregnant — we later learn that he’s part of the prostitution ring — but Marisol is able to figure out that something is up because she notices some sort of indecipherable code at the top of the folder (Latinas are so astute). She looks at it, pulls her eyebrows toward each other, makes her best confused face, then asks her friend, “Wait, what does this mean?” They quick-shot on the folder to show “REVISED” stamped across the top in red ink. Then her friend processes the letters, synthesizes what they mean, looks at Marisol, and declares, “Hmm … this has been revised.”

MOTHERFUCKER I KNOW IT’S BEEN REVISED. THEY JUST SHOWED IT. I HAVE EYES. JESUS CHRIST. COME ON, GUYS.

Rosie: Rosie is still having a gloriously difficult time with her accent. At one point, it almost tapers into an Italian lilt, and she’s somehow developed a very prominent situational lisp as well. (Her, every time she talks to Mr. Spence, the Rich White Guy she works for: “Meee-thur Thhh-penthhh …” Poor thing.) No update on her son (still stuck in Mexico or a Dumpster behind a KFC, I don’t know — it’s getting hard to keep up), but she has officially reeled Meee-thur Thhh-penthhh into admitting his feelings for her. At the end of the episode he kisses her in the laundry room.

Because she’s a maid.

Carmen: Carmen, now managed by a powerful music person in L.A. because she gave him the good-good, continues slowly walking down her dream of becoming a music star. This is leading to a true-blue rivalry between her and the one-legged Russian house manager (FOR REAL). The one-legged Russian house manager (OLRHM) sabotages Carmen’s relationship with the manager by revealing that Carmen is 37 years old!

Carmen retaliates by taking OLRHM’s prosthetic leg while she sleeps and gluing a bunch of bells to it so she can’t sneak up on anyone anymore (not for real).

Zoila: Last episode, it was revealed that Zoila, much like she’s tried to stop her daughter from doing since the beginning of the show, once herself pursued the Rich White D with great vigor and fortitude (that’s this family’s legacy, it would appear: running and grabbing at Rich White D like a dog at a car bumper). This episode, we get to meet the guy. He takes her to lunch, apologizes for ditching her for a Rich White Woman, then immediately follows that by asking her to go upstairs. Zoila, flabbergasted, turns away the Rich White D, then proclaims that after 20 years of thinking that she wasn’t good enough for him, it was he, in fact, who wasn’t good enough for her!

Valentina: Valentina is basically invisible this episode (the Rich White D she was so desperately chasing in all of the other episodes has vamoosed, so she’s become useless to the plot), save for her cornering her mother and telling her that she should be free to chase the Rich White D the same as Zoila did.

Marisol finds herself in a room with the aforementioned coroner at a house party. He’s wearing a robe because she spilled a drink on his pants so he’d take them off and give them to her so she could rummage through his wallet just like a real police detective. When she hands his pants back to him, he tosses them aside, saying it’s a little hot in the room. She tells him she’s not interested in his Rich White D. He persists. She tells him again. They have a standoff. She counts down from 10 (he finishes it for her, of course). She sets a curtain on fire and begins to walk out. She stops at the door, turns around, and with the sass of infinity sass monsters, notes, “You know what? It IS a little hot in here.”

Me: Wussuppers, mama?
Mom: Hey, kid.
Me: So I know you’re busy. Let me tell you what happened on Devious Maids last night real quick.
Mom: OK.
Me: OK, so you have the five maids, right. The fir—
Mom: How’s the baby doing?
Me: Huh? Oh, um, he’s good. He’s fat. He’s still not crawling. Last night, [Wife] put him in the bed with me when she went downstairs and so when I woke up he was clawing at my nipple.
Mom: That’s cute. Give him a kiss for me. Send me some pictures.
Me: OK, I will. But so with Dev—
Mom: I have to get back to work. Call me. Bye.