The first trailer for Star Wars: The Force Awakens dropped on a largely unsuspecting populace in late November, reviving in us a long-dormant hope. Its bobbleheaded soccer-droids and Millennium Falcon S-turns and soul-stirring orchestral fanfares aroused feelings inside of us that served as a reminder that our childhoods were not, in fact, irretrievably broken by an obsessively tinkering, self-sabotaging creator who couldn’t leave things well enough alone, by a floppy-eared CGI abomination designed with the Toys R Us shelf in mind, by a treacherous bounty hunter shooting first.1 If it didn’t totally erase the memories of Hayden Christensen’s stilted, cry-faced pre-Vadering or Natalie Portman’s star-geisha wardrobe, it at least distracted us from them with a minute and 39 seconds of hints that George Lucas may have tossed the keys to the X-wing to people who might have some understanding of what we loved about the original trilogy. Maybe it took $4 billion of convincing,2 but whatever, the important thing is that the new people burned his six-film treatment for The Jar Jar Chronicles the moment the signature was on the contract.

Five long months later, a second trailer has finally arrived, debuting at today’s Celebration, a convocation of the Jedi-robed faithful, who were rewarded with the new footage we’ve all been craving since that fresh Bantha meat got tossed down the Rancor pit at the end of last year. Does the new footage deliver? Open a window wherever you are. That deafening moan you hear is a millions-strong fangasm originating from the greater Anaheim area and quickly washing over the entire Star Wars–loving universe, initiated by the Lucasfilm title card and subsiding two minutes later with the aged Han Solo’s postcoital exhalation of “Chewie, we’re home.”

But in the middle there’s a speeder racing across familiar desert terrain, in front of the ghostly husk of a felled Imperial Destroyer. There’s the unmistakable voice of Luke Skywalker explaining to an unseen listener, “The Force is strong in my family. My father has it. I have it. My sister has it. You have that power, too.” There’s the ruined mask of Darth Vader, a familiar bionic hand reaching out to pet a droid, and a lightsaber handoff that seems like it might be meaningful. Then there are the swarm of X-wings, hotshot pilot Poe Dameron3 screaming with glee, and the obligatory shot of the new Sith-y bad guy with the next-gen weapon every child in America will be swinging dangerously in the playgrounds next year. There’s the Falcon maneuvering in a tight space, because that reminds us of the other times it maneuvered in tight spaces. There are TIE Fighters blowing shit up, and our new pals Rey and Finn4 meeting space-cute. And then, finally, yeah, Han and Chewie, bringing us home. We’re done. Roll over and take a deep breath. We’ve all earned it. That’s a lot of feelings to plow through in two minutes. Ready to do it 30 or 40 more times today? Han’s old, but he’s ready to go again. 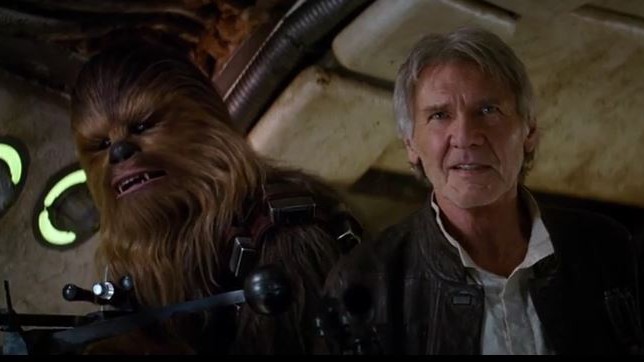 There’s only eight more months of this until the movie’s out. And we haven’t even seen Luke and Leia yet.

Wedded Blitz! The Rites of Spring