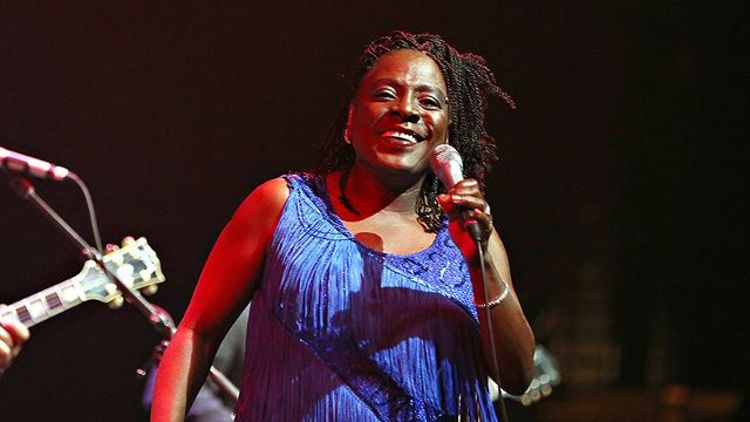 Sharon Jones and the Dap-Kings, “Stranger to My Happiness”
The new album by Sharon Jones and the Dap-Kings, Give the People What They Want (due January 14), is yet another rock-solid homage to gritty ’60s soul. But given Jones’s recent battle with cancer — she had surgery to remove a tumor from her bile duct last June — it’s a little extra special to see Jones back in the game with renewed vigor. The video for the new single “Stranger to My Happiness” was filmed in November, and the effects of Jones’s chemotherapy treatments are evidenced by her bald, beautiful head. The joy in Jones’s performance, however, remains unchanged.

The Men, “Pearly Gates”
[protected-iframe id=”89f0160af179e3e7b5140dfb58477163-60203239-57735273″ info=”https://w.soundcloud.com/player/?url=https%3A//api.soundcloud.com/tracks/128170663&color=ff6600&auto_play=false&show_artwork=true” width=”100%” height=”166″ scrolling=”no”]
I saw Brooklyn punk band the Men twice in 2013. The first time they played maybe four songs I recognized — much of the set was composed of new material, even though New Moon had been released the day before — and were in full-on Everybody Knows This Is Nowhere folk-rock mode. The second time I didn’t recognize any of the tunes, perhaps because the Men blazed through the set playing blindingly fast, balls-to-the-wall punk. No band has veered as freely (or capably) between these extremes since the Meat Puppets, and it continues on the Men’s forthcoming record, Tomorrow’s Hits (the group’s fifth full-length since 2010). The LP splits the difference between the disparate sides of the band’s split personality, presenting a collection of darkly melodic strummers played with reckless aggression. (The newly released “Pearly Gates” is the record’s sloppiest, most sprawling cut.) I’m still not sure whether the Men would be better off putting out fewer albums with a better hit-to-miss ratio — I like everything the Men have released thus far, but they haven’t quite made the top-to-bottom great album that they seem capable of. But there is a clear progression in the band’s songwriting. Just as New Moon improved on its predecessor, Open Your Heart, Tomorrow’s Hits inches the Men ever closer to transcendence.

Speaking of prolific rock bands, Drive-By Truckers return in March with a new record, English Oceans. I’ll have more to say on the album in a few months, but for now let’s talk about the LP’s opening track, “Shit Shots Count.” The song is indicative of what the rest of English Oceans is like: dark, murky, Stonesy, and best suited for blasting after midnight. (Also notice that it’s sung by Mike Cooley, who stepped up his songwriting to pen half of the album’s tracks, with the other half coming from chief songwriter Patterson Hood.) Now down to a five-piece, Drive-By Truckers have essentially refashioned themselves into a gutbucket garage-rock outfit on English Oceans, and “Shit Shots Count” ranks among the album’s flintiest tracks.

Olsen’s 2012 debut LP, Half Way Home, was an intense and otherworldly collection of austere psych-folk that dared you to listen with the lights off. On her new record, Burn Your Fire for No Witness (out February 18), the volume of Olsen’s guitar occasionally rises to match the electricity in her voice, like on the rocking single “Forgiven/Forgotten.” But even when Olsen brings things back to a whisper on Witness, she’s never less than gripping.

Hard Working Americans are a supergroup of sorts led by one of my favorite contemporary singer-songwriters, Todd Snider, a wise-ass populist from East Nashville with a talent for turning out brilliant narratives about hard-luck losers toeing the line between poverty and criminality. (If John Prine had jammed with Elmore Leonard in the ’70s, he would’ve ended up with a Todd Snider record.) For HWA, Snider is joined by bassist Dave Schools (Widespread Panic), guitarist Neal Casal (Ryan Adams, Chris Robinson), keyboardist Chad Staehly (Great American Taxi), and Duane Trucks (King Lincoln). The band’s self-titled debut (out January 21) collects standards and more recent, lesser-known gems that address the themes that have preoccupied Snider in his own songs — namely, the temporary highs and long-term lows of living life on America’s outskirts. “Stomp and Holler” is a great Hayes Carll tune about the highs.

Indian, “Rhetoric of No”

Your mid-column metal smoke break, courtesy of Indian’s upcoming album, From All Purity, due January 21.

Modern Baseball, “Your Graduation”
[protected-iframe id=”fb65c3a54c8244f16390d7e96deafb07-60203239-57735273″ info=”https://w.soundcloud.com/player/?url=https%3A//api.soundcloud.com/tracks/124016262&color=ff6600&auto_play=false&show_artwork=true” width=”100%” height=”166″ scrolling=”no”]
Brendan Lukens sings in a bookish deadpan that slips explosively into full-throated recriminations. (Imagine Colin Meloy after a round of Jäger shots.) You’re Gonna Miss It All (out February 11), the debut by Lukens’s band, Modern Baseball, is loaded with conversational broadsides like “Your Graduation” that do deep dives on the neuroses of young people killing time with booze and haphazard romantic couplings as the ignition on adulthood sputters. (Let’s just say that the album title is intended to be ironic.)

Insanely catchy pop-punk, like magnets, is a miracle. How does it work? Only the Juggalo (or Juggalo-dressed band) knows.

Filed Under: Songs of the Week