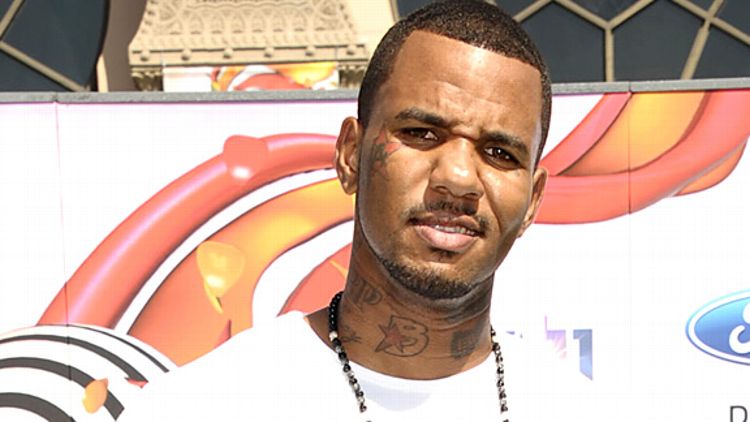 Game feat. Kendrick Lamar, “The City”
The Game returns! His oft-delayed R.E.D. Album has leaked a week ahead of its official release date, and it packs heaters. So far nothing sounds better than “The City,” a Cool & Dre-produced bit of melodrama in which Game is utterly and comprehensively upstaged by the young Kendrick Lamar — whose tricky, over-enunciated flow continues to be a delight wherever it pops up — and then, with his trademark lack of self-awareness, proceeds to declare himself one of the top five rappers of all time anyway.

Jessie J, “Domino”
None of the tracks off Jessie’s debut, Who You Are, took off stateside — but her team did not give up! They called up Dr. Luke for an emergency songwriting session that bore “Domino.” This cheery trifle is almost soul-crushing in its familiarity, and therefore should make Jessie J a huge star.

Pusha-T feat. Kanye West and Young Jeezy, “Amen”
While we wait for the allegedly fully Kanye-produced Pusha solo album, here’s this: Push and Ye, plus the suddenly everywhere-again Young Jeezy, talking shit on a Shawty Redd beat. It never quite rises above “throwaway mixtape track” status, but whenever we get Kanye inciting civil disobedience (“In Egypt, they fightin’ for freedom/ Cop pull you over no reason, beat him”) it’s no waste of time.

Crooked I, “Fast Car”
Crooked I, the veteran Long Beach rapper currently operating as one fourth of the Shady Records signees Slaughterhouse, is a rapper’s rapper, all solid constructions and minimal flash. Which means he’d probably look you in the face and tell you with all honestly that no, he doesn’t find anything amusing about sampling Tracy Chapman’s “Fast Car.” This is a terrible idea, sure, but it’d take a whole hell of lot more than po-faced storytelling verses to ruin “Fast Car.”

Lenny Kravitz feat. Drake, “Sunflower”
On his comeback album Black and White America, Lenny Kravitz enlists old friend Jay-Z and new friend Drake for ill-advised features. The funny thing about the second collaboration is that Drake is actually pals with Lenny’s daughter Zoe, so it’s a very realistic possibility Kravitz got the verse by calling his kid up and being like, “Hey, um, sweetie, can you ask Aubrey for a favor?”

tUnE-yArDs, “Gangsta” (Ad-Rock remix)
Merril Garbus, who records experimental pop as tUnE-yArDs, has charmed the pants off the nation’s music critics. Also enamored, apparently, is the Beastie Boys’ Ad-Rock, who popped up this week to chop Garbus’s “Gangsta” up even more than it already was. Related: Anyone remember Ad-Rock’s BS2000? Underrated!

Mastodon, “Curl of the Burl”
Should you know what a burl is, or worry about what curling it entails? Hell no. Mastodon is back to blow your face off. Worry about that stuff later.

Jeff Mangum, Live Recordings
Neutral Milk Hotel front man Jeff Mangum was the most famous reclusive indie-rock person for a while there, but he’s back now on a low-key tour playing the old classics. Sure, it’s a drag that some of that hermit-mystique is gone, but its probably nice getting paid to play music again, right, Jeff? Also, he’s apparently taken care of his voice, because he sounds exactly the same.

The-Weeknd, “Thursday”
The-Weeknd just dropped his new mixtape, a followup to the blog-beloved House of Balloons from earlier this year. We haven’t really had a chance to listen yet, but there is a song on here called “Heaven Or Las Vegas” so we’re pretty sure this dude is still doing a lot of drugs.

The Rapture, “It Takes Time To Be a Man”
This is the last track on the Rapture’s first album in six years, In the Grace of Your Love, and it’s so wonderfully appropriate in context that we almost feel bad plopping it all the way down here. Still, let’s ride out to this one.


Songs of the Week: Beyonce Gets an Assist From the Roots and an Animated Piano Player
Grading The Week’s Top Country Songs

Trailers of the Week: 50/50, Drive, and Lots of Sam Worthington