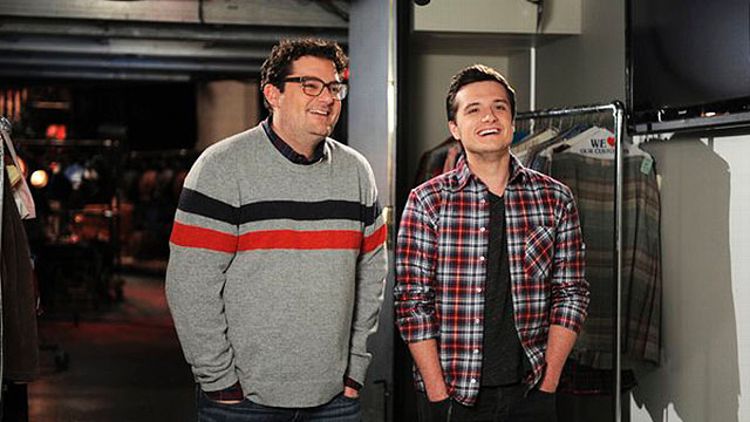 I was worried for my man Josh Hutcherson. After a series of SNL episodes hosted by people with big-name recognition and/or scrolls of juicy press — Gaga! Miley! Edward Norton! — and plenty of material to spoof, Hutcherson is mostly known for playing Peeta in The Hunger Games (or perhaps you were a Laser-head fan of The Kids Are All Right, and I would not take that away from you). Several times over the week leading up to Saturday’s episode, I would ask myself, “Who’s hosting SNL?” and have no idea what the answer was. A year ago, when Jennifer Lawrence hosted the show, a Hunger Games panel skit poked fun at Peeta’s diminutive height and the relative dimness of his star next to the almighty glowing J-Law. In fact, Hutcherson was a funny and subtle performer, even if he rarely took the lead on SNL; there were no traces of a big, throbbing ego, and his subtlety complemented the material — the strange, strange material. “Bugs: Where the Heck Do You Gotta Be?” and Beck Bennett’s baby-bodied “Office Boss” gave me the same sillies as Zach Galifianakis’s “Darrell’s House” did earlier this year (Parts 1 and 2).

George Zimmerman was the target of the cold open, which featured Taran Killam’s Piers Morgan (the “tiny little fool of news”) interviewing Zimmerman’s girlfriend, played by Kate McKinnon. Because we’ve all had enough of Zimmerman himself by now, the show featured Beck Bennett as George Zimmer, the recently fired face of Men’s Wearhouse, who’s still processing the fact that he shares “two-thirds of [his] name” with such a disreputable character. It wasn’t great, but hey — it also wasn’t long. Miss you, Rob “Bobby Moynihan” Ford. You were worth the sacrifice of Bobby Moynihan’s ankle.

Hutcherson’s opening monologue ended up being the only use of The Hunger Games: Catching Fire material, and though I loved McKinnon’s Effie Trinket (played in the movie by Elizabeth Banks) and her floral choker below the paleface, I thought it was interesting that it was mostly a vehicle for the rest of the cast. Noël Wells’s name was chosen from the lottery first (she’ll have to kill the other chosen not-ready-for-prime-time tribute, naturally), but that coveted screen time was yanked away by a bow-and-arrow-equipped Cecily Strong. Kenan Thompson, in a leisure suit, mistook the bowl of name slips for a key party, and Hutcherson expressed his surprise that The Hunger Games was based on a book. (Side note: He hadn’t read Bridge to Terabithia before he was cast in the movie adaptation. What’s up with that? Don’t they make you read it in sixth grade to scare you out of hoisting yourself on ropes to get across streams in the forest? Well, they should.)

As a swoopy-haired a cappella dreamboat in “Girlfriends Talk Show,” Hutcherson had the honor of singing his portion of a One Direction cover, which without his fellow vocalists was reduced to a lot of “Baa”-ing. The Girlfriends have never been my favorites — though the last time we gals met up it was one of our better hangs — and part of me wished that more time had elapsed since they appeared last month. Still, Aidy Bryant is coming into her own (and entering womanhood right now), and I really would like to one day see Keira’s (Cecily Strong) “crazy” boyfriend who likes to watch her eat beef nachos through opera glasses. I think she’s dating Kenny Powers.

Some people are ambidextrous. Others know how many marbles you have in a jar on your mantel. Beck Bennett can impersonate a baby, and how. Bennett has obviously studied babies in their natural habitat, because “Office Boss” was just too good, and too real, to be a fluke. It’s the same premise as Will Ferrell’s famous cat bit: a grown man in an office, body-snatched yet still respectable. Bennett’s “IQ of a genius” didn’t make him immune to the urge to slap his own legs, smear spaghetti on Hutcherson’s and Killam’s faces (in addition to the top of his own head), and flopping on his butt like it was padded with a size-6 Pampers. Hutcherson wasn’t the star of this sketch, of course — Bennett and his noodle-body were — but he respected the script with a straight face and unwavering finance-guy seriousness. Not that Bennett needed it, but Hutcherson helped him stand out as more than just a digital-short performer. It was a great chance to see what Bennett could do, and what his humor brings to the table.

OK, New York. This is your “Californians.” The Matchbox 3 subway dance crew, consisting of Kid Float (Thompson), Amir (Jay Pharoah), and Lil’ Peanut (Hutcherson) is a regional joke. I know that performance art on crowded subway cars is an issue for you, so I’ll have to assume that Hutcherson’s “running neck” and stirring the espresso instead of the pot in accordance with fire codes/space constraints was dead on. I felt it when they moved into an elevator — that I can really relate to.

Haim is a band that is often foisted upon you, like Chvrches, especially on the Internet. I didn’t expect to like the band’s performances as much as I did. There have been so many comparisons between Haim and other artists (Stevie Nicks, Sheryl Crow, Tom Petty) that it’s useless to provide another, so I won’t even go there. Their gratitude at being featured on SNL was palpable, and Este’s bass face was in full effect. In both their first (“The Wire”) and second (“Don’t Save Me”) performances, the sisters delivered pop that didn’t feel like it was pandering and was nothing like the cute or “quirky” set I expected. It wasn’t explosive, just pleasant and undeniably catchy.

At the “Weekend Update” desk, after a great image of Justin Bieber wearing a party hat and a sad face was trotted out as the reason for his party complaints (no one came), we were introduced to the Worst Lady on a Plane (Bryant) and her firm neck pillow and plastic bags of odoriferous takeout. Bryant hustled this bit, but I still felt like we’d all sat next to worse people on planes (I mean, if she’s gone to the bathroom to smoke and sleep, that’s more space for your elbows). This had to have been a safe space to tackle the nose-whistlers, over-chatters, and people with the wide-brimmed hats that knock you in the eye.

Hutcherson’s biggest role was as Josie’s younger brother in a sketch that took its inspiration from the lyrics to “Your Love” by the Outfield. Cooing to a sea of ’80s-clad ladies (including Haim), Hutcherson karaoke-serenaded Vanessa Bayers with extra neck swivels, sometimes accompanied by Killam and Thompson for emphasis as they performed through the windows. In his brave mullet, I especially liked how downcast he was when he explained that he had nowhere to run when he was in trouble. It did seem kind of cheap to throw “Jessie’s Girl” at us in the end, though, that radio slut. Jessie is just so easy, so tired. I’m sick of Jessie’s girl; I wish she were Gary’s girl, and I have no warmth for her. It’s personal.

Want to hear about more things I didn’t like as much for a second? OK: I don’t like the “Best Buy” sketches no matter who’s in them, except for Mandrew (Killam), and he’s just a murder-eyed side dish. Hutcherson played a respectable boss, but I don’t think I’m alone in wanting to retire this setup. Though the digital short that followed it wasn’t my favorite of the new era, it was by no means bad. “Dancing” was weird, with what we can now recognize as Kyle Mooney and Beck Bennett’s signature clipped conversations and alternate-universe rules, but I like the idea of hitting a television with a VHS tape to make it play and updating real-time paper headlines. These shorts are admirably ambitious, and even when they don’t totally succeed I appreciate them being there.

In a similar way, I appreciated the cameos made by a live bunny and turtle in “Animal Hospital,” which otherwise made me sort of depressed. All of the animals at this veterinary practice die, and then their owners have to sign a lot of forms. Ha ha ha! It’s impossible to fault any of the players in this situation, though, especially Hutcherson, who flexes his Southern accent and bored-yet-jazzed receptionist energy.

I’ve been keeping my eye on Mike O’Brien all season, and now I finally got to watch him harass bugs for interviews on the street. Along with “Office Boss,” “Bugs: Where the Heck Do You Gotta Be?” was my favorite of the night. O’Brien was hired out of the writers pool after two unsuccessful auditions to join the show’s cast (once in 2005 and once in 2009); after Seth Meyers leaves for Late Night, he’ll be the oldest performer. There’s something about O’Brien’s humor that strikes a different tone than most of the other new players, maybe because he has a unique understanding of the inner workings of the show and its jokes. Whatever it is, I like it, and “Bugs” made me laugh more than anything on the show since — well, since “Darrell’s House” Part 2. Eating garbage and fat-shaming cockroaches to tuba music, O’Brien (as interviewer Winston Sam Bass) was speaking my language. When he handed things over to his younger brother Lance Sam Bass (Hutcherson), it didn’t seem possible to carry over the momentum, but the guest host was handed the best joke (a giant live moth roars that he/she is “GOING TO THE SUPERMARKET!” and scuttles off). Bonus points for the prosthetic eyebrows, of course.

Guess who’s coming to (Thanksgiving) dinner? Her name’s Elyse, and she’s a turkey. I think that this episode might have had a hard time picking its final sketch, because so many of them could have subbed in the 10-to-1 wild-card spot, but it looks like turkey cannibalism won out. As a young fella bringing his special lady home for the holidays, Hutcherson made out with a beaked Bayers and took the blame for the fact that his dad was busy gutting the stuffing out of her former neighbor. It was an emotionally realistic take (also realistic: the actual turkey running from the house in the final shot), so it was almost alarming: Of course she faints! Then again, at least she didn’t meet Hutcherson in the animal hospital.

It was refreshing to spend a Saturday night with Hutcherson. What we knew about him going in was relatively scant: He seemed like a good guy and a talented actor, but without going down the well-trodden Hunger Games road, we weren’t left with a lot of preordained issues to address or notes to hit. The writers were given more topical freedom and a willing participant, and that’s when we can hope for things like “Office Boss” and “Bugs.” These were sketches written with bass face.

Filed Under: SNL, The Hunger Games