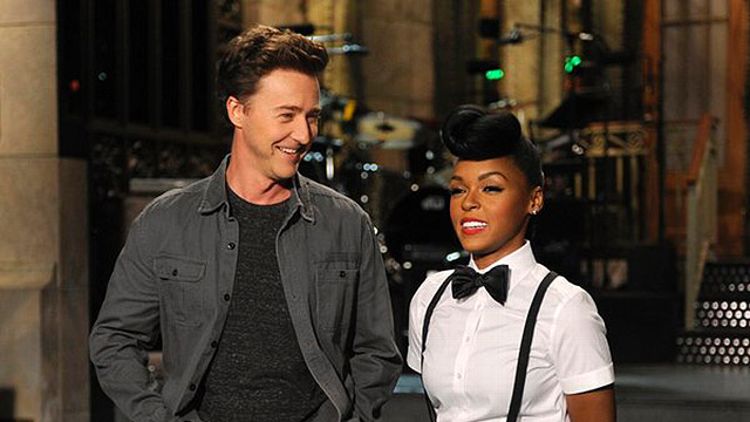 Man, was I nervous for Edward Norton. The last episode of SNL, which was followed by a two-week break, was rough. Bruce Willis mumbled, the sketches were overall pretty weak, and someone in the comments of my recap wished that Willis had busted out his cover of “Under the Boardwalk” to save the sinking ship (someone also suggested that SNL was just going to feature the whole cast from Moonrise Kingdom). That’s not a good sign. This past weekend’s host, Edward Norton, has a reputation for being, uhhh, controlling, and without Norton having a current project to promote, it was hard not to worry that this week would suffer from the same problems that plagued it last time (and though Norton has proven his comedic chops with Everyone Says I Love You and Death to Smoochy, he’s still much better known for his more dramatic contributions). Instead, Norton was smooth, game, and ready to get weird. I might go so far as to call him a Mrs. Dalloway — the perfect host. And though the show wasn’t perfect, it almost seemed as though some of the criticisms launched in its direction recently — Pharoah’s Obama, the one-note jokes of “Weekend Update” guests like Anthony Crispino (secondhand news reporter) — had been heard and processed.

The cold open featured Kate McKinnon as Kathleen Sebelius, addressing the technical foibles faced by anyone who dared try to access the Affordable Care website. McKinnon offered tips to bypass the issues, such as using the low-res version of the site (“U WANT DOCTR?”) or logging on in another language (say, Icelandic). Besides jokes about the spinning beach ball of death, Encarta ’95, and “free” AOL hours, which are always welcome, it was nice to see a current events/political opener that didn’t feel formal or dry. Norton’s monologue followed, and with it came everything you were hoping for: impressions, guest stars, and enough self-referential material that it came off as personal even though it was anything but (Norton is Method, and joked — I assume, though I’d love it if this were true — that he’d been approached by Lorne Michaels for the hosting gig 13 years ago, and had been preparing ever since). Alec Baldwin was summoned, or at least thought he had been summoned, and gave Norton his very special SNL warm-up method: give a google-eyed take to the camera, then bust out your impersonations (Norton’s Woody Allen > Woody Harrelson > Ian McKellan), though not unprompted (save your William Hurt for when somebody gives a damn! Actually, I would have given a damn). Miley Cyrus also appeared with three handy guidelines: Have fun, keep your energy up, and do your tongue like this. She stuck around, too, bless her little creature buns.

Now let us get seasonally intimate, for we were treated to a parody ad selling Autumn’s Eve Pumpkin Spice Douche. My only real complaint here is we didn’t get to see spicy steam rising from Edward Norton’s fly, but I will gladly accept a sketch about McKinnon, Aidy Bryant, Vanessa Bayer, and Cecily Strong’s cinnamon-scented front-bottoms. (I had an iced pumpkin spice latte the other day and its color and taste were just too creepy for words when presented cold. All of a sudden I thought, Holy hell, has this been gross the whole time? Now that it has a hashtag, it’s dead to me.)

There were many great things about “Stranger Danger”: Nasim Pedrad front and center, great pacing, and Norton as the cop warning a classroom of students about Stranger Danger. Pedrad has been sidelined lately, which is a shame because her many variations of weird teenagers (Bedelia!) are one of my favorite recurring bits on the show. This time she played a blonde candy fanatic named Shalon (not Shalom) whose logic proved stronger than Norton’s (a dude’s packing Skittles? “Get in that van!”). She was so persuasive she crowned herself “the Vans of acting.” Norton played his cop with tremendous realism thanks in large part to his mustache, which made the sketch feel more polished than it would have otherwise. He carried this naturalism with him to the next sketch, even as he was faced with Steve Harvey’s (Kenan Thompson) giant teeth and fear of Satan. As the owner of Spooky City, a Halloween costume store, he had a penchant for puns, which are not really in Harvey’s wheelhouse (especially when so many invoke the devil or Facebook). This was probably the best SNL edition of Steve Harvey yet: Thompson’s Harvey had some character development (I would have watched him officiate a deviled eggsorcism) that kept it from stalling.

The next sketch was even better: a preview for Wes Anderson’s new horror movie, The Midnight Coterie of Sinister Intruders (rated G for fox puppets). Taking advantage of Baldwin’s presence in the best way possible (he provided voice-over for The Royal Tenenbaums) and saddling Moonrise Kingdom star Norton with a blond wig as Owen Wilson was nothing short of brilliant, as was Noël Wells as Margot (Gwyneth Paltrow). The sketch was dead-on yet gentle, a very respectful skewering (an embedded New York Times review gushed “You had me at Wes Anderson,” while Fangoria was just confused). Among the weapons used by the murderers: a protractor, a ship in a bottle, and a picture of Edith Piaf.

Where to go from there but to the weird place? Like, say, an office boardroom where two exterminators (Russell, played by Norton, and Mitchell, played by Brooks Wheelan) confront possums in an air duct during a marsupial funeral? I was impressed by Wheelan, who’s coming out of the gates as a strong player so far, but not as much as I was by Norton’s many-textured mullet, teeth, and glasses. This was an excellent test for Norton, because it required a lot of humility (he doesn’t know whether the deceased possum “was a leader or just, like, a charismatic citizen”) and squishing himself into a tunnel with invisible animals who do impressions. Speaking of impressions, the next skit was the first of my only two gripes with this episode, and it featured Norton as a Rain Man–esque prodigy whose only ability was to count the things in a room. Though the joke was established too early, the scene still ended abruptly as though acknowledging that it was the runt of the night.

Janelle Monáe, performing first “Dance Apocalyptic” and then “Electric Lady,” was as energetic and charismatic as her fans knew she would be. The stage was set in kaleidoscopic black-and-whites, and Monáe pranced around (and moonwalked) while she belted like a pro. Even her backup dancers were amazing. I wrote “FIERCE” in my notes, which is kind of embarrassing, but that’s exactly what she was: poised yet improvisational. Energy-wise, she reminded me of when Macklemore musical-guested on the show last season, which actually seemed like a PSA against scrambling around the stage like a funky spider, but this was a totally controlled chaos. Monáe transcended the audio and mixing issues that always plague the SNL stage, grabbing us and not letting go.

My big takeaways from a shorter-than-usual “Weekend Update”: an alligator walking into Walmart would, actually, make a great state flag for Florida, and maybe I don’t dislike Moynihan’s Anthony Crispino as much as I thought. Now that Crispino has his own creepy prejudices (old people can’t marry — “The man can be older, but the woman? Ugh”) and a voice that ventures into Mariah Carey territory (literally), he’s finally flying free — though obviously I still prefer my Uncle, because he’s family. A middle-of-the-roader followed: “12 Days Not a Slave,” which cast Norton as a Canadian abolitionist opposite Pharoah’s two-weeks-free former slave Cecil. I was really digging Norton’s jerky physicality and historically accurate beard, but Aidy Bryant stole the sketch with one line (“These have been the best 12 days of my life” romantically) and a coy smile. That line could have been hard to pull off, but Bryant did it perfectly. Not even Miley as an ancient twerker could snatch it back. Unfortunately, “Ruth’s Chris” was a bit of a dud despite the best efforts of the cast, a group of virginal waiters who were all practicing the moves that they hoped to employ in the near future when they finally got laid. Some of the material was good — I was especially feeling on Norton’s sexual-athletic moves as Intensity Man, Strong’s sexy Dracula, and Mike O’Brien’s “I hear that, son”s — but it was stuck in too small a playground to really gain any ground.

Maybe the problem when Bruce Willis hosted was that he didn’t seem to be having much fun. Whether that’s actually true isn’t important, because this late-night audience is a pack of vampires: All we care about is the visible fun that we can latch on to and enjoy by proxy. The true measure of how much fun a host is having is a 10-to-1, in which they’re asked to do things that only play well when they’ve assimilated with the cast and writers. Norton’s 10-to-1 could not be mistaken for the kind of sketch that would wind up in an earlier time slot, because it slammed the accelerator down and drove off the cliff into Crazyland right off the bat. Initially, I thought Norton was resuscitating Bill Hader’s dearly missed Vincent Price, but instead he was just a different weirdo who wanted to show you all of the contents of his Halloween bucket with assistance from his son, Diego, a.k.a. Bones (Moynihan), and a lady named Adult Ruth (Bryant, not be confused with the infant candy bar). Norton’s creepster was mildly perverted (for a Klondike bar, he would gladly “suck everything you put in front of me — I’m serious, I don’t care”) and deeply sinister (the razor blades are still in their original packaging, so “this time they’ll have to arrest me for generosity”), yet this one was far from alienating, and that was to Norton’s credit. He was fey without being offensive (see Willis’s Michael Kors) and made it impossible to tell if the writing was just uncommonly tight or he was just an actor who could sell it better than most.

At the close of the show, Norton asked, “Has anyone ever had more fun than I just did?” and then answered himself: “No.” He may not be promoting anything, but he cast himself in a new light this Saturday as a happy, eager collaborator. There was no question that he had trusted his material and respected its creators and his fellow performers. Honestly and willingly, what he sold was himself.