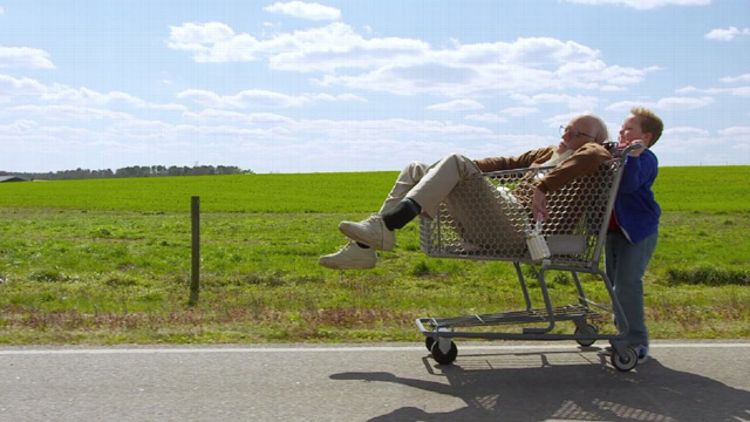 Given its $32 million opening weekend, Bad Grandpa seems certain to get a sequel in the not-so-distant future. Given how lo-fi the production is, in fact, it’s quite possible that once the box office started to look pretty good on Friday, the Jackass stars and crew spent Saturday and Sunday making said sequel. In case they didn’t, here are a few ideas they might consider incorporating.

The premise of Bad Grandpa finds recent widower Irving Zisman (Johnny Knoxville) getting rooked by his daughter Kimmie (Georgina Cates) into driving his grandson Billy (Jackson Nicoll) across the country to North Carolina so that Billy’s father Chuck (Greg Harris) can take care of Billy while Kimmie is in prison. Along the way, Irving and Billy get into all sorts of crazy, outrageous scrapes of the sort you would expect from the “Jackass Presents” half of the title. What you don’t expect from the Jackass imprimatur is … that there will be any story at all.

I can imagine that the recent films of Sacha Baron Cohen — Borat, Bruno, and The Dictator — may have led the Jackass crew to believe that audiences need a narrative through line to hang the pranks on. But without the story, there would be room in the movie’s running time for even more pranks. The movie’s called Bad Grandpa. It’s a grandpa who’s bad. That’s as much story as we need.

As you will have seen in the trailer and/or TV ads, Bad Grandpa includes a prank where Irving ruins his own wife’s funeral, and one where he falls into a table full of champagne glasses at a wedding, and one where a kiddie ride outside a thrift store “malfunctions” and launches Irving through a plate-glass window and into the store.

These have their charms, of course, but at this late date — a decade and a half into the reality-TV era — the more elaborate the setup, the harder it is for an audience to take it at face value. The wedding Irving and Billy crash, for instance, looks totally fake from the second we see the sign outside. That’s not to say there weren’t any plants involved in the pranks in the original Jackass movies, but the simpler the bit, the easier it is to buy.

Don’t get me wrong: I love Johnny Knoxville. I love him as much as any 14-year-old boy does, which is to say, a lot more than is reasonable for a 38-year-old woman. I would never begrudge him the opportunity to headline a Jackass movie all by himself. But I missed the other guys!

There are lots of ways to incorporate members of the original Jackass cast in a sequel. Maybe Irving has some other equally inappropriate geriatric friends who, for instance, also get their genitals caught in vending machines. (Though why go back to that well?) Maybe Irving is accompanied in his adventures through the world by grandsons in their thirties who tend to push him down stairs or into traffic. Nicoll is as good a foil as a pre-tween kid could be. But I bet Chris Pontius would be even better.

By far my favorite part of the movie came with the closing credits, as we saw how various situations were set up, how the marks reacted when they learned what was actually going on, and how much fun everyone involved had making the movie — all of which were essential elements of the previous Jackass movies (and the Jackass TV series before it).

It’s not only that transparency helped sell the pranks; it’s that seeing the construction of a full 360 skateboard track helps heighten the suspense as you wait for someone to fall off its apex, maybe to his death. It was also fun to see how much the knowing participants in the pranks were not looking forward to doing them and/or actually mad about it.

If you still plan to see the movie and don’t want a fun Easter egg revealed, stop reading here.

At the very end of the movie, we discover that the corpse of Irving’s wife — which is, obviously, a significant part of the funeral prank, but which also appears in other contexts (and by “contexts,” I mean the trunk of Irving’s car) — was “played” by Catherine Keener, who previously worked with producer Spike Jonze on Being John Malkovich. By this point, Jonze has a pretty deep bench of past collaborators; maybe in the sequel, Meryl Streep could pretend to be helping her dear old Uncle Irving pick out a Speedo?

… OK, Streep might be a stretch. But Jonze just directed Joaquin Phoenix in Her, and you know that guy’s up to fool a bunch of chumps with his extreme commitment to a bit.