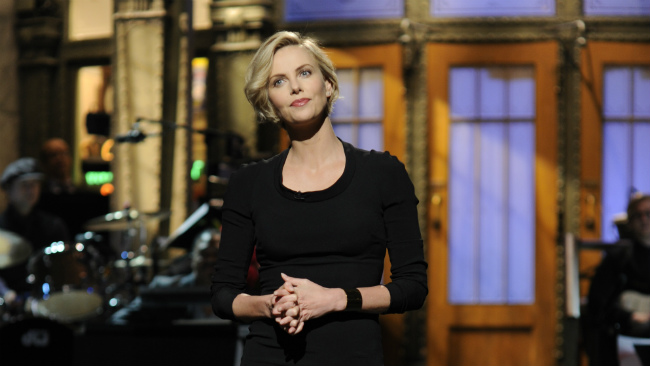 Charlize Theron is even more appealing than usual when she’s gone out of her way to make herself look unattractive. It’s not just her Oscar-winning performance as an eyebrow-less Aileen Wournos in Monster: on SNL this past weekend, Theron’s best sketch featured the actress, who stars in Seth MacFarlane’s upcoming comedy A Million Ways to Die in the West, rocking a mullet, a pastel-print sweatshirt, and braces. She also donned a little padding and some hard-core norm-wear for the digital short “Tourists,” and even though all she was doing was handing pedestrians a camera and then walking away, it was interesting just because somewhere in those layers was Charlize Theron. Maybe because she’s more known for dramas (not that The Road wasn’t hilarious) than comedies, Theron has a talent for creating multi-dimensional characters — especially creepy, troubled, bitter, or strange ones — like when she starred as Mavis Gary in the dramedy Young Adult and earned her character its own psychological evaluation.

Theron hosted once before, in 2000, and after seeing the final version of a Gemini’s Twin sketch (a recurring bit spoofing Destiny’s Child), she realized that the amount of singing she was allowed to do beside Ana Gasteyer and Maya Rudolph had been whittled away to nothing. Oh, did someone say singing? Why yes, so here’s a big chunk of cast members to remind us all that Theron is not perfect, because she can’t sing. But they can, and do, shushing Theron every time she tries to sneak a verse in. Of course, she’s great at plenty of other tasks, like performing ballet, speaking in foreign tongues or with accents, and being “so beautiful” that Cecily Strong could watch her forever (Beck Bennett, leering, agrees). There are lots of attractive people on SNL, hosts and cast included, but Theron’s beauty actually seems to require disclaimers or prosthetic foreheads in order for us to be able to focus on anything other than her divine symmetry. Is it like looking at a solar eclipse in a bucket of water so your eyes don’t catch on fire?

Before we’re deep in the recap, I need to publicly wonder why “Cocktail Hour” was scrapped from the show. I thought that there seemed to be some dead space during the episode (a shot of the band jammin’ out seemed like fishy filler, a real Steve Harvey Show ad that I was disappointed to discover was not a parody because it felt like there was room for one), and indeed there was: an installment of “Mornin’ Miami,” a stumbly sketch titled “Viper,” and this one above, which I loved. Taran Killam and Theron play weird variations on Who’s Afraid of Virginia Woolf‘s George and Martha, and at one point, Theron takes a shot out of an ice luge sculpture’s butt. If that’s not enough of a sell for you, then I can’t help you with your problem.

The Hallmark Channel’s Mother’s Day Game Show was good (and not the only nod to the holiday, which also featured into the cold open), but it belonged to McKinnon; despite the opening line “I hope we are all breathing deeply from our anuses” and a dramatic breast-grope for Aidy Bryant, Theron’s recently-fired-teacher role on “Girlfriends Talk Show” just seemed kind of out of place. “Girlfriends Talk Show” always has some good jokes (The Gynie Monologues, the Vagina Monologues for teens), but the format isn’t always easy for hosts (I see you, Miley). It’s easier to sidle up to motivational speaker Heshy Farahat (Nasim Pedrad), who as you may recall shoots laser noises out of her hips. Her friend Gayle (Theron), with whom she apparently shares a wardrobe, doesn’t just hit her marks, she’s got a spool of rainbow scarves in her mouth. Dude, that’s magic.

After seeing both Barbara Walters and Drunk Uncle at the “Update” desk, everyone was feeling like a little beach party over by the gaseous, exploding whale corpse. “Bikini Beach Party” featured Theron as a vintage tween beach bunny on her way to a hot date with an older man (Killam) on the stinky side of the shore. The lead-in is so great (wiggle-dancing, the line “I love surf music, it’s just kind of nothing”) that I wish there had been more laughs on the way to the punchline, which was, obviously, a whole mess of whale guts exploding onto Theron and Killam (while he was playing the ukulele and serenading her, no less). I bet this is not a popular highlight, but I laughed at “I’m blind with whale guts!,” so this paragraph remains. Perhaps “Dragon Babies” was more of a general people-pleaser. How great is the name “Rick Shoulders”?

Well, first things first. There are kittens. I think one kitten may have played the roles of Bandit, Jo-Jo, and Hijinks, but that cat did one hell of a job (and as we learned last year, cat acting is an art). Even minus the stage presence of Damian, a “feline sociopath” who “commits atrocities” when he’s out of his mind, this still would have been my favorite sketch of the night. Theron and McKinnon play a pair of cat-adoption facilitators who are either involved in some kind of ultra-intense mutual relationship or McKinnon is getting stalked like a fieldmouse. Either way, it showcased one of McKinnon’s great strengths — filling with energy like a balloon, but letting out the tension in a tiny stream — with one of Theron’s, which is playing a total weirdo who seems just about to lick your cheek. Don’t even try to feed Hijinks (actually a small jaguar) a hawk with a shaved head in place of her preferred protein, the bald eagle: “She knows the difference.” It was Theron at peak peculiar level, channeling the psychology of someone you’d probably cross the street to avoid. Dousing her bikini-clad figure in guts de la mer, reminding us she’s off-pitch, or giving her a slouchy costume and a bulky tourist camera are fine, but “Whiskers” showed an understanding and appreciation of Theron’s way with dark characters that’s always fulfilling to see on SNL. The writers probably also know how to cater to Andy Samberg, who returns to host for the season finale next week with musical guest St. Vincent.