Sequeltology Day 3: The Revenge of the Fallen 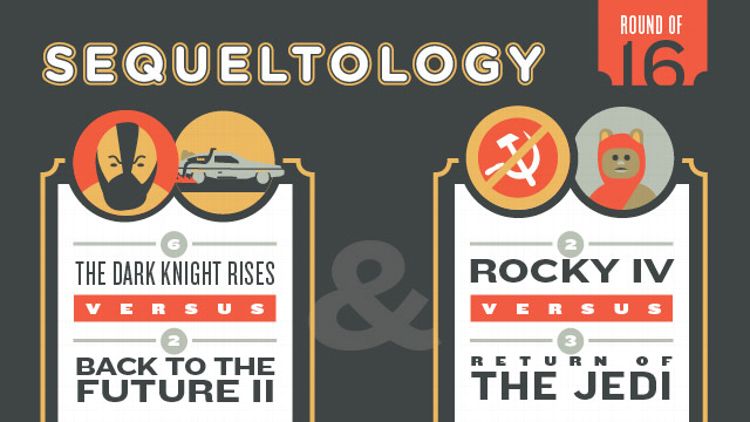 Christmas Vacation (lost to Dark Knight)
“And when Santa squeezes his fat white ass down that chimney tonight, he’s gonna find the jolliest bunch of assholes this side of the nuthouse.” There was no chance the film in which Christopher Nolan single-handedly invented cinema was not going to steamroll a Vacation threequel that’s basically an Ernest movie, albeit an enjoyably profane Ernest movie.

The Color of Money (lost to Wrath of Khan)
Or Star Trek nerds versus Scorsese nerds, basically. Khan is for all intents and purposes the first Star Trek movie that actually feels like a Star Trek movie, but it hurts to say good-bye to Color of Money, one of those movies you never think about that can make your day, like electricity. On the snap, Vincent!

Bill & Ted’s Bogus Journey (lost to Aliens)
Only a monster with acid for blood would have voted against Aliens here. But the Keanu-killingly (and franchise-killingly) dark Bogus Journey is a funnier Seventh Seal ripoff than Love and Death. (I like these dailies of George Carlin on the cheap, glowy Styrofoam-Kubrick 27th-century set, teaching a music class with help from “Sir James Martin, head of the Faith No More Spiritual and Theological Center.”)

Temple of Doom (lost to Toy Story 3)
A regrettable defeat for one of the greatest exploitation films ever released by a major studio. This one was relatively close, but by the time the vote closed, Woody had locked Temple of Doom in a cage and lowered it into a lava pit after pulling its still-beating heart right out of its chest cavity.

Mission: Impossible — Ghost Protocol (lost to Rocky III)
If only Jeremy Renner and Tom Cruise had prepared to scale the Burj Al Arab by running on the beach in tiny shorts, their calf muscles glistening in the hot Saudi Arabian sun, before frolicking in the sea like men reborn. If only.

Wayne’s World 2 (lost to Last Crusade)
Whatever, man. If you weren’t part of the Waynestock Generation, you’ll never understand. 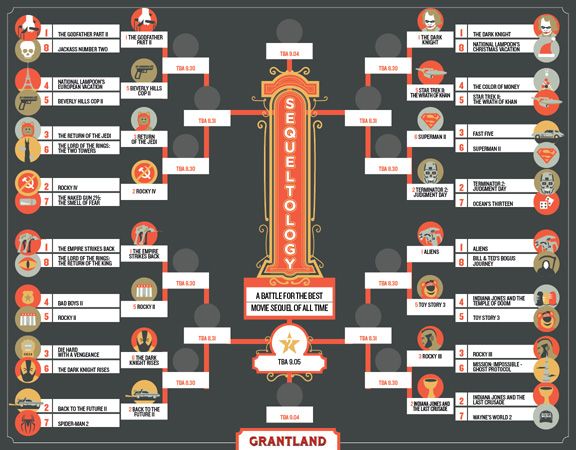 Shit is — to paraphrase how Will Smith put it in the senselessly-eliminated-Jesus-Christ-what-is-wrong-with-people Bad Boys II — about to get real; the field’s been narrowed down to mostly unimpeachable blockbusters, which means almost every movie still in contention is a sentimental favorite and this next round of eliminations will hurt like that bug Khan Noonian Singh puts in Walter Koenig’s ear hole.

I’m assuming Empire will flatten Rocky II without too much trouble, but that leaves two Rockys in play. Rocky IV vs. Jedi is essentially an ideological litmus test — do you prefer Cold War–era moral clarity, or asymmetrical warfare involving Ewoks? — in which Jedi has the slight edge just by virtue of being part of the Holy Trilogy. The 3-seed Rocky III–versus–Last Crusade matchup is too close to call, as is Dark Knight–Wrath of Khan.

I’m taking Aliens over Toy Story 3, easy; Terminator 2 blowing out Superman II, and The Dark Knight Rises over Back to the Future 2, which pains me. The only real upset scenario I see here is a tragedy-bump (RIP Tony Scott!) pushing Beverly Hills Cop 2 past Godfather II, which could conceivably open up the field for a Dark Knight versus Dark Knight Rises showdown, which would pretty much crack the Internet in half. In the words of Clark Griswold, holy shit, where’s the Tylenol?

Don't Worry, Rachel Weisz, We're Not in the New Terrence Malick Movie, Either