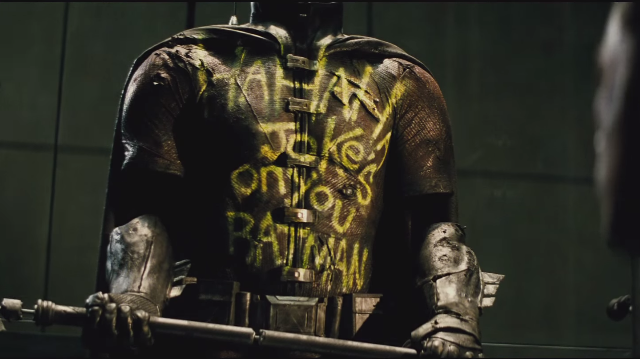 In the 49 years since the first feature film adaptation of the Batman character, trusty sidekick Robin has been played by only three men: Burt Ward, Chris O’Donnell, and Joseph Gordon-Levitt. Notice I said “men,” because even though Robin has historically been a precocious child in the comic books, he is almost always an adult on screen. Ward was 21 when he took on the role, O’Donnell was 24, and JGL was a ripe old 31. It’s hard to be a “Boy Wonder” if you have a 401(k) and a mortgage.

Presumably, the idea of a 10-year-old being dangled over a pit of boiling acid or fighting Killer Croc in the sewer is just less appealing in three dimensions. There’s that old chestnut that Batman is a next-level child abuser who risks the life of the young man in his care every single night. Still, as I said last week, comic-book fans increasingly expect a certain amount of adherence to traditional interpretations of comic-book icons. So, with the tease of a dead Robin in the last trailer for Batman v Superman: Dawn of Justice, fans began to speculate as to whether or not we’d finally get an actual minor in the role. And which version of Robin will be unlucky enough to die at the hands of the Joker? Dick Grayson? Jason Todd? Tim Drake? Damian Wayne? Carrie Kelley? Joseph Gordon-Levitt? So many questions, though we might finally have an answer.

The above photo is of Batman v Superman: Dawn of Justice director Zack Snyder with his son, Eli. It was dug up by Latino Review, piggybacking on a scoop from El Mayimbe that claims Eli Snyder will be playing Robin in a flashback. Considering this is likely a very brief cameo — not unlike Eli’s previous appearances in his dad’s movies — and that his only lines will be “Batman, watch out!” and “Oh shit, I’m dead!” this should not be a controversial decision. Still, some commenters on El Mayimbe’s original post felt like this was a violation of their trust. “I’m tired of the nepotism. Should have hired an actual actor for the role. Robin is worth more than just a nepototic [sic] stand-in,” said commenter Barchiel. You say nepotism doesn’t work, but Austin Rivers would beg to differ. Clear out, call that iso, and let Eli go to work.

Clearly, that commenter has not done research into the legend of Eli Snyder, high school football star. Oh yeah, almost forgot to mention that Eli was a standout quarterback at Maranatha High School in Pasadena, California. My bad. I buried the lede.

If the rumors are true, recent graduate Snyder will be the youngest actor to ever portray Robin on screen. Despite that milestone, the naysayers persist. I see you blinking mechanically at your computer screen, silently doubting my man Eli. He feeds on doubters — has his whole career. Oh, you think he’s not good enough to be America’s Next Burt Ward? Allow me to shut you up with these hot stats:

To portray Robin, you need to exhibit the following traits: loyalty. Trustworthiness. Poise. Vision. You’ve got to be loyal to Batman, you have to earn his trust, be poised under pressure, and see threats coming early. That sounds like a quarterback’s job description, doesn’t it? But don’t take my word for it. Let the homie Eli show you the truth:

I have four words for you: sorry for party rocking. Batman might not use guns, but Robin sure does. He has one where his left arm is supposed to be.

You think this part is too small to matter? You think that because Robin dies, there’s no way for the role to mean much of anything? Tell that mess to Chris Hemsworth. He was dead before the opening title of Star Trek, but next thing you know, he’s playing Thor. What I’m saying is, Eli Snyder is the next James Bond. As a great man once said, that’s not breaking news. That’s broken news.

On the field, he’s a viper, a cold, calculating assassin not unlike DC Comics villain Deadshot. Let’s not assume that he’ll lack that same clinical nature in front of the camera. He has the aforementioned “good skill set,” so I implore you to not disregard the man before he puts on the domino mask. Why can’t a natural athlete play former acrobat Dick Grayson or the expertly trained Jason Todd? Before you scoff, please consider all the great Elis in history: Eli Wallach, Eli Manning, Eli Cash, Eli Porter from the legendary Iron Mic competition. Time to add another Eli to the Mount Rushmore of Elis. It’s Eli Snyder’s turn.