‘Saturday Night Live’ vs. the World: A Statisticalish Study 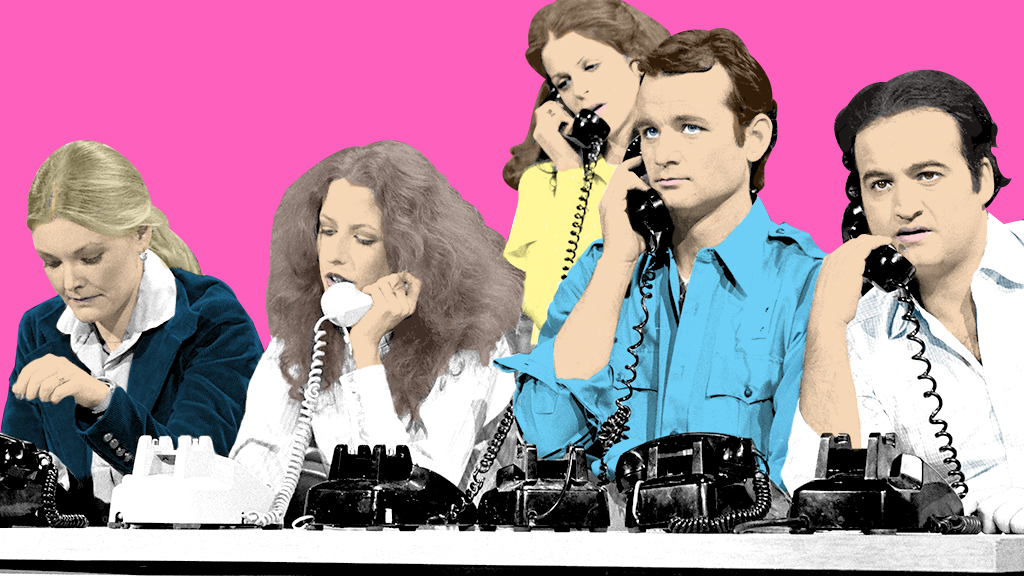 A graph of Saturday Night Live’s household ratings creates a shape like the Matterhorn over the show’s first five years, followed by a sheer rock face in the early ’80s that flattens into a long alluvial plain gently sloping down to the present, with modest hillocks and troughs along the way.

It would be beautiful as a skyline, but it’s not great for a television show.

What gives? You could explain the show’s ratings decline as a result of the proliferation of cable channels, which sliced and diced the viewership pie, the advent of DVR (not recorded in these numbers), and, above all, Al Gore’s invention of the Internet. You could argue the decline is a bit of a red herring — that the show still has relatively strong ratings in the context of network television. Or you could just buttress some surely true theories with some pretty charts.1

Theory I: SNL Ratings vs. Cocaine Use

In James Andrew Miller and Tom Shales’s Live From New York, Al Franken (now a U.S. senator for Minnesota) recounts the mountains of blow that fueled the grueling work of a weekly live variety show. “It was impossible to do the show without the drugs,” Franken says. Clearly and tragically, cocaine’s wages were steep. John Belushi died first, in 1982, and then it was Chris Farley, the man who most took after Belushi, from the same drug combination in 1997. Countless septa were obliterated. But from the powdery white haze emerged an antic, razor-sharp, and brilliant show.

Can it really be a coincidence that Saturday Night Live reached its heights between 1975 and 1980, when cocaine use (as measured in Americans between the ages of 18 and 25) was also at its peak? For those were the glory days of Pablo Escobar’s cartel, which flooded the U.S. market with cheap, relatively high-quality Colombian gold. And that was the golden era of a show born of the crucible of no sleep, feverish activity, and debauchery. Could Belushi’s embodiment of inchoate rage, Samurai Futaba, have existed without buckets of blow? Could the public have revered him as much had they not caught his sketches after hoovering a line of snow from the coffee table in front of the TV? (If you’re over the age of 35, don’t even pretend you weren’t high then, jittery and confident in a patterned silk dress shirt, reeking of Brut with a white penumbra forming around your nostrils.)

The zeitgeist had a bloody nose. It was sweaty. There was powder in the air. The question is whether the C17H21NO4  gave birth to the madcap antics of early SNL or whether it simply amped up our appreciation of it. Either way, as the data empirically prove, the combination of a coked-up show and a coked-up audience was ratings gold. SNL: another victim of the failed War on Drugs.

Too much prosperity and humor are enemy states. Poverty can be, too, of course, once a basic threshold of comfort is crossed; but before that threshold is guarded by sententious marble lions, humor has a home. That’s the sweet spot of hilarity: just barely making it.

Regardless of the personal biographies of the cast — with a Canadian Jew as a mastermind, a web-toed almost-priest, a black Juilliard student, an Albanian addict, and so on — the spirit of SNL in the early years was decidedly the voice of the outsider. A bit from the very first episode is the perfect example: “Show Us Your Guns,” a short film based on a similar campaign for Lark cigarettes, featured a few longhairs in the back of an open truck, imploring all-too-obliging Americans to brandish their weapons. SNL was an interloper, a street that wound its way from the outer boroughs of network television into the mainstream American experience. It was the Alexis de Tocqueville of comedy.

So what happened? Though GDP has grown, income inequality has as well, as shown below (using the Gini coefficient). So there should be more disenfranchised people to enjoy SNL, right? Like 99 percent of them.

Alas for SNL, that’s not the case. The graph above shows that as America grew financially comfortable (as measured by real GDP, in billions of chained 2009 dollars), the public’s taste for being poked soured. For a whole bunch of internal reasons starting around 1990, as described in Live From New York, the program’s sketches became more of a “performers’ program than a writers’ showcase.” Part of this had to do with the show’s increasingly successful forays into movies. Wayne’s World, based on an SNL sketch, became a fantastically profitable film (produced by Lorne Michaels) in 1992. The idea that characters might be able to helm their own movie franchises took hold, and, as Miller and Shales tell it, eventually considerations of long-term bankability trumped brilliant writerly conceits. The year after Wayne’s World was the moment when income inequality and SNL ratings went from being collinear for about five years to starkly divergent. This was, after all, the era when Adam Sandler, Rob Schneider, Farley, and David Spade (and, to a lesser extent, Chris Rock) flourished. But these men excelled in apolitical character-based sketches, exactly the sort of actors one could build multimillion-dollar film franchises around.

Just at the moment Saturday Night Live could have become more relevant as a gleeful subversive voice of the dispossessed, it retreated further away from the incisive political satire. Of course, the cast trots out a presidential imitator every election cycle, and some of them have been brilliant. Dana Carvey killed it as both Ross Perot and George H.W. Bush; Darrell Hammond made a stellar Bill Clinton; and Tina Fey’s Sarah Palin became a national talking point. But political-minded viewers no longer had to wait until Saturday night, and they probably shouldn’t ever have had to. As shows like The Daily Show took the lead in skewering politics and political analysis, SNL turned more to caricature, not criticism, and was eventually co-opted by the very targets of its satire. It became standard for pols to come on the show and exhibit their in-on-the-jokeness. Bring on the Mason jars, clad your kids in corduroy, name them Mason — SNL was becoming an ouroboros of gentle irony. It was becoming television’s version of Fort Greene.

Anyone who has been in a marriage for 40 years — or for five years, or three, or ever, or, for that matter, anyone who has ever been in a long-term relationship (successful or not) — knows that sustaining that initial incandescence is a fool’s errand. What are our lives but a managed retreat from those early magic moments and a futile attempt to hold on to them?

And so it is with television. The chaotic devil-may-care camaraderie of the early years was the engine for the monstrous show’s popularity. There were no rules, no inhibitions. It was like the early days of MMA, or a honeymoon.

When the show began, SNL didn’t have SNL to imitate, or its own myth hanging over it, creepily and darkly. More importantly, just being on the show was the goal itself. That was the whole game — those moments of living, breathing, writing Saturday Night Live. The 1 a.m. high, the all-night parties at the Blues Bar.

But just as in a marriage, the demands and lures of the outside world intercede. So it was with Saturday Night Live, which became a breeding ground for spinoffs and bankable stars. The show has nearly fully transformed from a vibrant community to a rutting ground for Michaels’s vast dynasty.

It makes one yearn for those incandescent moments no one ever saw. Like that time after the first season, in early July, when Michaels invited Dan Aykroyd and Belushi out to Joshua Tree, and Chevy Chase cooked, and everyone got wasted and everything seemed so perfect, precisely because it could never be repeated. As Michaels relates in Live From New York:

At about five o’clock in the morning, the sun was way too bright and woke us up. There was some sort of noise outside, so I staggered to the door. When I opened it, I saw Danny standing in the archway just a few feet away … we look out and there’s John, on the diving board, doing these cannonballs. He goes straight up, hits the board, comes down and then flips over into the pool. This was just for our benefit, Danny’s and mine, because there was nobody else awake or watching it.

Back then it was just SNL versus the world.

Joshua David Stein (@fakejoshstein) is a writer in New York. He once wrote an album about women he dated and Lewis Lapham.

Hype Going Up (on a Tuesday): ILoveMakonnen and the Power of the Drake Career Boost