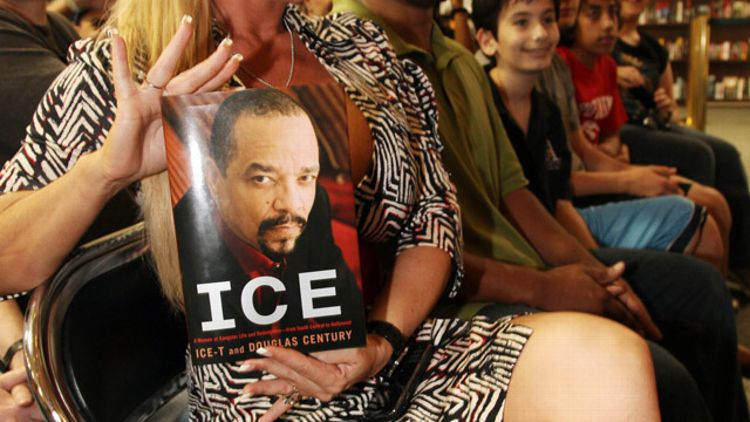 Welcome to Rock Memoir Book Club! This is where I read rock memoirs — because there are suddenly a lot of rock memoirs — and encourage readers to follow along. It’s perfect for people who like to read but are ambivalent about books written by actual writers. So, gather your rock memoir–loving pals and let’s talk it out! In this installment, I look at Ice-T’s 2011 memoir, Ice.

Discussion question no. 1: What is the defining incident of Ice-T’s life?

If you’ve been following along with the Rock Memoir Book Club, you’ve probably noticed that musicians typically are driven to write (or, more accurately, driven to hire a ghostwriter to write for them) by an inciting incident. This is an event that has long haunted this person, to the point where they must compose literature in order to explain themselves. For Pete Townshend, it was being charged with possession of kiddie porn in 2003. For Peter Criss, it was getting kicked out of Kiss. For Pantera’s Rex Brown, it was his strong dislike of ex-bandmate Vinnie Paul’s hairy, stripper-obsessed steez. For Ice-T, unsurprisingly, it’s the controversial song “Cop Killer,” from the 1992 debut of his punk-metal band, Body Count.

In Ice, Ice-T dispenses with a perfunctory explanation of why he wrote “Cop Killer” that anyone who’s already familiar with Ice-T has already heard a dozen times. (In short, police brutality plus Talking Heads’ “Psycho Killer” equals “Cop Killer.”) What bugs Ice-T to this day is that people give him crap about the supposed hypocrisy of being anti-authority back in the day and playing a police detective in 1991’s New Jack City and on Law & Order: SVU for the past 13 years.

After landing these gigs in New Jack City and Law & Order, of course, there’s always going to be dumb people out there saying, Ice, first you’re killing police, now you’re playing cops. What’s up with that? Man, shut the fuck up. You stuck on stupid? I’m acting, dude. I am not a cop. I’ve never arrested nobody. I’ve never read anybody their Miranda rights or slapped them in cuffs.

Got that? Ice-T’s persona is not meant to represent who he actually is. Except when it absolutely does, like in the video for “High Rollers.” Everything you see in this video is torn from Ice-T’s life circa 1988:

To me, coming from that hustler’s lifestyle, it was like: Why would you have a model? How fake is that? Why would you have girls in your video that you don’t even know? That’s fake, brother. Everybody in my videos was my friend. When we shot the ‘High Rollers’ video, I said, ‘The gats in the promo shots ain’t props.’ And they damn sure weren’t.

Follow-up question: Ice-T writes that he was playing Tecmo Bowl when he heard President Bush had publicly condemned “Cop Killer.” If you were Ice-T, which Tecmo Bowl team would you be?

Discussion question no. 2: Ice-T obviously isn’t a cop in real life. But is it fair to say that he is now part of the system?

Possibly. But I’ll warn you: Ice-T hates being called a cog in “the system” just as much as he hates the Law & Order/”Cop Killer” thing. “I got news for you, dog. The system is a monster,” he says. “Even if you’re a gangster, there is still a system.” To better illustrate this, Ice utilizes the rarely deployed and dubiously effective “Why Dwayne ‘The Rock’ Johnson starred in The Tooth Fairy” defense:

You’ll get these people saying, “Remember The Rock? He was a bad-ass in wrestling but he went soft. Now he does corny kids’ movies.” Well, check it, idiot — when The Rock was wrestling that was a character, too, same way he’s playing a superhero or a hockey player in The Tooth Fairy. But I try to remember what my mother was always saying back in Summit: People are stupid. Real talk.

Follow-up question: How does Pain and Gain explain Ice-T’s appearance in Leprechaun in the Hood?

Discussion question no. 3: If you could ask Ice-T anything, what would you ask?

A recurring phrase in Ice is “people always ask me,” or some slight variation thereof. Naturally, people have a lot of questions for T, and many of them concern the offensive “Cop Killer” and “system” inquiries described above. But “people always ask” Ice-T other things, too, such as, “How do you keep it hot? How do you keep things exciting in the bedroom?” Unfortunately, this is another oft-asked question that Ice declines to answer fully in Ice:

One thing about [my wife] Coco: She’s very much in touch with sexuality. I don’t understand why a lot of women see that as a fault; I see that sexiness as her power. The details of our relationship and how we’ve made it work — giving each other satisfaction, happiness, and peace for 10 years now — is enough to fill a whole other book.

Discussion question no. 4: Who is the bigger pimp: Ice-T or Law & Order creator Dick Wolf?

Ice-T predictably drops a lot of pimpin’ knowledge in Ice. (Example: “One down bitch is worth 10 funky hoes.” Conversion rates vary by country, but that’s more or less correct.) But he apparently takes a backseat to his current TV boss in the pimp sciences department. Dick Wolf knows how to treat his talent. Once, Wolf took Ice out to dinner in Monte Carlo. “I’m not going to front: I was excited to sit down with the boss,” Ice writes. “Dick Wolf is cool; he doesn’t whoop me.”

All of us who work in the entertainment business brag on who we work for. “I’m on NBC — Dick Wolf’s a legend in the game.” “Well, I’m on ABC — we’ve been number-one for years.” That’s like hoes bragging on their pimps. Yeah, I brag on Dick Wolf. Brag on his reputation. I don’t care who you are: Everybody wants to work for the flyer pimp.

Follow-up question: Does anyone who works for NBC really brag about working for NBC?

Discussion question no. 5: Is it possible to tell a boring anecdote about Flavor Flav?

One of the greatest achievements of Ice is that it manages to make Flavor Flav seem somewhat responsible (though not at all sane). Like, there was this one time when the guys were rolling to Red Lobster — Ice-T was in his Ferrari, and Flav and Terminator X were in a Mustang following him. Now, if you were driving your Ferrari in order to get some budget-priced seafood while Flavor Flav piloted a car directly behind you, what do you think would happen?

We all heard that brake light shatter. It got really quiet and then Terminator X said, “Oh shit, I think you just wrecked Ice’s ride.” … Flavor gets out of the rental car and for one minute he’s transformed back into William Drayton — he’s no longer crazy-ass Flavor Flav. He’s talking to me like an attorney, in his real voice. “Ice, I am really sorry for this mishap.” None of that “Yeaaaaaah, boyeeee!” shit.

Follow-up question: What would it take to get Flavor Flav a guest shot as a hotshot defense attorney on Law & Order: SVU, and why hasn’t this already happened?