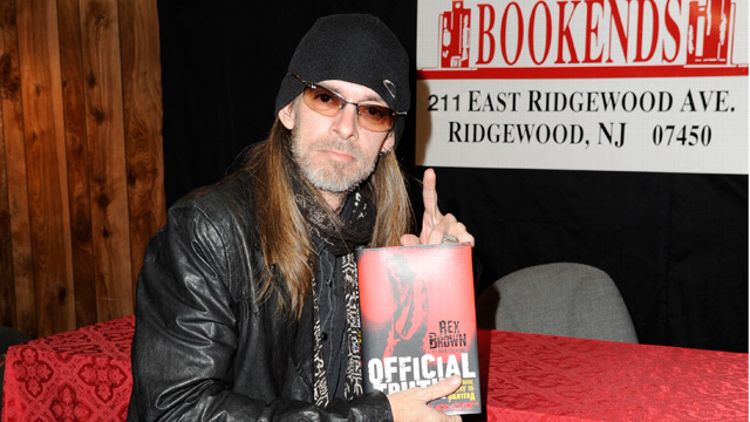 Welcome to Rock Memoir Book Club! This is where I read rock memoirs — because, post–Keith Richards’s Life, there are suddenly a lot of rock memoirs — and encourage readers to follow along. It’s perfect for people who like to read but are ambivalent about books written by actual writers. So, gather your rock memoir–loving pals and let’s talk it out!

Discussion question no. 1: How does Rex Brown have “inside” knowledge of Pantera? Did he know somebody in the band?

If you have the smallest bit of casual knowledge about Pantera, it probably involves the band’s wunderkind guitarist “Dimebag” Darrell Abbott, whose murder by a deranged gunman onstage during a 2004 concert by his post-Pantera band, Damageplan, in Columbus, Ohio, surely ranks among the most horrific rock deaths. If you own a Pantera album or two, you’re likely aware that Abbott’s brother, Vinnie Paul, was the band’s drummer, and a frankly terrifying slab of beef named Phil Anselmo was the lead singer. If you read Official Truth, 101 Proof, you’ll learn Pantera apparently also included a significantly less interesting bass player named Rex Brown.

Follow-up question: Even after reading Official Truth, 101 Proof, this Rex person is a little foggy in our heads. What’s his connection to the band again?

Discussion question no. 2: What’s the most annoying thing about Vinnie Paul?

A rock star is typically motivated to write a memoir for one of two reasons: (1) His life and career are in a great place, and he wants to reflect warmly on his experiences; (2) His life and career are not in a great place, and he has an ax to grind. Brown and Official Truth, 101 Proof fall into the latter category. The target of Brown’s ire is Vinnie Paul, who’s been estranged from Brown and Anselmo in the wake of his brother’s death. (Anselmo made disparaging comments about Dimebag before his murder, which might have motivated the person who killed him to lash out; Brown was aligned with Anselmo in the band Down until Brown quit in 2011.)

Official Truth, 101 Proof ends on a conciliatory note: “I do feel empathy for him on a human level,” Brown says of Paul, adding a vague wish for some kind of “kiss and make up” scenario. In order for that to happen, however, Vinnie Paul can never read this book. From the very first line, “Dime, I can’t handle your fucking brother,” Official Truth, 101 Proof catalogs the myriad ways that Vinnie Paul is (in Brown’s words) “just a strange person” and “one hairy dude” who “maybe only got laid one out of ten times and that’s if he was lucky.” Paul’s sins include demanding a grandiose introduction upon entering a “titty bar” (“Hey, everyone, it’s Vinnie Paaauuuul from Pantera!”); failing to ingest the proper amount of Ecstasy in one sitting (“Vinnie took the whole pills and the results weren’t pretty”); and a subpar sense of humor (“When he made [a joke] it was usually the dumbest fucking joke you’ve ever heard in your life”).

Follow-up question: Is there such a thing as a “dignified” strip-club entrance?

Discussion question no. 3: Is it really possible that Eddie Van Halen could’ve behaved so poorly at Dimebag Darrell’s funeral? (I have never read Sammy Hagar’s Red.)

You haven’t read the Hagar book? You need to end this book club meeting and purchase a copy of Red stat. You won’t find a better instance of reportage/character assassination concerning EVH’s vampiric “wilderness” years in the ’00s. Official Truth, 101 Proof is a mere hors d’oeuvre, containing a short vignette from Abbott’s funeral where Eddie exhibits an “Eruption” of inappropriate, drugged-out behavior:

There were a huge number of Dime’s musician friends there, and Eddie Van Halen and Zakk Wylde were asked to give speeches. I was sitting in the second row behind Eddie, who was just totally out of line, really disrespectful actually. I told Eddie on numerous occasions to shut the fuck up but there was no point. Zakk was always one of Dime’s best friends, as well as being, like Dime, a great guitar player, but on this occasion he was in the bizarre situation of having to keep Eddie Van Halen — who was coked out of his head and acting like a complete idiot — in line.

“Fuckin’ shut up,” Zakk told Eddie after he had rambled on for a while while he was giving his eulogy — something about his ex-wife if I remember it right — but that didn’t stop him, he just kept going. It was really disrespectful.

Follow-up question: How much worse would it have been had David Lee Roth been invited instead?

Discussion question no. 4: Who was the lamer Pantera tourmate: Metallica or Megadeth?

Brown credits Metallica’s mid-’80s output with steering Pantera away from its glam-rock roots and toward the more aggressive and monstrous pummeling of its reputation-making records, 1990’s Cowboys From Hell and 1992’s Vulgar Display of Power. But when Pantera opened up for Metallica in 1996, the tables had turned — now Metallica was (relatively) glammed up, and Pantera were the edgy badasses:

As far as our buddies in Metallica were concerned, well we hardly ever saw them at this point. On the rare occasions when we did, Lars would turn up backstage with fucking dudes like John McEnroe. It was crazy shit.

As for Megadeth, who invited Pantera to open on the Countdown to Extinction tour, it was even worse than having to deal with fucking dudes like John McEnroe:

The only emotion I can attach to the experience is that they were bland to hang out with … We were in the heyday of getting fucking wasted every night, whereas they were on their whole sobriety kick, so the two don’t exactly fit together. Dave Mustaine would sneak in bottles of Scope mouthwash or shit like that to drink, which seemed dumb to me at the time. I felt like saying, “Just go down to the liquor store, dude, and get yourself a fucking bottle of something. Fuck it, don’t be drinking Scope!”

Follow-up question: Would Metallica have kicked Dave Mustaine out of the band in the early ’80s had he only been abusing Scope?

Discussion question no. 5: Would you rather see Ozzy Osbourne’s testicles or spy David Allan Coe’s penis?

Perhaps because Brown was married during much of his tenure in Pantera and Down, there’s little in the way of sexual escapades in Official Truth, 101 Proof. However, the book has plenty of full-frontal nudity, courtesy of two of the most pungent and lightly regulated mid-sections in rock and country. The first instance occurs at Ozzfest, when Ozzy pulls up in a golf cart wearing an ill-fitting robe and offers our hero a drink:

Yeah, well, as much as I admired him and as happy as I was to have a drink with him, I draw the line at staring at his or anyone else’s balls, so eventually I said to him, “Dude, can you please put your fuckin’ balls away. I don’t want to stare at your gum all night.” He ignored me. “Godfather of Metal, would you mind covering up the huevos?” I asked again. “Aww fuck you mate.” Ozzy didn’t give a shit.

Later in the book, Dime invites Brown to hang out with him and Coe:

I went over to where they were and he’s got his shirt off and stinks like nothing I’ve ever smelled before. I felt like saying, “Dude, take a shower. Deodorant, anything.” He’s also covered head to toe in ink, so I stupidly said, “I like that ink man, looks really cool” and no sooner had I said that, he dropped his trousers to reveal the word Danger tattooed on his cock, vertically I think, although I didn’t look for long … I’m all for ink, got a lot of it myself, but who the fuck tattoos their dick?

Follow-up question: Shouldn’t a “Danger” tattoo on David Allan Coe’s penis be considered a public service, akin to a fire exit in a movie theater or a Surgeon General’s warning label on a pack of cigarettes?

Coming up: Ice-T’s Ice: A Memoir of Gangster Life and Redemption — from South Central to Hollywood.

Grantland Reality Fantasy League: Manties, Cannibal Sex, and One of the Greatest Tribal Councils in History