Ricky Gervais to Host the Golden Globes, Then Talk About It For a Whole Year Again 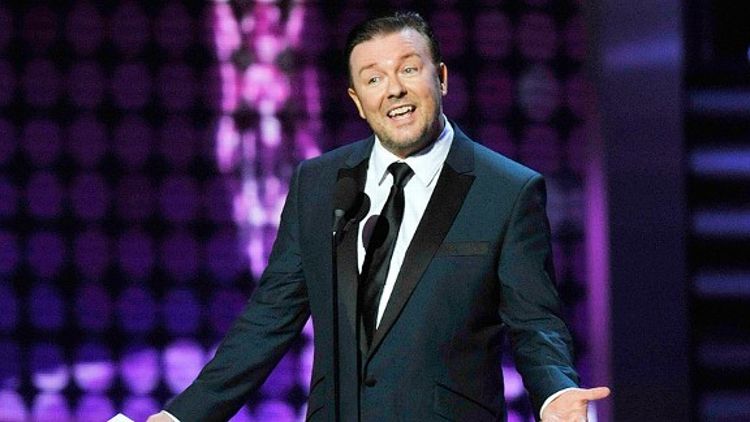 Yesterday afternoon the Hollywood Foreign Press Association confirmed that Ricky Gervais will return to host the Golden Globes for the third time. Considering how hilariously mean Gervais was the first two times, this sounds great, right? Well, no, not really.

First, allow me to say that I’ll love Ricky Gervais forever on the strength of the original Office alone. But here’s the thing: Most of the goodwill Gervais scored by roasting celebrities at the Golden Globes has been gradually, persistently squandered by his whole exhaustively talking about the Golden Globes for a whole year. It started just about as soon as the ceremony ended, when the miffed reaction from a predictably thin-skinned Hollywood crowd was being treated as an actual controversy. At that point, all of that attention was out of Ricky’s hands, and he did have to offer up some kind of defense. He ended up releasing a calm statement, saying “Everyone took it well and the atmosphere backstage and at the after show was great.” Soon, though, his reactions got a bit more self-congratulatory. In an interview with Piers Morgan, he came off as smug and self-satisfied as he spat out things like, “It’s not my job to worry about what people think of me, that’s the job of a politician.” Piers, of course, stroked his ego, comparing Ricky at the Globes to “inviting a hammerhead shark to dinner,” whatever that means. (Are you having this dinner underwater? Because if you were to invite the shark to a regular dinner, he would die on dry land, Piers).

Other talk-show hosts followed suit, and Gervais has bounced around late-night couches doing his “rebel hero” shtick. He told Jon Stewart that he had “fuck all” to apologize for. He told Conan that if it wasn’t for the censors, he would have done a Globes bit dressed like Adolf Hitler. In the Wall Street Journal, he wrote: “I host the Golden Globes like some businessmen play golf. For pleasure.”

He also brought about the Golden Globes up when no one was asking about them. On his new BBC show Life Is Short, he used it for a not-terribly-amusing bit where Johnny Depp shows up at his office, ashing his cigarillos in his water cup because he’s still pissed Gervais made jokes about The Tourist. Earlier this year he got a lot of attention for floating the idea, via his blog, of a “live 3-hour podcast during The Golden Globes. Me and a few chums (like Louis CK, Chris Rock, Karl Pilkington, John Stewart, Larry David popping in and out) doing our own alternative commentary. The biggest live webcast ever? Who knows? Who cares? What’s fun is the shit we might come out with. No money. No sponsor. No guide lines … No one could do a fucking thing.” He also tweets stuff like, “Can’t believe all shouts for me to host Oscars. Really appreciate it but I don’t think it’s my kinda gig. Although that’s the fun sometimes.” It’s strange but it feels like, more than the money and the fame and the adulation, his ability to piss off celebrities is the one thing that’s really gone to his head.

But is he really so hated? How angry can the Hollywood Foreign Press Association be if they hired him for a third time? Back in the WSJ piece, he wrote “I think I may have burned my bridges with the Hollywood Foreign Press. I think it was something I said. Maybe it was the talk of bribery and corruption? … Maybe it was the fact that I introduced their president by saying that I’d “just helped him off the toilet and popped his teeth in”?’ But the HFPA themselves are now trumping up the return of the controversial! say-anything! Ricky Gervais! In an accompanying statement, they wrote, “While many welcome Gervais’s return, not everyone is happy with the decision because last year his blunt one-liners targeting big-name celebrities caused anger and resentment in some quarters.” It’s a marketing tool.

How will all this affect his actual performance at this year’s Golden Globes? About it, he writes on his blog: “The outrage I caused was of course, as usual, totally out of proportion to the things I said. I don’t think anyone had any right to be offended but they were. This year I’m going to make sure their offense is completely justified.” He also tweeted “Just told Billy Crystal he’d better not use any of my holocaust or pedophile material at The Oscars.” Ugh. Gervais, at his best, is subtle and sharp. But after a full year of breathless coverage, trumped-up beef, and shit-talking, he’s worked himself into a corner: At this year’s Golden Globes, he has to go huge. Drag.