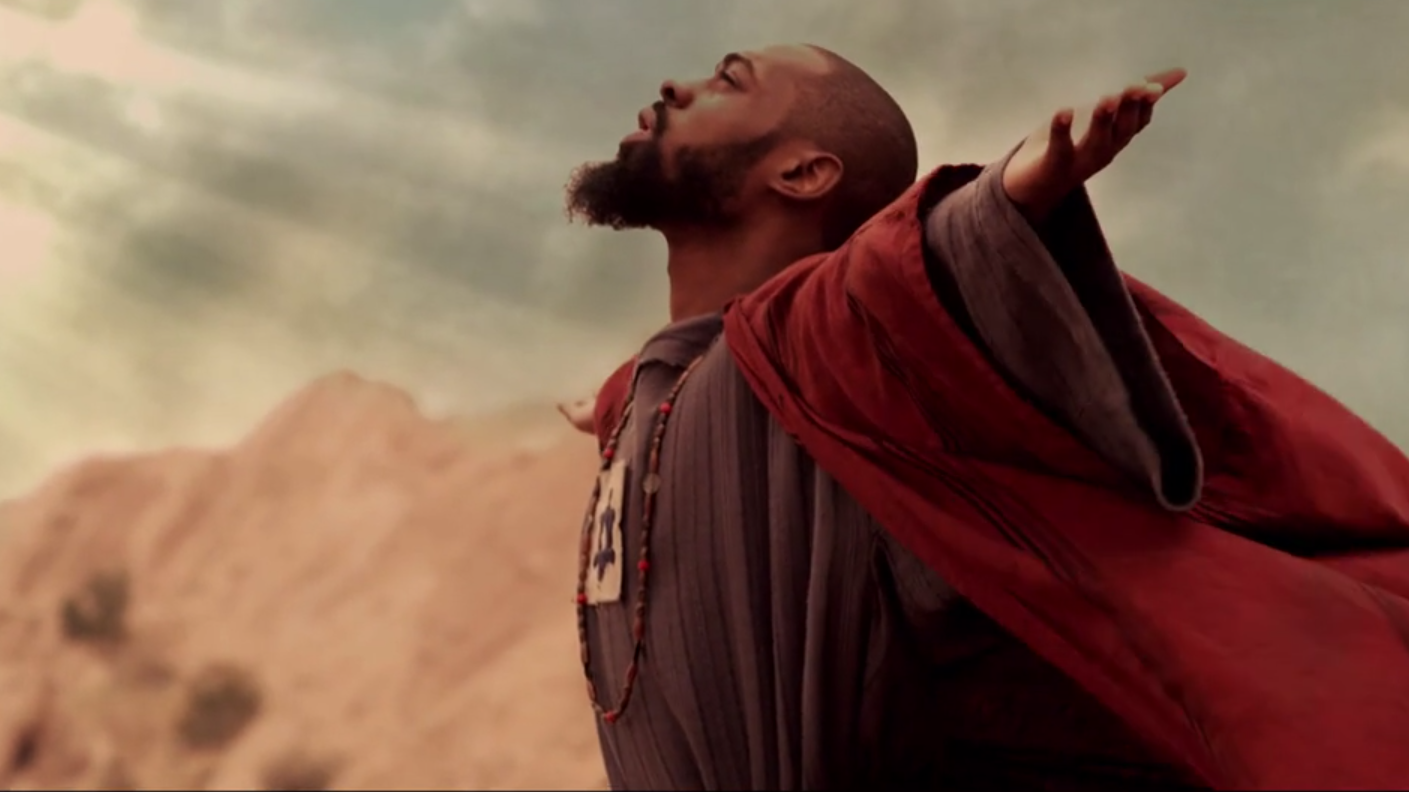 In 2014, out of nowhere, I decided to track the rise of Christian films in the mainstream. It was certainly a landmark year for the genre, with a number of these films holding their own at the box office against more typical and bigger-budgeted secular moviegoing experiences. But thinking of it as a moment in time also meant I felt this trend would come and go. There was no way this could possibly be a sustained thing that lasted into another calendar year.

This afternoon, Shadow and Act posted a trailer of a film titled Revival! The Experience.

The film is billed as “The Gospel of John … As You’ve Never Seen It Before.” And based on the trailer, that’s for two reasons. (1) Everyone is black, which finally gives some merit to all the illustrated Bibles I had as a child that were sans white people. And (2), as the message in the clouds alluded to, it’s a musical.

The synopsis, from IMDb:

REVIVAL is hybrid of every film idiom: Broadway musical, Hollywood musical, animation, green screen technology, and sound stage. In its meta-theatrical stylized bridging of the theater and the audience’s everyday experiences, REVIVAL is a mixed media virtual experience of the gospel according to John the Apostle. The presentation of this timeless story is told by dramatizing supremely constructed gospel music that helps recount the mission, ministry and miracles of Jesus. REVIVAL is a concert film. Nothing close since JESUS CHRIST SUPERSTAR. …and served up with a splash of THE WIZ. It is a gospel/funk fantasia that speaks to all throughout the world; either as a film or as a live-action musical. Every element is designed to deliver a clear, comprehensive, and compelling entertainment experience-from the vibrant wardrobe to the irresistible music; from the craft of acting and the gift of song and dance. An amazing an uniquely modern and authentic approach to the Christian narrative.

Basically, it sounds like Empire, were it the lost Third Corinthians.

When the trailer begins, you see black people. And then you see a black man who clearly is Jesus. And you’re like, “A black Jesus, finally. You officially have my attention, future major motion picture musical.”

But who is this “Mali Music”? Chances are you’ve never heard of him, but that’s on you, not Mali Music. In two weeks, he’s up for a Grammy, unfortunately landing in heaven and Earth’s worst category, Urban Contemporary.

Black Jesus is going against Beyoncé and Chris Brown. He’s legit. And this is exciting. But then something happens and you immediately forget about him. And where you are. And who you are.

Nothing was the same, because CHAKA KHAN IS IN A FILM WITH JESUS. And your first question is, “Is Chaka playing someone from the Bible, or is CHAKA JUST PLAYING CHAKA?” It’s unclear, until IMDb tells you Chaka is playing Herodias, a woman of the Herodian Dynasty and singer of the 1983 hit “Ain’t Nobody.”

But then the trailer keeps going. And more things unfold. More great, confusing, mysterious, beautiful things. Like seeing the principal from The Steve Harvey Show. 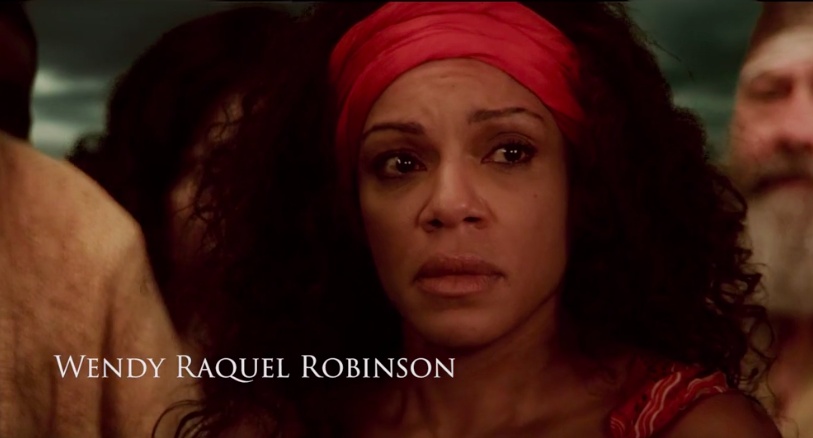 After seeing this, you’re all, “Damn, they’re really going there with this cast.” But what you don’t realize is that they haven’t even begun going there. That doesn’t happen until the next person graces the screen, Ms. “AFTER ALL OF THE DARKNESS AND SADNESS, SOON COMES HAPPINESS. IF I SURROUND MYSELF WITH POSITIVE THINGS, I’LL GAIN PROSPERITY” herself:

And just like that, you’ve forgotten that Jesus is black, and that this is a film about Jesus, and that this is even a film. Because the one-two-three punch of Rufus Featuring, Principal Regina Greer, and “OH HE LOOKIN’ GOOD AND HE TALKIN’ RIGHT, HE THE TYPE THAT MIGHT CHANGE MY LIFE, EVERY TIME HE LOOK AT ME MY GIRLS BE LIKE, THAT ONE MIGHT BE THE ONE TONIGHT” will do that to you.

Also in this film: codirector Obba Babatundé (Miss Evers’ Boys, Introducing Dorothy Dandridge); T’Keyah Crystal Keymáh (In Living Color, Cosby); Dawnn Lewis (A Different World); Siedah Garrett (sang a duet with Michael Jackson on “I Just Can’t Stop Loving You”); and this terrifying Alfalfa standing in front of what I think is the Empire State Building who I just discovered is playing Lucifer: 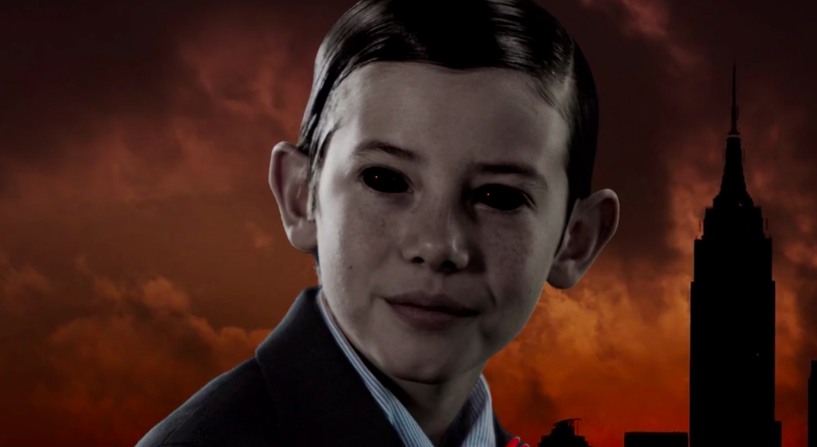 And to round it out, Pontius Pilate, played by the always great actor Harry Lennix (who has screenwriting and producing credits in the film). 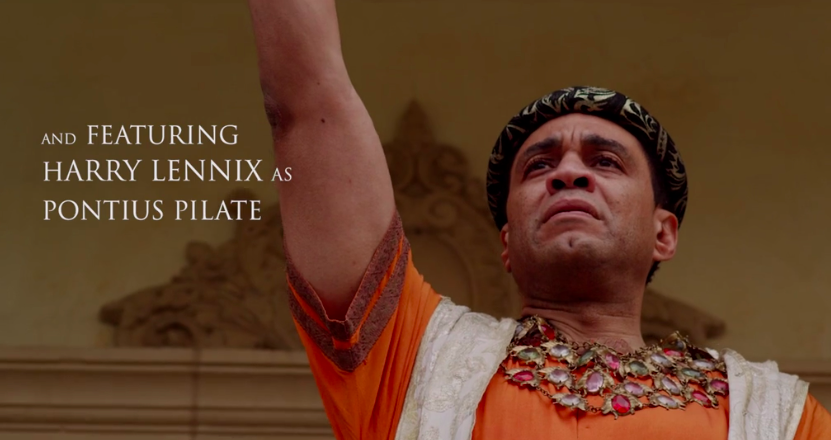 The release date says 2015, but who really knows. The only thing that’s certain is that Black Jesus, Chaka, and a Child of Destiny are all in one film. And, depending on who you are, this is either the news of the year or the first concrete sign of the apocalypse. Either way, it looks like Black History Month came a few days early this year.

Tyrese, Green Lantern, and a Brief History of Thirsty Actors