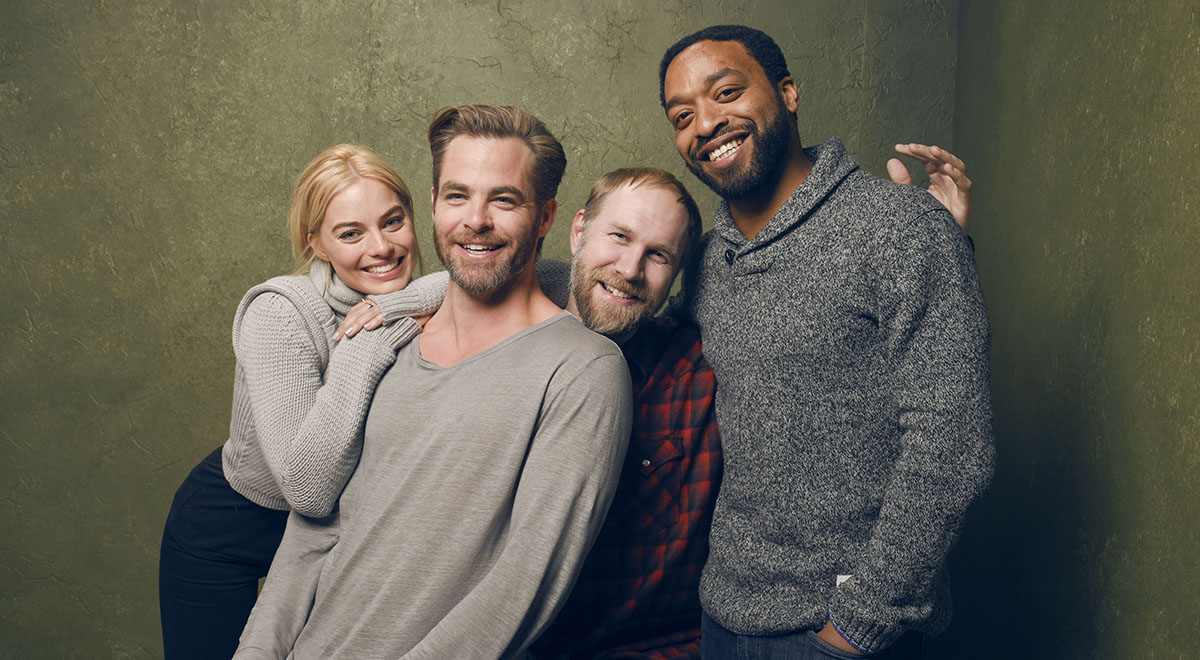 The Sundance award for longest sustained grin during absolute media chaos goes to director Craig Zobel. When we meet in a makeshift chalet tucked deep inside Park City, Utah’s ski bum metropolis, the room is pure cacophony. Camera crews assemble around Kevin Bacon like a mortar squad, glamorous red carpet reporters swarm Cobie Smulders, looking just as glamorous, and Keanu Reeves slouches over in a half-nap pose, nearly re-creating “Sad Keanu” as he waits for the next wave of interviews. Zobel stands out from the mayhem in the best way possible; he’s scruffy, he’s wearing flannel, he’s thrilled to talk about his new film, Z for Zachariah, and he still has a smile on his face. Joy is hard to come by this far into the marathon-like festival. Zobel’s is a small miracle.

Zobel tries to resist unraveling Z for Zachariah, an adaptation of Robert C. O’Brien’s 1974 sci-fi novel. But he can’t help it — the film’s subtextual simmer excites him too much. Starring Margot Robbie (The Wolf of Wall Street), Chiwetel Ejiofor, and Chris Pine, the film focuses on three strangers whose lives become entangled as they spring back from a poisonous apocalypse. As they harvest crops, scavenge for supplies, and construct a Swiss Family Robinson–style waterwheel generator, emotion takes over. There’s lust, love, and eventually loss. It’s everything Zobel wants to see from a movie he didn’t direct. He can’t help but gush about it.

“I need to be a lot artier,” Zobel jokes. He recalls reading an interview in which Holy Motors filmmaker Leos Carax chain-smoked cigarettes and explained that “movies are best experienced in the dark” and that it was too bright to answer questions. “That’s sort of the best,” Zobel says. “I need to start dressing more comically or something. I need a crutch. Maybe I need weirder hair?”

Pretension wouldn’t serve Zobel. The guy loves making movies (something you rarely hear out of a director’s mouth). Turns out, exploring human nature can be serious and fun. It’s a balance that defines Zobel’s work. His debut, Great World of Sound, leans into improvised comedy to paint a scathing portrait of the music industry. 2012’s Compliance recounts the true story of sexual assault by way of a prank call, the ultimate Milgram experiment conducted in public. Z for Zachariah turns a YA love triangle into another psychological exercise. Zobel’s films are composed and piercing, always willing to enter uncomfortable territory. His stories dodge calculation through commitment. He lets the snowball carry him, an approach found in one of his earliest projects: Homestar Runner.

Yes, the recently revived Flash cartoon comes from the man who just directed the lead of last year’s Best Picture winner. During a day off with cocreators Mike and Matt Chapman, two friends he regards as brothers, Zobel swung by a local bookstore and stumbled into the kid’s section. A lightbulb went off. Why didn’t these three creative guys looking for work write a children’s book?

“We were like, ‘We could write one of these in an afternoon! Let’s go write one!’” Zobel says. They lifted a joke nickname for Atlanta Braves player Mark Lemke, and the bubbly, athletic-ish Homestar Runner became the subject of The Homestar Runner Enters the Strongest Man in the World Contest, self-published with Kinko’s magic and distributed to friends. He also became the trio’s personal mascot. Zobel recalls receiving a Homestar Runner cake on his 21st birthday, a confirmation that their creation had grown into something weird, wonderful, and lasting. In return, he and Matt wrote Mike a Homestar Runner theme song as a Christmas present. The series’ first proto-episode began as a cartoon accompaniment animated with Super Nintendo’s Mario Paint. When Mike decided to toy around with a newfangled program known as Flash, he had an obvious subject. 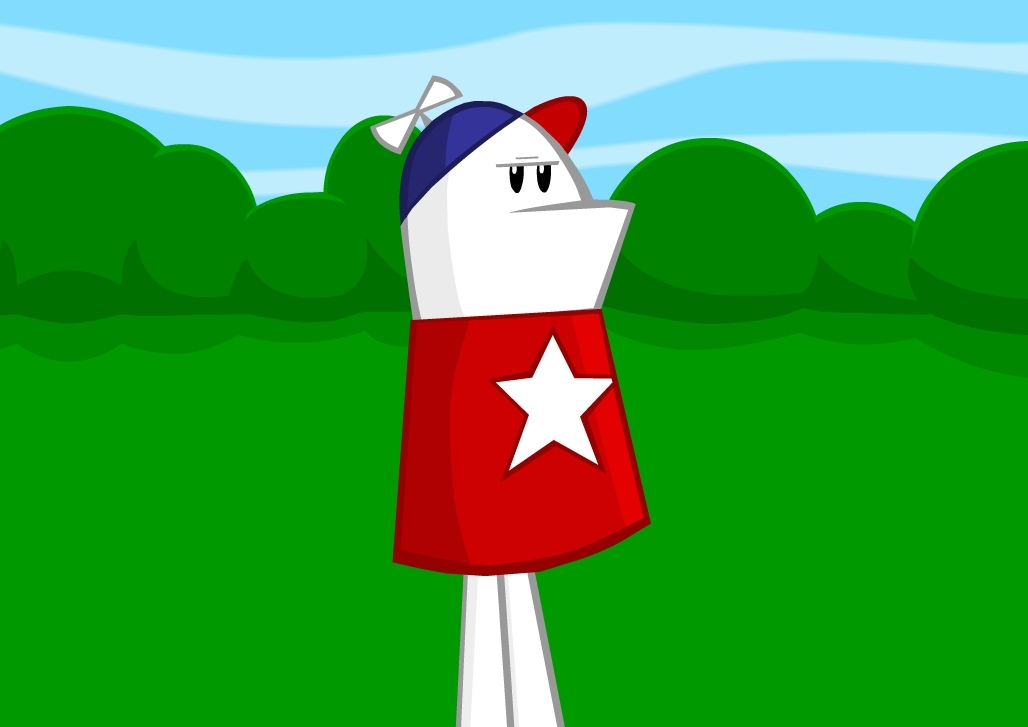 “And they just started going,” Zobel says. “So I’ve been around, and I was around in the early days a lot more.” Zobel is credited with creating Strong Sad and Pom Pom, finding room for melancholy characters by running with the joke. He co-wrote episodes, contributing to “Where’s the Cheat?” and “Homestarloween Party.” But Homestar Runner was always Matt and Mark’s baby. “At some point I was like, ‘I’m gonna go make live-action things.’”

Zobel attended North Carolina School of the Arts with David Gordon Green; Green’s longtime director of photography, Tim Orr; Danny McBride; Paul Schneider; and Observe and Report director Jody Hill. He imagines the group of friends like a band, each person adding a particular sound. Zobel slipped into a producer role for Green, acting as a pragmatic voice on films like George Washington, All the Real Girls, and Undertow, a film that saw him working with the legendary Terrence Malick. Being a production manager requires creative awareness and levelheaded business thinking — the goal is to get the job done. It’s a mind-set Zobel never really shook when he deviated from Team DGG to direct his own films.

“Working ‘in production,’ as they call it in movies — as a UPM, a first assistant director, a second assistant director — those jobs are very much about organizing how to capture it all,” Zobel says. “How to make sure that you don’t have to go back and do it again.”

Zobel laughs at my attempt to draw a line between Homestar Runner to Z for Zachariah (His own reach: “There’s a character named Coach Z in Homestar Runner …”). But the director’s days below the line provided a sturdy bridge. Economy is Zobel’s stamp, from Homestar’s simplistic gags to more elaborate dramas wound tightly around single ideas. Compliance is Zobel working at maximum Zobelness, the ripped-from-the-headlines mind games filmed with austere focus, more like re-creation than dramatization. When the film played Sundance in 2012, there was an outcry questioning Zobel’s motives. Compliance was exploitative and perverse, screamed enraged audiences during Q&As. The movie did its job, cracking open a heinous act and boiling it for 90 minutes. Each chilling camera movement inside the film’s main location, a claustrophobic fast food joint, dug deeper and deeper into the psychology. There’s terror in Zobel’s efficiency.

In Z for Zachariah, Zobel’s director-producer instincts reveal themselves with an absence of fat. Everything counts — every stunning landscape (Zobel shot the film in desolate pockets of New Zealand), every prop, every character glance, every uttered word. The key was giving himself choices before and during the shoot.

“That’s the UPM brain. Try a lot of choices so that we can have choices in the edit room,” he says. The first decision: Scrap most of the book’s plot. A formative text for men and women of a certain age, O’Brien’s Z for Zachariah is heavy on the sci-fi and YA tropes. Only reading the book after signing on to the film, Zobel saw tinkering as a necessary evil to make Z for Zachariah a movie about people surviving the aftermath of the apocalypse, not the apocalypse itself. “My elevator pitch of it would be like, ‘What if you [retold] Adam and Eve but you didn’t know at the end of the story which was Adam and which was the snake?’” A straight adaptation would have resembled something a little more Hollywood. “You would sleep through the end of it, you know what I mean? Like, maybe you do, still, with this movie, too, but at least we have a little bit more of a chance!”

Zobel sees Z for Zachariah joining a long history of end-of-the-world love stories, like The World, the Flesh and the Devil or The Quiet Earth. The film shines like a blockbuster and talks like Roman Polanski’s Knife in the Water. Robbie, Ejiofor, and Pine’s characters each have hidden agendas and unspoken feelings, imbuing each cut with the Kuleshov Effect. Z for Zachariah runs 95 minutes and chronicles a lifetime. The idea of luxuriating in subtext makes Zobel giggle, like he got away with it.

“Of anybody, Margot was able to really say it the most succinctly and best: ‘It’s about communication between people, and how complicated that can get.’ With two people it’s complicated, but you solve it — you have to. When there’s three people …”

There have been opportunities to leap from independent films to a studio picture.1 It’s not that Zobel is too arty to take Hollywood up on its offer — his hair isn’t that weird, after all — but that development hell doesn’t look all that appealing. He wants to work, UPM his career in order to reach maximum productivity. And if he can get movies like Z for Zachariah made, the bigger budgets can wait. Before Sundance kicked off, Lionsgate and Roadside Attractions picked up Zobel’s latest for distribution. As he puts it, someone thinks Z for Zachariah smells enough like a mainstream movie to put in theaters. Fine by him. “I just want to make movies as fast as I can make them.”