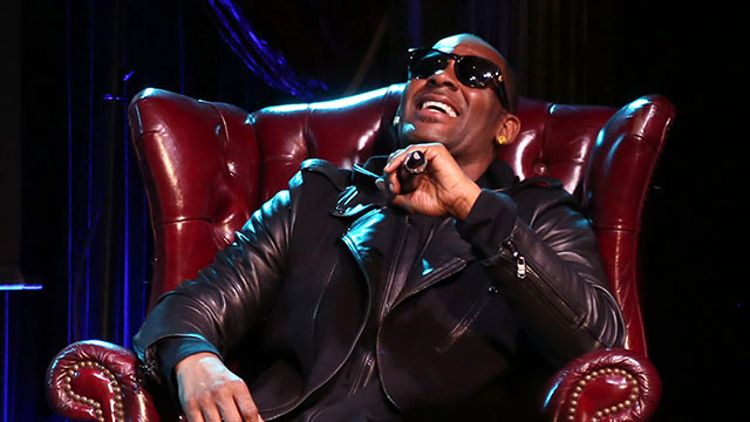 These are some pieces I’ve written for Grantland about R. Kelly:

These aren’t nearly all the times I’ve penned thoughts about him. He’s made cameos in other pieces, including a Trapped in the Closet screening in New York, complete with an R. Kelly Q&A, and a Chappelle’s Show bracket in which a Kelly-themed sketch titled “Piss on You” advanced to the Sweet 16.

There are also tweets. Many, many tweets. A few:

From R. Kelly press release: "he is known for delivering music that is spiritual, inspirational and extremely sexual." #HolyTrinity

I need more proof that's Hulk in that video. Who doesn't have that hair, voice, & a son named Nick? Also: it wasn't R. Kelly. It was Avant.

One is a joyous relay of a press release about R. Kelly, another makes a comparison between the 2012 Hulk Hogan sex tape and R. Kelly’s underage-sex charge, and a third hyperbolically suggests R. Kelly is a pillar of black history.

There’s been more, but the quantity ultimately isn’t what matters. It’s purely that it exists.

Yesterday, The Village Voice ran a conversation between music critic Jessica Hopper and Chicago Sun-Times reporter Jim DeRogatis, the man who, 15 years ago, blew the lid off the story of R. Kelly’s history of predatory behavior toward teenage girls. A phrase used in the piece, “stomach-churning,” is an appropriate way to describe the account, because the graphic nature of the tales — the things R. Kelly is accused of doing to young girls as well as the trauma his accusers say they’ve experienced — is physically unsettling.

Perhaps, if this piece is your first foray into R. Kelly as a human or a musician, the extent of the stomach churn ends with the article. But as a fan, a public supporter, and an omissive apologist, that feeling only intensifies after finishing the piece.

Despite a layer of guilt, I didn’t have a strong desire to touch the issue, because I still hadn’t fully parsed how I felt. Only days prior, I’d been in a room for another R. Kelly Q&A, this time as he promoted his newest album, Black Panties. I went in with every intention of writing about it the next day. I figured Kelly would play his tried-and-tested role, offer a few outlandish quotes, and that would give me enough to turn into a post for the Internet to laugh at.

The post never happened. There isn’t one specific reason why, but there was a moment during his talk that caught me so off guard that I was jolted back to reality in the middle of a night of laughter. Kelly was asked who he thought were his peers. I was genuinely excited about what he would say, not sheerly for shock factor’s sake, but because he’s an artist who’s had such a unique, prolific recording career, and I was curious about who he felt met his standard of excellence.

I remember cringing, and not just because Brown’s first album came out when Kelly was seven solo albums in. He went with a man who is less his peer and more his protégé in the increasingly accepted “it’s about the music, not the man” philosophy of pop. He went with the man who beat his girlfriend, Rihanna, in the face, and seems to have lived a life of no remorse in the years since.

The answer felt like a glimpse into a fraternal bond the two share. Perhaps they sit around, talking about how people won’t let the past go — how people need to relax and let the allegations and proven crimes go — in the same flippant tone as Kelly’s response to the Village Voice piece while talking to Atlanta’s V-103 radio station.

“Well, I feel like I got the football, man, I’m running toward the touchdown and stopping and looking back, mess around, I’ll get tackled.”

When he first said Chris Brown, I didn’t immediately change the way I thought about him, but for the first time in my career of covering R. Kelly (which, relative to some, has not been that long), I had to acknowledge that maybe I was doing something wrong. He said Chris Brown and my stomach churned, but it wasn’t my “I’m done with R. Kelly” moment at all. I’m pretty sure I continued to laugh and joke and Instagram and tweet and text my experience at the Q&A. But in the back of my mind, I began to think that maybe — just maybe — he wasn’t a guy I wanted to spend my time writing about. And promoting. And joking about. Perhaps this should have clicked years ago, before I was a writer and when I was still a teenager treating “Half on a Baby” like a hymn, but the time had finally arrived. I started to wonder if I was the company I kept. Perhaps my public endorsement of him was beginning to look like a reflection of my values.

And then, less than a week later, the piece in The Village Voice appeared.

Years of knowing what he was accused of somehow didn’t cross the line. But, finally, I got there. What crossing the line meant, and what I was supposed to do next, still wasn’t clear.

The Internet and its various vehicles of expression are a great place to point fingers and deflect blame — to become outraged, either authentically or purely for show. Many of the reactions I witnessed to the Village Voice piece were emotional and directed at R. Kelly. Statements such as “I’m done with him,” and “never listening to his music again” were commonplace, almost as if news of his pedophilia accusations had just been released on Monday.

It’s hard not to dismiss comments like these as simply “things we were mad about on the Internet that day,” but there is something important, bordering on therapeutic, about expressing these thoughts publicly, almost as a process of washing away our own sins. But the sin feels bigger than R. Kelly, and he’s not the first. He’s part of a nasty lineage of stars who, because of their musical prowess, charm, regional affiliation, public relations wizardry, or well-timed periods out of the spotlight, have been able to avoid permanent ostracism.

The bigger issue: the sin of the free pass. And how he got one. Because not all of them do.

The things he’s accused of are despicable, and to some degree the knowledge has been public for years. But his voice is perfect and he’s one of the most consistent, heralded singers of the past 20 years. How did the latter fact win out — timeless voice over multiple rape accusations — perhaps until this moment?

There’s no simple answer, but after spending days thinking about it, I can offer my own belief, as I look into my personal R. Kelly–apologizing subconscious.

I’ve celebrated his music for having multiple personalities, never fully realizing how advantageous that could be for R. Kelly. I talked about that in the piece I wrote on his Newtown shooting song:

“There’s Club Kelz [‘Fiesta (Remix),’ ‘Ignition (Remix)’], Chicago Steppin’ Kelz (‘Step in the Name of Love,’ ‘Happy People’), Trapped Kelz (‘Trapped’), Infidelity Kelz (‘Down Low (Nobody Has to Know),’ ‘When a Woman’s Fed Up’), Nasty Kelz (‘Feelin’ on Yo Booty,’ ‘Bump n’ Grind’), and, of course, Stupid Nasty But Still Sweet? Kelz (‘The Zoo). Perhaps his greatest iteration, however, which is also the starkest contrast to his other personas, is UPLIFTING KELZ.”

If he were just one R. Kelly for his entire career, it would be hard to ignore the charges from his personal life. The story of R. Kelly would be twofold, like his self-appointed peer, Chris Brown: the man vs. his music. Which is why, for me, it is easy to immediately turn off the Chris Brown switch, decry every single thing he says, change the station when his music comes on the radio, and take every public mention of him as an opportunity to attempt to make him go away.

These are excuses. But they’re honest excuses.

Similar excuses were made when singing along to a Dave Chappelle sketch about R. Kelly urinating in a young black girl’s mouth. I’ve laughed countless times at that sketch, along with another bit about the same incident, centering on the idea of “How Old Is 15?” I practically know both skits by heart. And frankly, I have no intention of taking back those laughs, because they felt good, and I can’t even if I want to. But considering them now, something feels different. It’s similar to how, when I was 13, The Marshall Mathers LP transported me to an angst-ridden, violent, rape-filled oasis, but when I listen to it now I can barely get through consecutive songs.

Still, I know all the words. And always will. And while there’s some embarrassment in being able to rattle off “Put your hands down bitch, I ain’t gon’ shoot you / I’ma pull you to this bullet and put it through you / Shut up slut, you’re causing too much chaos / Just bend over and take it like a slut, okay Ma / ‘Oh, now he’s raping his own mother, abusing a whore / Snorting coke, and we gave him the Rolling Stone cover?'” I know the importance of being stuck with that knowledge, and how it informs my desire to never go back to a place where I sought that out as enjoyment.

The excuses for Eminem are ultimately based in art. But with Kelly, we’re talking about real life.

I am ashamed that it took R. Kelly’s alleged transgressions ultimately being about me to finally make me take a step back. That it took a brazen alliance with Chris Brown to wake me up. That it took a high school friend who I haven’t spoken with in seven years sending me a Facebook message, saying she was curious how I felt considering my very public adoration of “his music and all-around ridiculousness” to get me to write this. To write this about a man who, not six months ago, I drove 25 hours to see in concert. And I’ve made light of the accusations against him, using the word “allegedly” as a tug on the collar, an “O.J. didn’t do it” sweeping under the rug.

The past isn’t just something that R. Kelly tries to distance himself from. We, as listeners, fans, and supporters, do it too. That means me, and perhaps you as well. And at this very moment, we all want to pretend certain things never happened.

The difference is, we can move forward. But we can’t let R. Kelly come with us.