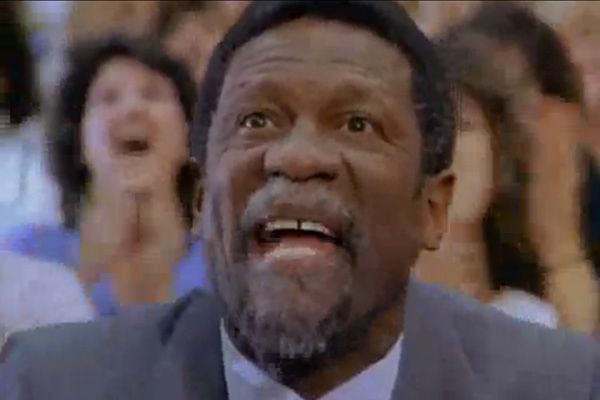 Welcome back to our series Rembert Explains the ’80s. Every so often, we’ll e-mail 25-year-old Rembert Browne a video from the 1980s that he hasn’t seen. Rembert will write down his thoughts as he’s watching the video, then we’ll post those thoughts here. This week’s installment was selected by Grantland reader Benjamin Ramm: Bill Russell on Miami Vice. If you have an idea for a future episode of Rembert Explains the ’80s, e-mail us at hollywood@grantland.com.

0:04 I love Miami Vice. Or the idea of it, at least. I definitely would have moved to South Beach, thrown away all my socks, and been a buddy cop if I had been a twentysomething in the ’80s. 100 percent.

0:15 There is a car going really fast in the episode. It looks like the Batmobile and the Knight Rider car, but I don’t think it’s either. Also, there aren’t any cars on the road. Completely traffic-less. Miami seems incredible and, oddly enough, vice-free.

0:20 The car is still unexplained, but that’s OK, because we’ve got a basketball game on our hands.

No. 32 just threw a nice behind-the-back pass. High-level basketball is something I like. Also: It’s a close game. I hope this is just a four-minute basketball montage in the middle of a Miami Vice episode.

0:27 The center on the blue team just did one of the worst away-from-the-ball basketball moves I’ve ever witnessed. It was some sort of imaginary screen pick coupled with a wave into the crowd, and I think I saw him order something from the concession stand.

0:28 Unrelated, but just a few seconds of this basketball action makes me want to watch all six seasons of Hang Time on Netflix, ASAP.

0:30 Something about the move no. 32 did looked super familiar.

It’s a familiar release. Also, he looks like someone. Unclear.

0:38 More important than figuring out the mystery man:

It’s almost like the cheerleaders and the crowd created a catwalk just for Crockett and Tubbs. They both look incredible. I wish I could be both of them for Halloween every year. Still haven’t found a way to mash up both men’s styles, outside of the obvious “dress like Don Johnson, and, you know, continue to have Philip Michael Thomas–like skin.” I CAN DO BETTER.

1:00 If that’s our only shot of Bill Russell in this clip, that’s the greatest cameo over. From what it looks like, however, he appears to be either a coach or a scout. Or maybe he’s no. 32’s proud pop. Again, unclear.

I wonder why they’re there? Someone definitely killed someone. Is Bill Russell a … murderer?

Ha. That’s just a sad thing they did there with that team name. Also, WHO ARE YOU, no. 32? I’m getting close. I can feel it.

You’re just going to be the only two in the stands to not stand up and cheer. These two ladies in front wearing hospital scrubs are losing their minds over a rebound, and y’all can’t even join in with a golf clap? Great job at confirming the fact that you’re huge narcs. Bravo.

Still the realest gap in the game. Sorry, Strahan. Also, between this and Russell’s latest acting gig, I’m convinced I need to discover this man’s full catalog. You know, the Bill Russell deep cuts.

JUST LOOK AT THAT SMILE.

1:21 Miami Vice Bill is definitely no. 32’s dad. He’s super animated whenever he does anything.

Greetings, Bernard King. Sorry for not recognizing you earlier. No one does the pump-fake baseline jumper quite like you, good sir.

1:35 Reading Papa Russell’s lips, young Bernard really needs to get back on defense.

1:43 These two, on the other hand, couldn’t be less invested.

It’s like they’re at a bad junior high musical. And it’s being performed in another language. They just don’t get it.

He just mouthed “that’s my boy.” What a heartwarming tale this is.

2:29 Bernard just slammed it on these fools and got fouled.

Bill is losing his mind.

2:50 I’m so confused. Why are the vice dudes here? I feel like something really bad is about to happen, which would be a huge bummer, seeing that this is such a joyous occasion. I don’t like their presence one bit.

2:55 Ha, look at them, letting Bill wear some of his rings. I wonder if that’s part of the plot? I wonder why he’s not wearing all of them?

I guess that would make it slightly harder to get lost in this masterful Bill Russell character portrayal, if he was that blatantly iced out.

3:03 This clip has turned into Bernard King making a shot, and then Bill Russell celebrating. Nothing more. I’m not saying this is getting old, but I need a third piece of action to take place, especially since our protagonists haven’t contributed a single thing to this episode, unless you count “not celebrating” and “staring blankly into the distance” as things.

Oh hello there, new gold-chained fellow who I’m sure doesn’t mean a lick of trouble.

NO NO NO NO NO PLEASE DON’T STAB BILL AND/OR TELL BILL THAT IF HIS SON MAKES ONE MORE SHOT SOMEONE’S GOING TO PAY.

PLEASE SAY THAT’S A KISS ON THE CHEEK AND NOT A GOON DEATH THREAT.

3:17 And now it is clear why our multiracial banditos are in the crowd. Something is fishy and they’re already on it.

3:55 Bill and goon are power-walking out of the gymnasium, headed somewhere. Said goon, for what it’s worth, comes up to Bill’s triceps.

Somebody is about to die.

4:07 TUBBS AND CROCKETT SPOTTED THE CAR AND ARE RUNNING, BUT THERE ARE ONLY 11 SECONDS LEFT IN THIS CLIP. PLEASE SOLVE THIS MYSTERY IMMEDIATELY, GUYS.

How does this episode end? I have no idea, but something tells me Bill Russell is being coerced by the goon degenerate mafia gamblers into convincing his son to throw the next games, or else they’re going to take all his other rings, kidnap his wife, and go Tonya Harding on his son’s knees. Somehow, however, our heroes will solve this predicament, but I haven’t the slightest clue how. Also, something tells me there might be more cameos in this episode. Might have to revisit this in upcoming weeks …

Nashville Check-in: The Best New Drama of the Fall Is Still Singing