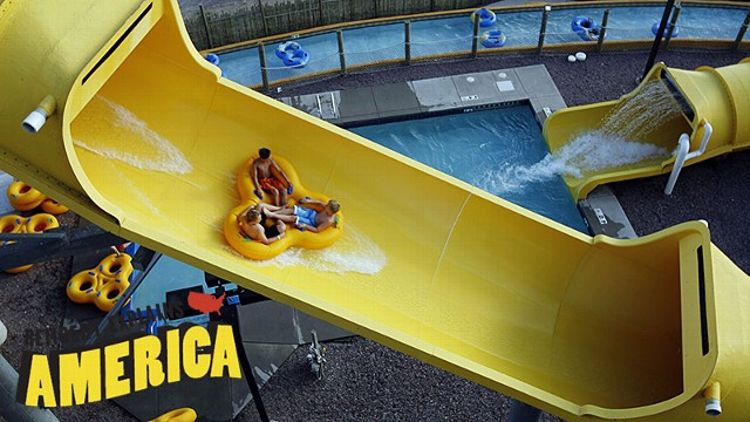 I never should have gone to the Wisconsin Dells.

This sounds like a criticism, but really it’s more of an assault on my decision-making abilities.

Entering the Wisconsin Dells city limits, you may initially be puzzled as to where the theme-park-related attractions are hiding, the ones you’ve been told about and seen advertised for miles. As I neared a big intersection, all I saw was a Walgreens. And a Starbucks. And a Jimmy John’s. And a Dunkin’ Donuts. This could have been any town in America.

But then you keep driving. And, just like that, there’s the roller coaster next to the giant Trojan Horse. And the upside-down building with the Tyrannosaurus Rex sticking out the side. And the signs for America’s largest water park.

I’d made it to the famed Dells. And it looked like nothing but pure fun. I had to get out of my car and check it out.

Curious at how to best get involved, I parked the car and headed to the closest information booth.

None of these words and phrases had any meaning to me. Not yet, at least. I approached the young man at the booth and asked him how it all worked. Essentially, the more attractions you bundle together, the more you save.

Asking the teenage boy what I should do, he quickly responded with a smirk and a question: “For how many people?” Confused, because I was alone, I replied, “Just me.” He paused for a moment, looking at the sheet of attractions.

“There’s Tommy Bartlett’s Exploratory, which you could enjoy … ”

“There’s Noah’s Ark, which is the biggest water park in the country, and that’s here … ”

I don’t know why he was so uninspired by these attractions — they all sounded amazing. I bought all four of his malaise-filled suggestions and went on my way. First stop: mini-golf.

Two minutes in, I learned why my fearless tour guide was so confused, not only by my presence, but by my excitement.

Dells Realization No. 1: Mini-Golf Is Not A Cool Thing To Do Alone As A Grown Man When Surrounded By Families

This is true for a multitude of reasons, all of which surround the general premise that mini-golf is supposed to be fun. Blasting through 18 holes of Par 1-to-4 putt-putt in 24 minutes is not fun. Playing holes out of order, so as to not rush the families of six that have decided to enjoy themselves instead of playing a speed round, is also not fun. Loudly faking full-length phone calls to make it seem as if you’re waiting on your “boys” to show up: shockingly not fun. Neither is getting a bogey on a par-4 and screaming, much to the dismay of that same family of six. Nor is hitting a hole-in-one, turning around, and immediately realizing not only that there’s no one else to play witness, but also that no one else cares. About you.

Just to hammer this point home: MAKING A VIDEO ATTEMPTING TO PROVIDE SOME PROOF OF YOUR PUTT-PUTT MASTERY THAT IMMEDIATELY GOES SOUTH IS, ALSO, NOT FUN.

I had to get out of there. No one was thrilled with my presence, myself included.

Needing to rid myself of attractions, I steered myself downtown to the area that seemed prime for shopping. There was food, there were huts to acquire old-timey sepia photos, and, again, more booths to buy tickets for attractions.

Passing all of them, looking to just sit still and have a drink, I froze.

Dells Realization No. 2: I Will Never, Ever, Ever Walk Into This Place, Ever

So let me be the first to say there is nothing inherently wrong with this place. But I can’t walk into Nigs and risk the chance of someone asking me if I’d like to “Nig Swig.” I just can’t put myself in that type of situation. No level of thirst and desire to sit can outweigh what possibly happens after someone across the bar looks at me and I think their eyes are saying “Nig? SWIG?”

So no. Forever no. But it’s not their fault. It’s America’s fault.

Walking swiftly past this place, I hopped in my car and drove around for a while. I didn’t know what to do with the Wisconsin Dells, but so far I was striking out left and right. But letting these tickets go to waste wasn’t in my nature, so I went to attraction no. 2.

My ticket said “adult” and I associated that with the “exploratory.” Like I was going to an adult exploratory.

But this is not how tickets work. I was simply an adult who purchased a ticket. And I realized this upon walking inside the first room and feeling as if I’d crashed little Samuel’s sixth birthday pizza party at Chuck E. Cheese’s.

Another place filled with children, their parental chaperones, and me.

Again, I was not supposed to be here.

THIS WASN’T FOR ME.

Weaving through the exhibit — a combination of robots, science games, optical illusions, and puzzles — I stopped at a tic-tac-toe computer installation. Wanting to further prove why I didn’t belong in this childish space, I played the computer.

So far today I’d shot 8 over par on a medium-difficulty putt-putt course, been identified as a potential pedophile in the process, narrowly avoided being asked to “nig swig,” and now I was losing tic-tac-toe battles to Face. This was an unfortunate day for the record books.

Looking for the exit, I entered the third building of the Tommy Bartlett Exploratory. And suddenly, everything was good in the world.

A room full of mirrors.

And suddenly, I was transported to a happier time. A simpler time. The days of SciTrek.

Chances are, if you weren’t a small, curious child in Atlanta, Georgia, between the years of 1990 and 1997 (or the parents and teachers of said children), you’ve probably never heard of SciTrek. But for those of us that fit that mold, the now-defunct science theme park extravaganza learning center was one of the highlights of our childhood.

To prove this point, I contacted a few individuals and asked for two sentences on SciTrek. The following are their responses, all received within 10 minutes of that text:

“Once a magical subterranean wonderland, it was the 3rd grade academic equivalent to crack cocaine, savagely gutted in the early aughts by our resurgent conservative legislature which believed exposing school children to science led to bestiality, the homosexual lifestyle, and urban density.”

“SciTrek is the pre-pubescent Magic City.”

“Stepping inside a giant kaleidoscope was trill as fuck.”

“The drunk driving game was too crunk, peering through the lens of a degenerate only to realize several years later the game comes in handy.”

“I seriously schemed with friends to buy the drunk driving simulator at auction. Failed #biggestregret.”

“Pre-digital camera, we’d try to time a jump or make dramatic hand movements with the flash to make different poses on the wall. Childhood captured.”

“It was a sparsely stocked “please touch” museum that must have been built solely because science teachers were getting jealous of the field trips history teachers got to go on.”

“The bubbles freeze screen. That place was legitimately heaven.”

“I remember bubbles as big as my house. I’m sure that’s an accurate memory.”

“It was way better than zoo camp.”

“I hated science. No second sentence.”

These are all fresh memories coming from people 15-20 years removed from visiting SciTrek. That’s how amazing it was. And because of those memories, I suddenly was thrilled to be in another place that tricked kids into learning science by being so fun.

Watching a kid losing his mind over magnetism, the color wheel, and kinetic energy never gets old.

Dells Realization No. 3: Nothing is better than fun science.

I’ve known that face forever. It’s just nice to remind yourself of that fact.

Eventually making my way out of Midwest SciTrek, I was feeling good. The Dells weren’t all that bad. Because of this high I was riding, I decided to test the limits of my happiness.

So I went to the car, changed clothes, and I walked into Noah’s Ark, America’s largest water park.

Dells Realization No. 4: YOU ARE NOT ALLOWED TO HAVE FUN IN A WATER PARK, ALONE AND WITH A BEARD AND STUDENT LOANS.

Before I could get any odd looks from the happy families, I kicked myself out. The moment came when I stood in line for a slide and was the tallest by at least 18 inches. I knew this wasn’t how things were supposed to be.

I just walked right out. Never even got wet. I’d rather “nig swig” all afternoon than frolic around that amazing water park alone. All I wanted to do was play, but everyone has that “old guy in the club” moment.

Leaving, I decided to find a hotel and take some time to think about my day. My choices: Atlantis and Mt. Olympus.

I picked Atlantis, less because of a mythological allegiance and more because of the nightlife establishment next door that almost made me crash my car.

I couldn’t wait to get in. You know, to get wett.

Apparently I was the only one. No one else was trying to get wett. Unreal. What a waste.

To be fair, there was one other guy in there. And he was getting super-wett.

Maybe even too wett.

Other than me, His Wettness, and the six employees of the bar, there were only four ladies on the dance floor, having the time of their lives as if the club were wett to capacity.

Which led me to my final realization of the Dells.

Dells Realization No. 5: Nothing is better than ladies’ night.

It just looks like so much fun. Here I was, complaining about an empty Wett while giving infinite side-eye when I was told “I’ve never seen it this dead before, it’s usually packed, lines are around the block on ‘Leap Year October Year of the Rat 99-Year Flood Thursdays,’ that’s when you have to come back.” And these ladies were across the room having the time of their lives.

Screaming in joy to Flo Rida. Over and over again. Ladies’ night knew how to make something out of nothing.

Next time I come to the Dells, it won’t be alone. Instead, I’m crashing a ladies’ night and will undoubtedly have time of my life.

Trailers of the Week: The Counselor, Ender's Game, Muppets Most Wanted, and More

Afternoon Links: Things Might Not Go So Smoothly for Carrie and Brody in Homeland Season 3