Rembert Explains America: Among the Truckers in Utah 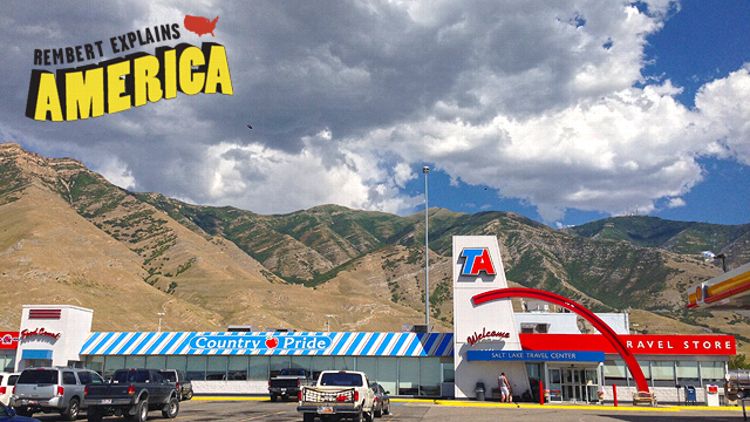 “You not gonna bring a gun with you?”

The man shook his head and angrily gestured to the wall, so disgusted he could do nothing but violently sip from his 100-ounce travel mug like it was a drag from a cigarette.

He said it to a room of seven, but no one responded.

To my far left, a man sat leaning against the wall with his legs propped up on the neighboring seat. His hat covered his eyes but was slowly slipping off his face. He never slept for more than two consecutive minutes, because a loud snore would rattle his calm, but he was never awake in these brief intermissions for more than 10 seconds.

In front of him, a man who made no noise sat quaintly with his hands in his lap, head down, deep in sleep.

And to his far right, two seats were occupied by a couple, cell phones in their hands, who’d become victims of the fatigue wave sweeping through the room.

All that remained: the speaker and his neighbor to the right.

Watching Mountain Men on the History Channel. In a gas station. In Utah.

It was the middle of the day and I was aggressively starting to fade.

In my attempt to make the push west to Reno from Colorado, one giant mass stood in the way, determined to make sure that didn’t happen.

Taking the southern route, Interstate 80, I drove the first few hours without stopping and realized that if I continued on this push without a break, with the (unnecessary) goal of shaving five minutes off every hour, I might go crazy.

So I gave up and decided to let Southern Wyoming wash over me. I began pulling into every town as a way of breaking up the beautiful monotony that was the Wyoming landscape.

This is only about seven places, mind you, but the time spent in the stops began to add up, especially once I started seeing signs like this:

After arriving (and eventually leaving) Wyoming’s “Little America,” easily the most underwhelming rest stop/tourist trap in the Northern Hemisphere, I began to yawn. The yawning continued through Wyoming into Utah, causing me to pull over with a full tank at a gas station.

I was torn on how to proceed. It was two in the afternoon and I wanted to fall asleep. I certainly wasn’t making it to Reno, but it was too early to consider calling it a day. I could sleep in my car, but I really didn’t want to sleep in this hot, bustling parking lot.

Still unsure, I walked into the building, housing a combination Taco Bell/Burger King, a sit-down restaurant named Country Pride, and a TravelCenters of America.

Looking for a bathroom, I walked past a staircase with a sign that indicated upstairs showers and a room with a television. I didn’t dare go upstairs, however, because that was certainly a relaxation area for truck drivers.

People going from coast to coast, often living out of their vehicles, pulling over to prevent dangerous, highly fatigued driving, before they got back on the road for another ungodly stretch of miles.

I needed to convince myself I was worthy of this mythical “upstairs area” that I’d seen in so many truck stops. Did I deserve the splendors of the trucker hangout? Would they accept me? Or better yet, how harshly would they shun me? Should I change clothes? Are they checking IDs?

You’d think I was trying to break into an Inauguration Ball.

As I stood there, a man in his 50s with a full beard and ponytail walked down the stairs. Before he hit the final step, he turned his body, as if welcoming me up, and said, “You headed up?”

Caught off-guard, I hesitated. “Yes, thanks.” And I walked upstairs.

The television room was set up like a home theater. Five seats in the front, six in the middle row, and seven in the back. Upon entering and having the room’s eyes fixated on my entrance for no more than half a second, I walked to the back row, parked it, and attempted to be as invisible as possible.

Everyone in the room was silent, fixated on the action on the television. The show was Mountain Men, a show about men who live in the mountains. After about five minutes of silence:

A man eating sunflower seeds had walked into the room and interrupted the calm.

“Mountain Men, I guess,” replied one of the two men up front. He was an older black guy, and his neighbor was a younger white guy. They both had giant drinks sitting on a table. There was no evidence that they knew each other prior to this screening, but purely based on their body language I’d convinced myself they were old friends.

“Sounds interesting,” the room’s new visitor said and grabbed a seat. The room was now two-thirds full, with 12 of the 18 seats occupied.

I continued to feel wildly out of place, as if I’d snuck into an elite social club, because I was the youngest in the room by at least 10 years and was wearing a little neon tank top. A couple walked in and sat down. The grand total was now 14.

Upon sitting down, they started chatting. After two minutes of this, one of the men in the front slightly turned around, as if to suggest they needed to pipe down and stop interrupting his stories. They got the message and shut up.

Pleased that I was no longer the serious offender in the room, I smiled, got comfortable, and became oddly invested in the show. Grateful that I’d picked the back row, one with a wall to lean a head against, I —

“Can I buy a cigarette off someone?”

I opened my eyes as wide as they could go, looking as if I’d been defibrillated. My level of disorientation was high. I’d fallen asleep, a hint of drool was on my left cheek, a new voice was asking questions, and only three of the previous 13 people were still in the room. How long had I slept? Was I snoring? Was everyone mad at me because I was snoring? Wait, is that why everyone left, because I snored? Wait, do I snore?

The only question I could readily answer was how long I’d slept. Before turning to my phone, I assumed about 45 minutes, due to the noticeable amount of energy I suddenly had.

“Yeah man, here. But keep your money,” my new neighbor said to the cigarette seeker. As this was happening: “You better hurry” came from the front of the room. One of the mountain men was trying to walk across an ice pond, and he was walking awfully slow. I wanted to laugh or chime in, but I was still dealing with the embarrassment that may have been my four-minute snore-induced room exodus.

“Keep moving, you dummy,” he continued on. “In a straight line.”

The peanut gallery was growing. He was beginning to talk up a storm, but the commentary was not directed at the rest of us. Even though the rest of the room was laughing at his jokes, which continued through the commercial break, he saw no need to acknowledge we were present. Just the television.

After a few commercials, I figured it was about time to go. I had places to be. But now I also wanted to see how this episode ended. Would he make it across that ice pond? So I stayed, got comfortable, and —

This time, the accidental nap was 20 minutes long. Looking around, everyone in the room was passed out, with the exception of the two viewers up front.

On the TV, one of the mountain men was on the hunt for a bobcat and decided to go out in the woods to find it with his dogs, without a weapon, much to the chagrin of our front-row Mountain Man recapper.

“Oh man, this bobcat is about to mess these dogs up,” the other guy up front said. I shook my head in agreement, of course, to no one. Leaning back —

Realizing I’d fallen asleep for a third time, I turned to my right and the cigarette seeker was not only back, but was trying to chat. After a commercial for Ice Road Truckers, a moment in which the room was completely quiet, he started chatting up anyone who would listen.

“You ever fallen asleep standing up?” responded the head talker in front, again without turning around to truly engage in any conversation.

“Yes, in fact, I have — didn’t even know I was asleep,” he responded. It seemed like they had a history. Some trucker beef from way back. I wasn’t sure, but this certainly wasn’t the first time they’d met.

Moving across the room, he made his way to his other neighbor and they talked about animal traps for five minutes. And then California politics.

“Eighteen years since I’ve been to California,” he said. “That’s my home. Schwarzenegger fucked that place up.”

I was beginning to get hungry, so I walked downstairs to get some food. In the shop area, the sit-down dinner establishment, and the Burger King/Taco Bell, I saw people that were once in the room. Originally set on taking the food to the car and leaving, I figured I might as well eat and watch the end of this episode, and then leave.

I was hooked. Less on the show and more on my new hangout.

As my foot hit the first step, I caught the eye of a man looking for the bathroom. And at that moment, we had a conversation with only our eyes. His eyes were saying: “Wait, can anyone go up there?” Mine: “Not just anyone.” And then I walked upstairs.

Arriving back in the room, not 10 minutes after I’d left to find food:

I was the lone survivor. And it stayed like that until the end of the episode. But then another episode of Mountain Men came on, with the intro credits set to a loud, super-emo cover of Lynyrd Skynyrd’s “Simple Man,” which jolted the entire room awake.

The man in the front who had been the heart and soul of the room, upon rising, looked back at the room and glanced my way. He finally acknowledged my presence positively with a head nod, and then turned back around and prepared himself for another episode.

He wasn’t going anywhere. And neither was I. We were all struggling to get from Point A to Point B, and we depended on this room to make sure that happened.

So I ate, chatted, and drifted in and out of sleep in that room for two more episodes.

Here's How Dave Chappelle Might Be Making You Laugh These Days