The Mess in Texas: Reese Witherspoon and Sofia Vergara Crash Out in ‘Hot Pursuit’ 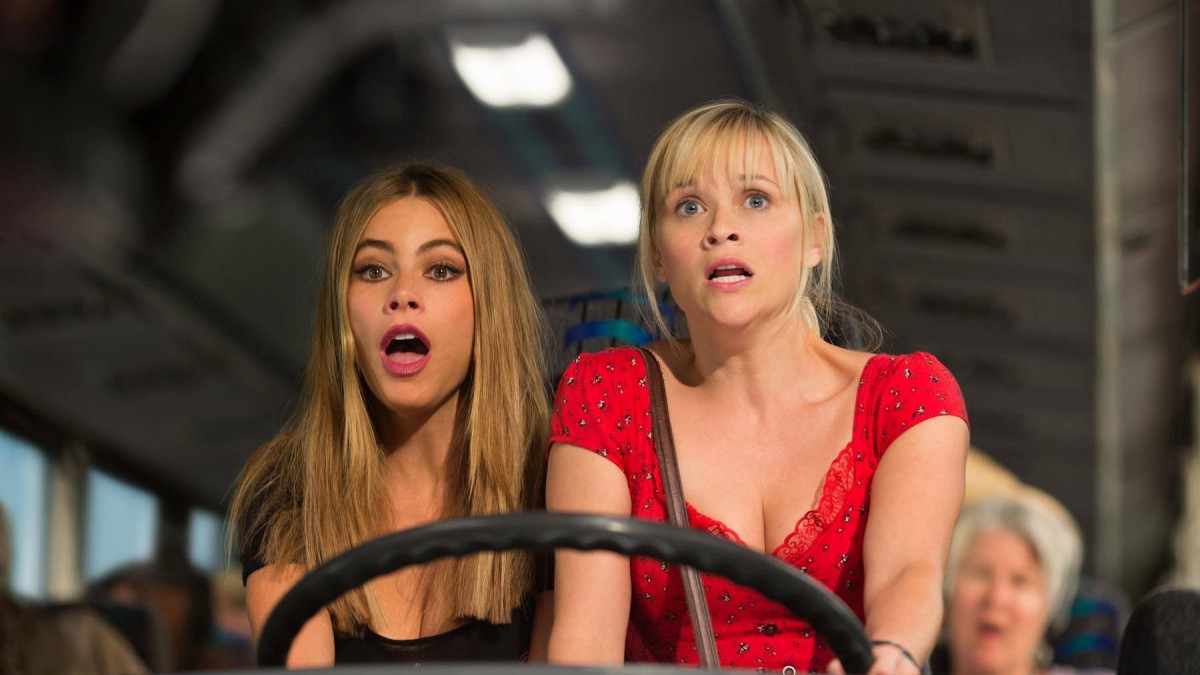 What is the deal with Reese Witherspoon’s drawl in Hot Pursuit? One minute it’s a soft Southern purr. Another, it’s like a chicken about to lose its head. Witherspoon shares most of her scenes with Sofia Vergara, whose appeal seems to hinge on the Cubism of her Colombian accent. Acting alongside her must be like going shopping with somebody from RuPaul’s Drag Race: Jeans and a T-shirt aren’t going to cut it. So Witherspoon commits to twanging until you start to hear a banjo when she talks. The dueling accents are meant to be part of some mounting joke, in which each woman sounds like an idiot to the other. It’s not funny. Neither is most of the movie, which throws these two at a wall of gags and hopes they stick.

The plot is tired. The feds want to prosecute a Mexican crime boss/drug lord (Joaquín Cosío). The key witness, a drug dealer (Vincent Laresca), is due to be driven from San Antonio to Dallas, but two competing pairs of assassins arrive at his mansion. The ensuing shootout kills him and the detective (Richard T. Jones) who was supposed to drive him to San Antonio. Witherspoon is Officer Rose Cooper, the dead detective’s sidekick, who was shepherding the witness’s wife, Daniella Riva (Vergara), a motormouth with a brick-house body.

The job was supposed to be redemptive for Cooper, who had been shunted to the evidence room after a Taser disaster ripens her for ribbing. (Given the news lately, the timing is bad for a cop Tasering anybody. I, at least, cringed. This movie goes there twice.) Daniella — Cooper calls her Mrs. Riva — is introduced insulting her husband in Spanish, at top volume. When he dies, she happily transfers the putdowns to Cooper: “gringa,” “flat-ass,” “birdbrain,” “cucaracha.” That’s the movie’s bitchy flavor: You suck.

Since the murders somehow turn them into fugitives, there’s plenty of alone time for Vergara to breathe fire all over Witherspoon and for Witherspoon to exhibit flame-retardancy. But I wanted a comedy, not a safety demonstration. The car they’re using for this nonsensical four-and-a-half-hour drive to Dallas overheats, then a truck crashes into it, clouding the screen — and Cooper’s nostrils — with cocaine. I wish I could confirm the hilarity of a coked-up Witherspoon, but it’s not there. Changing the velocity of her speech doesn’t maker her funnier. It simply catches her up with Vergara.

On the run, there’s time for them to pretend to make out in order to disarm a shotgun-wielding redneck (Jim Gaffigan). (The excitement costs him a finger.) They steal the truck of an actual fugitive (Robert Kazinsky), who’s been asleep in the flatbed and who sets his sights on Cooper. There are jokes about tampons and menstruation. With Witherspoon writhing in Vergara’s lap, they commandeer a tour bus full of exhilarated old people, the way Sandra Bullock did in Speed, except Keanu Reeves doesn’t climb all over Cooper to reenact an episode of Red Shoe Diaries. There’s a sequence at a quinceañera, which contains a scene between the stars in a bathroom, which reminded me that “crazy, gayish bathroom high jinks” in movie comedies are the new restaurant-kitchen chase sequence. Of course, leaving no cliché unused, this movie has one of those, too. 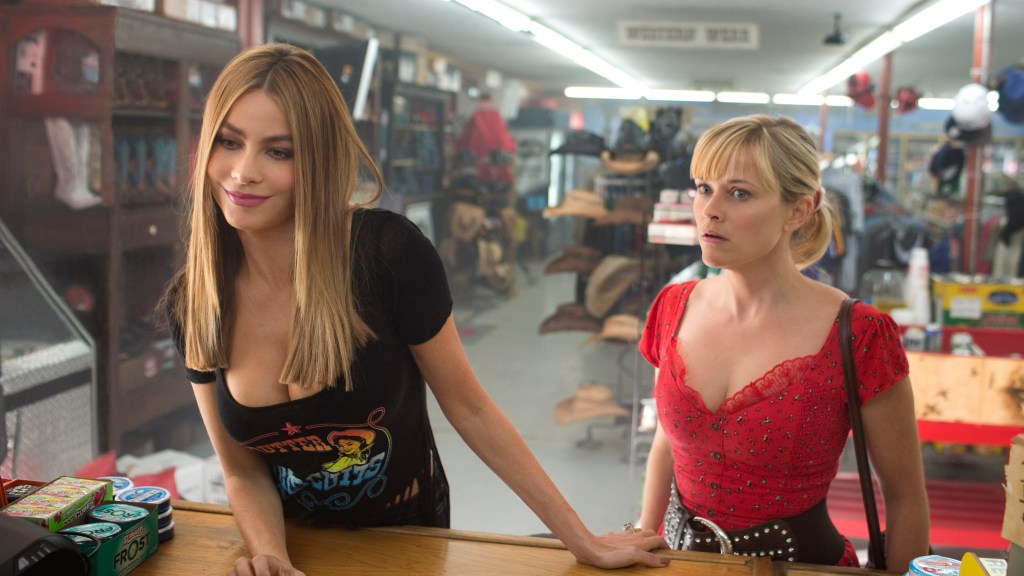 It’s not as though this dumb-ass movie is any dumber or assier than The Heat or Get Hard — although the plot twist in Hot Pursuit fails every test of comparable logic. But those movies are watchable because the people in them make sense together. Kevin Hart, for instance, probably accessorizes with everybody, but in Get Hard you can hear the click with Will Ferrell. The Heat is a better movie than Hot Pursuit and most of Hart’s comedies, but being “better” is less important than Sandra Bullock and Melissa McCarthy being exactly right for each other. This movie feels like something those actresses might have been offered and probably rejected, and it might have worked with them as the stars. McCarthy could sell a tampon joke, and Bullock should be too old for that uptight-cop shtick to work, but only two years ago, it did. When Bullock and McCarthy connect, there’s a boom. Watching Witherspoon and Vergara, I imagined Bullock and McCarthy driving that tour bus and longed for the involuntary laughter you’d get from those two in a moment like that. Witherspoon and Vergara don’t bring anything out of each other. They’re trying too hard to make a necessary case for more woman-fronted film comedies, but the material neither flatters them nor advances the argument (the script is credited to David Feeney and John Quaintance). They’re left to squawk and hiss and mug and hope it works. You never feel more than an agenda between them.

Witherspoon is interesting, at least. She tries some of everything — some of her slum trash from Freeway, some Tracy Flick from Election, some Elle Woods from Legally Blonde. When she doesn’t look like some part from her past, she looks like other actresses. The drawl and cop uniform make you think about Holly Hunter in Raising Arizona. Her determination to make the performance work allows you to wonder what Amy Sedaris would have done with the exact same role. You’re thinking about everything but what Witherspoon is actually doing here. Her best moment comes when she shows up at that quinceañera disguised as a man. You don’t believe it, but neither does Riva, so it gives Witherspoon and Vergara a contrast to play. Her job in those scenes is to be both unconvincingly convincing and convincingly bogus. She’s so foolishly committed to the disguise that you can’t help but laugh. Otherwise, all you’re noticing is Witherspoon’s vocal stunt work, the way her voice crashes around. It’s the Melissa McCarthy of accents. Vergara has been a riot on Modern Family, twisting a stereotype of ditzy vivaciousness until she has made origami. The tightness of the writing and direction of that show allow for that. Here, she screams and wails and bunches up her boobs. She talks the way Dom Toretto drives. Apparently, her idea of a vacation from network TV is to act like a parolee from a Roger Corman movie.

It’s probably not an accident that Cooper and Riva are fugitives on the run and, for a moment, that their vehicle of choice is a vintage convertible. Neither woman is named Thelma or Louise, and, sadly, this movie doesn’t risk even going near a cliff. Anne Fletcher directed Hot Pursuit, and she gives it the same clumsy staging that she used to make 27 Dresses and The Proposal intolerable. The first movie was a hit and the second a smash, suggesting that Fletcher has a knack for making humiliated ladies something an audience clamors to see. This new movie isn’t the dignity-free, all-you-can-eat bonanza that The Proposal was for Bullock. But anyone craving the sight of Witherspoon and Vergara wrestling each other for control of a pistol won’t go home hungry.

Fletcher closes the film with outtakes, which is always the greatest insult with which a movie can send you home: its leftovers. In this case, seeing Witherspoon and Vergara relaxed and cracking each other up with flubs is both amusing and dismaying. Only delusion could explain the decision to go straight from Hot Pursuit to its embarrassing bits. The whole movie is outtakes.

Welcome Home, Hamburglar. Sorry I Forgot About You. I’ll Never Do It Again.