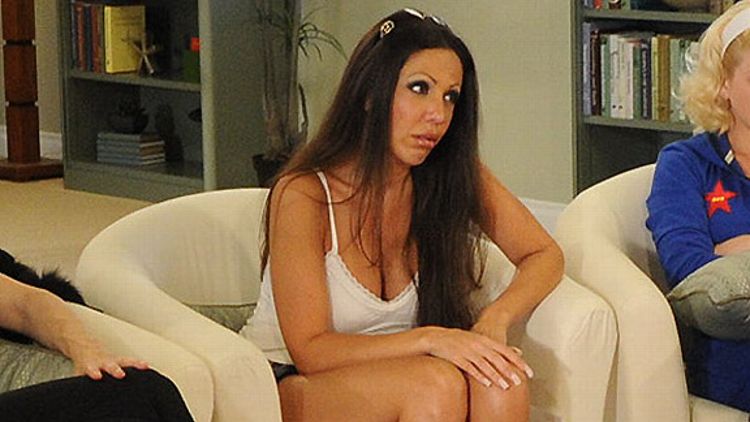 God bless America! Monday’s celebration of our national independence gave us the American flag Budweiser can, a new record for hot-dog eating, and a break from the soul-draining torture of watching The Bachelorette and Basketball Wives. Both shows aired repeats on the Fourth, so the GMs of the GRTFL were forced to rely on the rest of their rosters. It was a sink-or-swim week for our role players, some of whom seized the opportunity, while others just went crying to Dr. Drew.

The void in the schedule left only Celebrity Rehab, The Challenge: Rivals, and Love In The Wild in play this week. The inclusion of that last one in our league was based on title alone, a mistake I will be paying for every Wednesday in one-hour increments of my life. Last week I said the jury was still out on Wild. Well, the verdict’s in — this show is terrible. So terrible that I didn’t even root for my players to score, I just rooted for it to end. I imagine the sole reason anyone watched this abomination from start to finish was because the local news teased a story about a deadly grizzly-bear attack during the commercials. The only thing that could have saved Love in the Wild this week was if that same bear had stormed the set, eaten the show’s host, and threatened to do the same to any contestants who didn’t flee the “unmatched area.”

Still, there were some respectable performances this week — most notably from the Long Island Lolita herself.

Amy Fisher (Celebrity Rehab, Simmons): 35 points. Simmons’ second-round pick came to play this week, kicking things off with a solid 10-point vomit. You know you have a problem when a lack of alcohol makes you throw up. Next, she tacked on another 5 points for crying during her one-on-one with Dr. Drew, and 15 more when she threatened to leave the show and briefly fled the premises. Then, to solidify a 1.5-point lead for Simmons, she cried again at the buzzer. Amy Fisher has arrived.

Michael Lohan (Celebrity Rehab, Connor): 20 points. Once again, Connor’s first-rounder tallies 20 male crying points. Lohan cries so much he makes Dick Vermeil look like John Wayne. While describing an incident in which he threw the “channel changer” at his 8-year-old son, he broke into tears. The only thing more embarrassing than his parenting skills is that he’s made it so far in life without learning the term “remote control.”

Dwight Gooden (Celebrity Rehab, Lane): 20 points. The Doc Gooden who baseball fans knew and loved no longer exists. In his place is the Gooden on Celebrity Rehab, whose urine tested positive this week for cocaine. This is sad for fans, but highly encouraging for Blurcle Jerks GM Lane Brown.

Theresa and Camilla (The Challenge, Jacoby and Simmons): 15 points. This week, Theresa and Camilla scored 15 points each for claiming they were going to quit the show and reneging. Shameful. I wonder what brave, non-quitting, non-reneging Challenge host T.J. Lavin thought about this. In fact, I am going to watch Love In The Wild next week, and every week after that, for fear of what T.J. would think of me if I didn’t.

Bill Simmons (The Right Reasons): I can’t watch these shows without constantly thinking about scoring categories that we forgot to include. For instance, when LeRoy (from The Challenge) landed on Mike in the water and Mike made that crazy whimpering noise (should’ve been 15 points), followed by his coughing up blood (25 points) and being taken off in an ambulance (15 points), that should have been a 55-point sequence. But we never considered whimpering, blood-coughing, or ambulance-riding as point-getters. And frankly, we failed America.

The bigger miss by us: not remembering to give 15 points for any defense of choking during sex, 25 points for making it clear to the person who’s listening to that defense that you’re all right with them choking you, then minus-10 points if you get turned down. That would have earned 30 points for Mandy (The Challenge), who admitted to C.T. that she enjoyed being choked by her sexual partners, then made the case for sex-choking so strongly that C.T. decided he couldn’t do such a thing because if it went wrong, nobody would believe that he was ASKED to choke someone and he’d spend time in jail … I mean, how did Mandy not get points for that? If it’s any consolation, she’ll always be known as The Chokee in my house now. Actually, that should be worth 25 points: If you can pull off the nickname “The Chokee,” you’ve done something special. Mandy has done more for choking than anyone since Dr. Heimlich and Karl Malone. I continue to think the Real World/Road Rules Challenge should be our fifth major professional sport.

Last note: ABC didn’t run a new Bachelorette this week, so I got my Ashley fix by spending two straight hours at my local Starbucks watching a moderately attractive barista get halfheartedly hit on by guys who were out of her league, then gradually lose her self-esteem when she realized that all of them were there for coffee and not for her. This league has ruined my life.

David Jacoby (Blanket Coverage): What happened to C.T.? He’s still the greatest athlete our country has ever produced, but something’s different. He wears glasses, tans his upper thighs, speaks in full sentences, and demurely sips red wine while making rational decisions. I would go into more detail, but every time I write anything remotely negative about him, I imagine him reading it, tracking me down, and punching me in the neck. I would carry mace for protection, but I’m pretty sure he drinks a can of mace every morning the way you and I drink coffee.

Also, the producers of The Challenge have failed us this week. If I were producing this show, I would have a huge neon sign in the editing suite that said, “No episode goes to air unless the cast gets drunk.” As a matter of fact, this sign should probably just come free with all editing software.

Lane Brown (The Blurcle Jerks): Bai Ling, if you’re reading this: Get down from there! It’s dangerous up there on that roof and my team needs you back in the house. Trust me, I’d happily accept 50 successful-escape points (and if that’s the choice you make, I’ll support you. Just try to aim for the bushes) — but I’d rather take 30 failed-attempt ones to keep you in the game. There’s so much more fighting, coitus-denying, and making Dr. Drew cry left to do! Also, on your way back in, be sure to leave a window open for Lenny Dykstra.

Jay Caspian Kang (Fraudulent Coitus): If Steele Dewald doesn’t impregnate Heather Pond, I’m going to give it a shot. RULE AMENDMENT: If a team owner successfully impregnates one of his players, the game ends and a ticker-tape parade is thrown in downtown Los Angeles.

Joe House (The Fantashiques): WARNING: The following is dramatically unfunny and probably highly annoying. That’s what you get for inviting a lawyer into this goat rodeo.

I have an objection to the 15 points awarded to Jacoby and Simmons for Camilla’s and Theresa’s “threatening to leave show and not following through.” I don’t think either prong of that performance category was satisfied. First, I would argue that they didn’t really “threaten to leave,” but rather attempted a well-conceived/almost-well-executed ruse concerning their attitude and approach to the jungle competition to gain a tactical advantage. They went around to all who would listen and loudly proclaimed intent to throw the game, knowing full well that they were going to (admirably and honorably) fight their guts out in the jungle. That wasn’t a threat to leave — it was a sabotage.

I might think differently if either of them had indicated that they were going to altogether skip the challenge and pack their bags — that’s the kind of bitchy/entitled/short-sighted/selfish/attention-mongering misbehavior that I think informs the spirit of the category. But that ain’t what went down. Their conduct strikes a whole lot closer to a by-any-means-necessary effort to stay than a “threat to leave.”

Perhaps more compelling, though — I don’t see how we can conclude that they didn’t “follow through.” THEY ARE NO LONGER ON THE SHOW. They really, really, REALLY “followed through.” Even if we concede that the “threat” prong was somehow satisfied here (and for the reasons above, we can’t), there can be no doubt that they “left the show.” Because they did.

On a broader note, it’s my view that we are now extremely unlikely to see ANY points in this performance category awarded to contestants in The Challenge: Rivals. Not only are the incentives all directly to the contrary, but the CR crew is now hip to the game. Even doe-eyed Mandi. The same cannot be said for Celebrity Rehab, however. Between Amy Fisher, Steve Adler, Bai Ling and Michael Lohan, I’m expecting more false-departure threats than a certain dong-photo-ing hick from Mississippi.

Last point: How in the hell is Jay Kang’s team still in negative-numbers after FIVE WEEKS OF COMPETITION?!? A truly remarkable feat of draft and trade ineptitude, as though he is channeling an unholy amalgam of Scott Layden, Chris Wallace, David Kahn, and Isiah Thomas. Simply stink-tastic. Congrats, Kang.