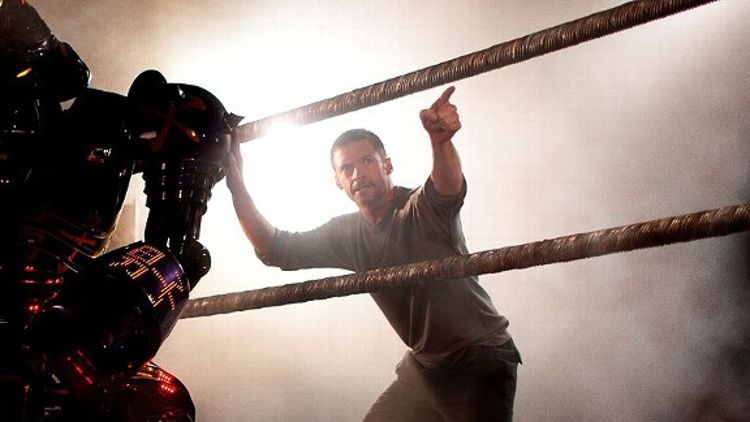 In theaters today: Real Steel, the world’s first-ever robot boxing movie. Just when he thought he was fresh out of chances, Hugh Jackman reconciles with his estranged son and together they take Atom, the little robot that could, all the way to the World Robot Boxing championship. It’s … it’s kind of the best? Ridiculous, but fully self-aware, and full-on heart-warming. Amos Barshad and Vulture’s Logan Hill were so moved, they had to talk it out.

Barshad: People still wondering if they should see this movie: in the first ten minutes, a robot punches a bull in the face.

Hill: After Michael Vick, you start with your hero trying to knock an animal unconscious with his enormous metal robot? Somehow, dog-fighting seems fairer. They even just outlawed bullfighting in Spain.

Barshad: Then we get some really excellent fake robot-technology talk: “The Brazilians are crazy about that voice recognition stuff!”, “The composite armor looks the same,” etc., etc.

Hill: The geeked-out details were crazily specific that you had the feeling the writers just loved these ‘bots and that Jackman was really like some car-nut talking about his vintage Camaro. That made sense, given that I felt like the whole movie — as I wrote in my review for Vulture — was a mega-metaphorical take on the collapse of the American steel belt and auto manufacturing. When Zeus, the perfect evil robot champion emerged in the end as an embodiment of cold scientific design, I wasn’t at all shocked to find that his creator was an inscrutable Asian hipster: Asian and urban, versus Jackman’s down-home working-class bro. Did you see that? Or was I just high on robot fumes?

Barshad: I was too overcome with emotions. Now that I know humans will always defeat robots as long as we try with all our hearts, I feel much better about theoretical Skynet situations.

Hill: Amos, the robots who made this movie are just tricking you so you’ll let down your defenses. My inner twelve-year-old logician is suspicious. The premise of the film is that Atom is a “a sparring bot, built to take a lot of hits, but never dishing out any real damage.” And we’re supposed to believe that Zeus, the most expensive, advanced robot in robot history, was built with shoddier defensive parts? Clearly, Zeus threw the fight because he didn’t want to draw more attention to his robot clone army.

Barshad: Thoughts on the kid training the robot to dance? Extended Bieber homage?

Hill: I love that. In every single case when Shawn Levy asked himself, “Would this be too ludicrous?” His answer was “Nah, let’s go for it.” Except for once. Were you also disappointed that Atom and Max didn’t do a big dance before the final fight? I wonder if they filmed all kinds of moonwalking and popping and locking and just thought, “Um, even for this film, that’s too silly.”

Barshad: YES! How were we robbed of climactic robot/human choreography? By the way I thought the kid totally pulled off ‘sassy near-orphan who wants to believe again,’ but my screening buddies were hating.

Hill: Your screening buddies have hearts of stone. The kid was so cute and preternaturally wise that I wanted to adopt him so he could take care of me, advise me on personal finance, and otherwise be my life coach, as he was to his deadbeat gambler father. And Jackman had his Wolverine mojo working. For an Aussie song-and-dance guy, he sure knows how to do blue-collar macho.

Barshad: Jackman slayed, the kid slayed. The only problem, then — Evangeline Lilly. Not necessarily her fault, though. Tough to pull off the “lounging on my boxing gym’s rooftop garden in cleavage bearing sleepwear” vibe.

Hill: The overkill with the villains were hysterical. You had the Evil Hick, the Ice Queen Oligarch, the Japanese Human Computer, the Anarchist Punks. First time I’d seen actual “anarchy” symbols in a while — must be some retro thing in the future.

Barshad: Also: in the future, punk rockers will wear crisscrossed suspenders with no undershirts.

Hill: Will there by a Fiona Apple “Shadowboxer” mash-up recasting the film as a romance between Jackman and Atom?

Barshad: When the kid takes Atom out for a walk, and they stare into each other’s eyes for a while, the guy in the row behind me got big laughs with “are they gonna make out now?”

Hill: I was grateful I could understand what the robots were doing, unlike in Transformers, but did it bother you that the robots never felt pain?

Barshad: Atom had feelings, right? When he stares at himself in the mirror, it was like the poor man’s version of Ceasar asking Franco if he’s also a pet.

Barshad: It will go down in New York’s World Famous Bing Arena.

Hill: Was Atom sentient? Levy cheats by making Atom a rote copycat and then hinting that he’s got feelings. Normally, I’d say this was a half-assed cop-out but, in this circus, it felt more like doubling down.

Barshad: True enough. One last note before we go — the morally-corrupt rich guy’s ascot was the shit.