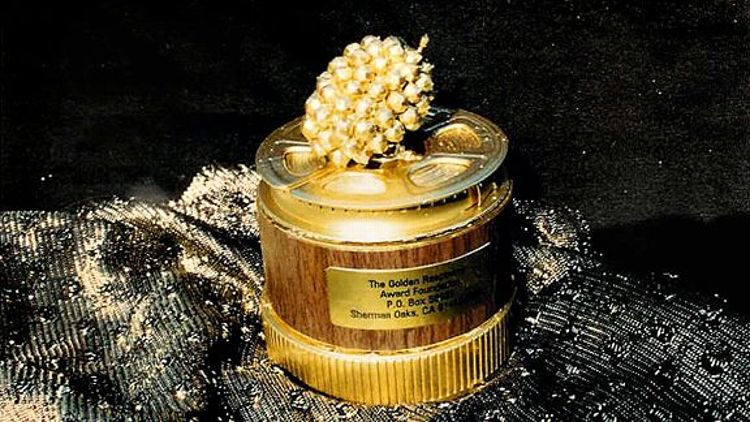 Or, rather, will it be a supporting vampire, or a supporting werewolf? With its plentiful stock of wolfcake and bloodsuckers, The Twilight Saga: Breaking Dawn – Part 1 is a bonanza for a category that’s often among the Razzies’ most predictable. Due to a fluke of scheduling, though, the name-brand Supporting Actors the Razzies typically love — Burt Reynolds, Marlon Wayans, Verne Troyer, Jon Voight, and (of course) Rob Schneider — have zero movies due to be released in 2011. That means some fresh Razzie meat come January 23!

Will Jackson Rathbone follow up his shocking Razzie win last year with another nomination? Might Taylor Lautner have better luck in Supporting Actor than he did in Worst Actor last year, when he lost to Ashton Kutcher? What about Kellan Lutz as vampire Emmett, the most bloodless of the bunch? Or Michael Sheen as Aro, who seems prepared to devour the scenery like so many shrieking coeds? Or Jamie Campbell Bower, who … uh … we can’t remember who “Caius” is. At any rate, they’re all front-runners, so let’s put them there.

The only real question: How many of the five nominations can Twilight capture? I’m betting on three. Take your pick who gets ‘em.

In order of likelihood.

Hank Azaria, The Smurfs
The only thing that might hold Azaria back is if voters feel his role as Gargamel — with its heavy makeup, foreign accent, and cartoonish awfulness — is simply too Razzie-baity.

Ashton Kutcher, New Year’s Eve
He was nominated (and won) last year for a lead role in Valentine’s Day, but this quasi-sequel’s cast list is so outlandishly large it’s hard to imagine him in anything but Supporting this year. It still depends what he decides to campaign for, though.

Ken Jeong, The Hangover Part II
Though he was far from the worst thing in this awful movie, insiders whisper he’s got real Razzie heat. Alternate possibility: the monkey.

It’s a tough year to be a supporting actor; in any non-Twilight Razzie season, all of these actors would have legitimate shots at Razzie glory.

Sean Penn, The Tree of Life
Sure, the movie was a masterpiece. But all Sean Penn did was stare up at the sky and whisper, and then he shit-talked his own movie! (Sort of.)

Harrison Ford, Cowboys & Aliens
Given the crowding in this category, his awards team may push him for Worst Actor, but voters may see through that category fraud and put him here where he belongs.

Jeremy Piven, Spy Kids: All the Time in the World
Only because Entourage is ineligible.

Al Pacino, Jack and Jill
Does he do anything more than that thing with the hot dog in the trailer? If so, he’s got a nomination locked up. Even if not, he’s got a good shot.

Contagion and Warrior are actually good, or at least not totally bad. Luckily, though, RazzieWatchers, we’re present this week for the likely birth of a bad-movie legend. What else is there to say about Bucky Larson: Born to Be a Star? It’s apparently not screening for critics, so we’ll have to wait until Saturday to read everyone’s rage-filled missives. (Sample audience pre-review on Rotten Tomatoes: “I wonder if even Armond White would be able to give this abomination a positive review.”) For true-blue RazzieWatchers, this is an exciting weekend. Make sure you get out to the theater to see Bucky before he shoots his wad!

Caution: Do not watch the trailer for espionage thriller The Double (September 23) unless you want to know literally the entire plot of the movie from beginning to end. On the other hand, given that it stars the deeply unappealing duo of Richard Gere and Topher Grace, it seems unlikely you’ll actually see it. We’d love to see the rundown of who passed on those parts! We imagine they started with, like, George Clooney and Ryan Gosling, and offered it to Gere and Grace only after some poor assistant crossed “Wesley Snipes / Penn Badgley?” off the offer list.

Dan Kois is a longtime Razzie guru and the founder of Dudz 4 Kidz, a nonprofit devoted to fostering a love of bad movies in the next generation.

The Ying Yang Twins Like Big Butts for Charity