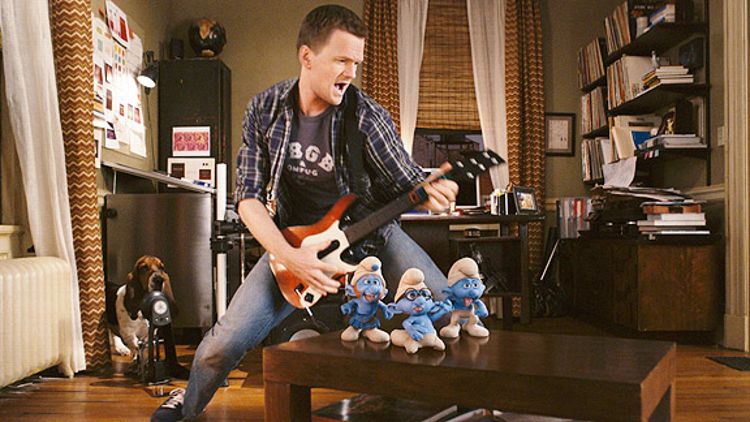 We’re skipping the usual predictions this week because this week’s releases have us too excited. It’s Christmas in July for RazzieWatch, as Hollywood trots out two turkeys with serious Razzie heat on the same day. It could well be … the Crapture! (Of course we haven’t seen either of these movies, so it’s possible that one or both of them might be great! But having seen the trailers, I think it’s fair to say there’s a good chance both will stink on toast.)

Of course, for die-hard Razzberry fans, this week offers a serious dilemma: Who do you throw your weight behind? The chapped, wind-blown desperadoes (and aliens) of Cowboys and Aliens? Or those little blue scamps The Smurfs? While both have a shot at picking up a pile of Razzie nominations, one will surely reign supreme — but which one?

It’s a puzzler, all right! It’s a choice that gets right down at who you really are, deep down. These movies represent two very different strains of awfulsome, both of which have been beloved by the Razzies since the very first Golden Raspberry Awards. Let’s call them the Titanic and the Xanadu, after the 1980 Worst Picture nominees that created the template.

Cowboys and Aliens is totally a Titanic. Trade reviews are good, but we remain unconvinced. Enormous, expensive, and seemingly humor-free, it’s the story of a haunted stranger (Daniel Craig), a pitiless sheriff (Harrison Ford), and the desolate Western town of Absolution. (Seriously, it’s called Absolution.) When freaking aliens fly down from outer space and start blowing things up, you might expect the movie to have some fun with the inherent silliness of the concept. But no: There is nothing silly about a bunch of dudes riding horses while being zapped by laser guns. Cowboys and Aliens takes itself very seriously.

In that way, it’s a movie proudly in the tradition of previous Worst Picture nominees like Heaven’s Gate, Battlefield Earth, and Christopher Columbus: The Discovery. For much of the 1990s, Kevin Costner had a stranglehold on the Titanic, with The Bodyguard, Waterworld, and The Postman all receiving nominations. And of course, the original Titanic was 1980’s Raise the Titanic!, a bloated, self-important Clive Cussler adaptation nominated for Worst Picture in the Razzies’ inaugural year. What do all these Titanics have in common? They all sank.

The Smurfs, on the other hand, is a Xanadu. Like the Olivia Newton-John-starring, roller skate-featuring, ELO-scored crapterpiece that gives this category its name — also a 1980 Worst Picture nominee, and by Razzie legend the partial inspiration for the awards — The Smurfs looks campy, stupid, and pathologically eager to please. Take, for example, the use of the all-purpose replacement word “Smurf.” In the original cartoon, as I recall, “Smurf” might replace a word like “great,” so that a Smurf eating smurfberries might say, “These taste so Smurfy!” In the film, though, “Smurf” seems mostly to serve as a bleep, so that in various trailers we’ve heard the following wince-inducing Smurfologisms:

“Oh my Smurf!”
“You Smurfed with the wrong girl!”
“Where the Smurf are we?”
“All right, who Smurfed?”
“I think I just Smurfed in my mouth.”

Anyway, all those scenes of Gargamel getting whacked or stabbed or walloped or laughed at by his cat, suggest this is gonna be a real hoot. It’s reminiscent of such Razzie favorites as The Cat in the Hat, Spice World, and Batman & Robin. And, of course, the original Xanadu, Xanadu.

So what kind of RazzieWatcher are you? Do you prefer Titanics or Xanadus? Do you take your shit served up straight, serious, big and dumb and handsome? Or do you prefer your shit silly, campy, and full of fart jokes and montages set to “I Feel Good”?

Put it another way: Is your favorite terrible food turkey jerky, or is it cotton candy? Answer that and you’re well on your way to picking a favorite for the week.

But whichever you choose, it’s not hard to get excited about both these films, and about Tinseltown’s gift to us, the humble movie viewers, of two such potentially moronic movie events. It’s a riches of embarrassment!

Like everyone on earth, I saw the trailer for Rise of the Planet of the Apes before the new Harry Potter movie. I guess I just don’t get it. Aren’t there only like 200,000 gorillas in the whole world? Even if they learn to fly helicopters, I feel like we could take ‘em.

Join us next week for another edition of RazzieWatch!

Dan Kois is a longtime Razzie guru and a frequent panelist on The McLaughlin Group.