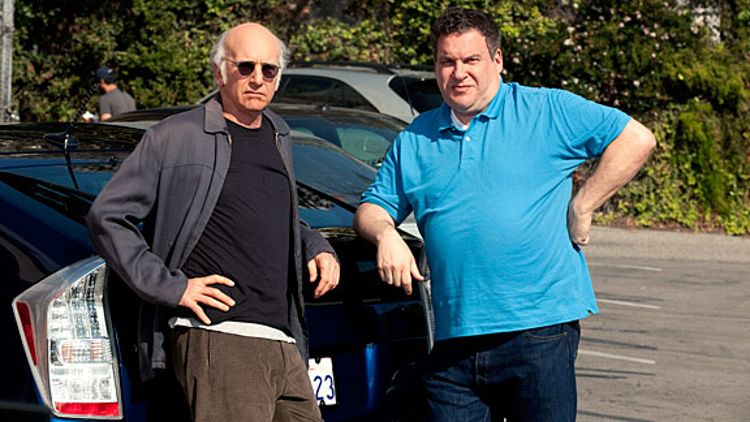 Predicament: When Louie has Jane and Lily, he tends to want to teach them some valuable lesson, and this time it’s in the form of a road trip. They’re driving to Pennsylvania to see his great aunt Ellen, who lives alone at age 97. He wants the girls to hear firsthand what life was like in a different age, before television, before cars, while there’s still the opportunity, which, of course triggers some brief mortality anxiety. Lily keeps chanting that she’s “Bored, bored, bored, bored,” and Louie’s incredulous — their brains have barely begun to develop, it’s a miracle they’re even alive, they haven’t earned the right to be bored. He does his part to keep things interesting by blasting and singing along to pretty much the entirety of “Who Are You?” — hey, if you’re gonna bust the budget clearing a music license, you might as well get your money’s worth. (Think the final omelet-making scene in Big Night: Once you realize you’re seeing the whole thing, the pace is weirdly engrossing and, in this case, hilarious, if only to see Louie experiencing the closest thing we’ll see to unbridled joy.)

Of course, the reality of hearing stories about life in a different age from a 97-year-old woman who lives alone becomes evident immediately. Aunt Ellen offers the girls a bowl of “nigger toes” and proceeds to marvel at how they can bring themselves to live in New York City, etc., etc., and Louie realizes, too late, that a different age is also a terrible age, and that his young daughters are more enlightened and open-minded than someone nearly a century old could ever be. And then Aunt Ellen drops dead in the kitchen. End of lesson.

Henpecking: Only from a small child, whose complaints are dispensed with quickly and decisively.

Insecurities about appearance, health: Actually is the opposite of insecure while rocking out, expensively, to the Who.
Career frustrations: None

Proclivities towards violence: It could be argued that Aunt Ellen wouldn’t have died that afternoon had he not come and bothered her, but this would barely even rate as involuntary manslaughter.

Xenophobia/racism: There’s the sidelong glance at the Muslim children at the gas station, but it’s really Aunt Ellen’s unflinching racism that makes Louie realize how much he’s been romanticizing the past. Yes, there are lessons to be learned from talking to old people, but they’re mostly of the what-not-to-do variety, and his own generally dyspeptic worldview seems rosy and measured by comparison.

Predicament: Plans for the big golf tournament at the club are jeopardized by Funkhauser’s puzzling disappearance from Saturday practice sessions — turns out he’s had a midlife conversion to orthodox Judaism, not at all like George Bluth in prison. (Caged Wisdom!) This would make him particularly predisposed to hate Larry and Jeff’s new obsession, Al-Abbas, the amazing Palestinan chicken place that’s also, controversially, opening a new branch in Westwood right next door to Goldblatt’s deli, turning the parking lot between the two shops into a veritable Gaza strip of angry take-out customers. (Theory: Based on the staff’s yellow t-shirts and the Styrofoam plates, this has to be a reference to L.A.’s Zankou, which is actually Armenian, but still good enough to make you forsake your entire heritage. If you live there and have never been, get thee to the otherwise awful intersection of Sunset and Normandie right now.)

Larry accidentally dings his teammate Ron’s new Lexus, but all is forgiven if he can get his wife to stop saying “LOL!” after people make jokes at dinner parties. Larry is now a social assassin, making the best of his own Asperger’s-like insensitivity to do others’ awkward bidding for them. It eventually backfires, despite this seeming like the job he’d been destined for his entire life, with everything unraveling on the 18th green, up four strokes. But not before Larry’s fight with Funhkauser in the Al-Abbas parking lot makes him a Palestinian hero, complete with carnal spoils that include the potential for a sister-threesome, if only he would continue to betray his friends and family. Pret-tay, pret-tay, pret-tay easy choice.

Henpecking: As if Susie wasn’t bad enough, now it’s all-grown-up Sammy blackmailing him and calling him a bald prick. Although as henpecking goes, the newly divorced Larry has it a lot better off than Jeff and poor Ron. Ell oh ell!

Insecurities about appearance, health: None; in fact, he’s walking around with the confident gait of a man who’s just had the Jew fucked out of him by a sexy Palestinian dame and who knows his penis doesn’t see race or color.

Proclivities towards violence: Social assassination is a largely bloodless trade.

Xenophobia/racism: Actually, it could be argued that Larry’s acceptance of Palestine, both into his bedroom and his upper intestine, exhibits an open-mindedness regarding geopolitical social tensions his friends don’t possess. Unless self-loathing can be considered a form of xenophobia…

Predicament: Still in shock from watching Gus murder Victor, and, presumably, from subsequently having to liquefy Victor’s blood-drenched corpse with hydrochloric acid, Walt buys a gun from Deadwood’s Ellsworth, who has no doubt learned the intricacies of small firearms from being the only true gentleman in a lawless western mining town. Walt insists that the .38 snub is for self-defense only — which is true, sort of, in that he intends to kill a guy who will probably intend to kill him at some undetermined point in the future. Pre-emptive self-defense, as it were. Walt thinks he has it in himself to walk up to Gus and shoot him point blank in his own home, but Mike intervenes in his own grizzled henchman-y way, which includes beating the shit out of Walt in a bar.

Jesse is dealing with the trauma in simpler, if no less self-destructive ways, yanking Badger and Skinny Pete off the wagon for a hellacious bender that includes drugs, beer, giant subwoofers, unsliced pizzas, and a lot of cracked-out extras in Ed Hardy t-shirts.

Insecurities about appearance, health: None; in fact, the show hasn’t really addressed that Walt is now bald by choice, voluntarily adopting the clean pate and bushy goatee look favored on, say, Oz.

Career frustrations: He has a tough, uncompromising boss who won’t help him realize his potential for growth within the company, and who also could murder him at any moment.

Proclivities towards violence: Self-defense, my butt!

Xenophobia/racism: None; the fact that Gus is black has nothing to do with why Walt wanted to shoot him dead in his home, although the media would have likely thought differently.

This week’s most powerless: Walter White

By an uncomfortably large margin. He’s one pocket protector away from being Michael Douglas in Falling Down.

Bjork and Michel Gondry Reunite on the Moon