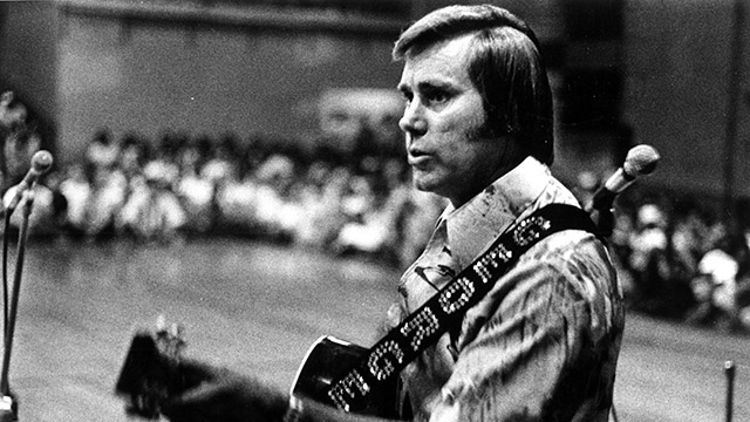 George Jones died today inside a hospital in Nashville. His exit from the world was not uncommon for an 81-year-old man: He was sick — with a fever and irregular blood pressure, reports the New York Times — he got himself checked out, he spent eight days in a reclining bed, and then he was dead. And yet it was out of character for George Jones, in the sense that George Jones didn’t seem capable of being dead until the minute he was. Jones loved, lost, fought, clawed, cried, cared, drank, snorted, and, most important, sang like a man who was above the law, even the laws of nature. Life is supposed to be fragile but George Jones’s life was not fragile; he treated his nervous system like a gorilla treats luggage. No amount of pounding could ever completely bust up George Jones’s life; no death-defying close call seemed capable of preventing him from continuing to pound. It would be a mistake to call him a victim of excess because he was neither a victim nor excessive; he just had a much, much higher tolerance than the rest of us. George Jones was always game. When it came to rehab or marriage, he often failed and was always willing to give it another whirl. (His longest marriage out of four attempts, to Nancy Sepulvado, lasted the final 30 years of his life.) And, in spite of a truly monstrous dark side, people kept giving “No Show Jones” second (and third and fourth and so on) chances too. And now, against all odds, he’s found peace.

A lot of people will now pay tribute to Jones, possessor of perhaps the single greatest voice in the history of country music. I won’t attempt to match the eloquence of his staunchest admirers. Instead, I’ll just point you toward this Robert Christgau essay and implore you to read it, especially if you’re unfamiliar with his music. Plenty of postmortems will also dish some truly spectacular dirt from Jones’s epically debauched life. I’m not going to do that either, though, again, I encourage anyone to read about the exploits of George Jones and experience the same mix of wonderment, shame, and traces of elicit glee that he himself must have felt while surveying the spectacular wreckage of broken whiskey bottles and absconded lawn mowers left strewn his wake.

I’m not the biggest George Jones expert in the world. My knowledge of his music doesn’t extend far beyond the 1982 album Anniversary, which compiles his best material from the previous decade in partnership with the great Nashville producer Billy Sherrill. (An obstacle in finding an entry point into Jones’s discography is the lack of a defining album or all-encompassing retrospective. Jones lived the life of 10 men and approximately 87 greatest-hits compilations. But Anniversary isn’t a bad place to start.) I loved George Jones the way you love Sinatra or Miles Davis or Abraham Lincoln or oxygen — his greatness is so vast and hardwired into our culture that you simply breathe it in without thinking about it.

I just want to say that I’m among the millions of people whom George Jones shepherded though more than one romantic disaster. Jones had the unique ability to communicate authentic sorrow and depression while at the same time elevating those feelings toward something grander and more majestic. I listened to George Jones when I was sad because he made my sadness seem meaningful, even beautiful, and presented the seductive illusion that what I was feeling could maybe be as important as what he was singing. On songs like “The Grand Tour,” it almost sounds like he’s weeping in tune, though his honeyed baritone ensured that he never sounded less than masculine. He was stoic and vulnerable, resolved and compromised, composed and verging on full-blown emotional collapse. Listening to George Jones unpack his mistakes and shortcomings was a distraction from your own mistakes and shortcomings; here is a man who is just as pathetic as you are in your worst moments, and yet you’ll never be as un-pathetic in those times as he was.

So George Jones is gone, if you choose to believe it. As for me, I’m still buying tickets if another George Jones concert is announced tomorrow. And I’ll wait patiently in my seat until someone announces from the stage that he’s not showing up.