Q&A: ‘The Honorable Woman’ Creator Hugo Blick on Maggie Gyllenhaal, the Middle East As a Stage, and Longform Televison 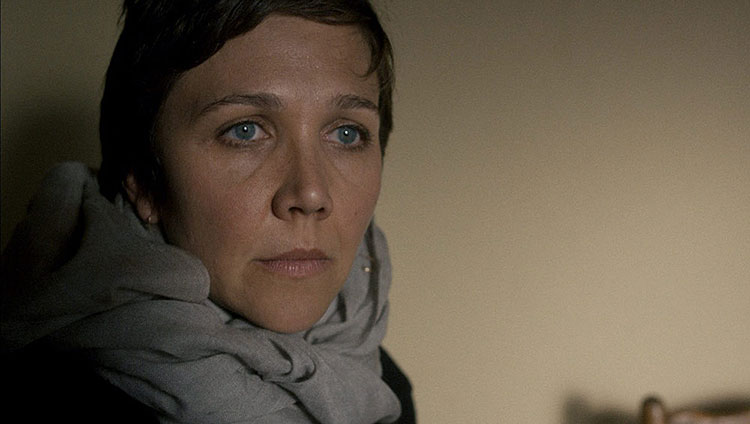 Tonight, one of the great television shows of 2014 comes to its conclusion. The Honorable Woman, a coproduction of the BBC and SundanceTV, is simultaneously a cloak-and-dagger thriller, a rumination on the destructive power of secrecy, a searing family drama, an unflinching look at the Middle East, and a story about a woman, Nessa Stein (played by Maggie Gyllenhaal in a career-defining performance), on the verge of either a nervous breakdown or saving the world, or both … or neither. It’s hard to tell.

Most of all, it is the work of a singular creative mind, Hugo Blick. A veteran of British television, Blick doesn’t have the name recognition of a David Chase, Matthew Weiner, or David Simon, but perhaps he should. In 2011, he wrote, produced, and directed the seven-episode London noir, The Shadow Line. Featuring stunning performances from Chiwetel Ejiofor, Christopher Eccleston, Stephen Rea, and Rafe Spall, The Shadow Line told a mystery — involving government agents, amnesiac cops, and seedy gangsters — that would require a chart that looked like an London underground map to explain.1 You can call what he makes a miniseries or longform television. Call it whatever you want, just do whatever you have to do to watch it.

You should watch The Honorable Woman, too. I really can’t stress this enough. Watch this show.

I spoke with Blick this week, as the series wraps up its U.S. run, about the ideas underneath the globe-trotting, gunfire, and gorgeous clothes; Gyllenhaal’s performance; and the infinite possibilities found in this limited-series format.

You did an interview with the Guardian around the time of The Shadow Line where you said, “If there is one thing I constantly revisit, it’s isolation. And how obsession becomes about heroism and how questionable that heroism can be.” It seems like you could very easily be talking about The Honorable Woman.

In order to be the hyphenate of three distinct roles, the thing that I need to begin the story, in my mind, and complete it, at the other end of what can take up to two and a half years, is, essentially, one line.

Click here for all of our interviews with fascinating people from the worlds of sports and pop culture.
Like a weird Buddhist experience, I have to really think about that for a long, long time, and distill why I’m going to apply myself, before I’ve even written a page. What in this world — it could be infinite — what’s the finite possibility to the exploration? And then, that’s how I go into [the BBC] commissioners. I go to meet them and say, “It’s essentially about this.”

The essential line was about a woman who was going to take a position on the world stage, for the future reconciliation, when she had yet to find it within herself, and the disconnect between those two aspirations because of those two elements. It’s often found in politics — I won’t mention names, but one might mention Tony Blair — the amazing nature of someone who’s willing to stand forward and say, “I think the direction of our lives and of our civilization is in this way,” when in fact, when you scrutinize them as individuals, there seems to be a huge vacuum in their personality.

It’s often that very disconnect that propels them to take public-stage positions. That is what was really the start of it.

And as a frequent visitor to Israel and Jerusalem, I’ve always been struck by the fact that it’s so quartered. It’s like a schism personality — the Jewish section, the Muslim section, the Christian section.

I was really interested in a schism personality. So those two elements came together in Nessa Stein, and that was the application to the whole thing. So in any small moment within that story when Nessa Stein was present, are we analyzing that essential vacuum or tension without that personality? And that’s what kicked it off.

You said you almost need a Buddhist repose when you’re coming up with these ideas. As the creative process went on, how much were you pulling from the news?

The research for this has been a lifelong issue. I was in Hebron about 18 months ago, which is in the West Bank and has a lot of tension between the Palestinians and the settlement there of Israelis.

At that time, it was relatively peaceful. And in the West, I think we’d forgotten the ongoing conflict in Israel and Palestine. And yet, when you’re there, you know it’s just a volcano that can burst back out at some time. You can never tell when that is. But the creator of the story, you have to be sure that what you created has the backbone of research, and hopefully authority, of what you’re trying to explore, and also what you’re not going to explore — that it can continue to hold its voice and contribute positively to the experience of trying to find reconciliation in the region, so that it doesn’t feel glib and facile.

One of my favorites episodes is “The Ribbon Cutter” [Episode 4]. It felt different than almost any flashback episode I had ever seen before. A lot of flashback episodes are the same characters, but with more hair.

There were two elements we were working with through Episode 3. There was this methodical, almost glacial, pacing, which was entirely intentional, because I wanted to examine, subliminally, a woman in shock. She had all the paraphernalia of establishment and protection, and we slowly kind of ripped that away, and she isn’t doing anything about it because she’s hiding this secret.

I really burned through the episodes. It was like watching 24 when it first came on DVD.

I understand the sentiment. I think it’s very different, isn’t it? Someone said to me, “Why’d you shoot it like that?” Well, because I didn’t want to shoot it like everything else. As 24 was when it kicked off, it didn’t look like anything else.

In, Episode 4 [of The Honorable Woman], BANG. We just completely changed the gear, revealed what the cause of her shock is, and removed the element of the thriller, and really focused on the psychology. We slightly changed the way the camera moved, so it didn’t feel quite so sincere and still. It was handheld, with a little more movement, a little less security as well. It just felt more kind of alive.

I think it’s one of my favorite episodes, because of the surprise, and the quantum gear change in the project.

Maggie’s performance completely changed too. Seeing where she came from made what happened to her all the more heartbreaking.

Absolutely. You see so much more of the attractive idealism, the spontaneous idealism, rather than the considered political idealism that we’d been joined with. There’s a useful, almost immature, juvenile quality to her character, which makes her incredibly empathetic in Episode 4.

It’s a very different relationship you have with Nessa Stein at the end of Episode 4, then you have with the previous three. And that’s what a longform story should do. It shouldn’t be a constant understanding of one character. She’s all these many elements, and we start to explore them in depth.

Do you conceive of these series as eight episodes?

No, they evolved along with the story. I have a certain kind of discipline — it has to hit 59 minutes, whatever length it’s going to be.

That makes it a very particular kind of pacing, because the story is told at the pace of the script, as it were, and the pace of the performance. It’s sort of considered, and thought through, at the blueprint stage, so that by the time it arrives on your screen, it is at the pace it is written. It isn’t reinvented in the edit. It’s kind of a fine alchemy behind me and the lead actor, whoever that lead actor is, within the scene.

Maggie’s role was so present. It was very, very intimate alchemy between she and I, in the pursuit of that character. I dare say what’s amazing is that we both agreed that what was great about our pursuit of that character — whether others share that viewpoint, we can’t be sure — was that Nessa Stein was slightly better than us both. We both noted that.

How much did the character change when Maggie came onboard?

It’s interesting — I never write for an actor. With Shadow Line and The Honorable Woman, I didn’t write for the actors. I wrote for the characters, and their psychological pursuits, and my interest in them.

When Maggie and I met, strangely, we didn’t talk that much about Nessa Stein, because we didn’t really know who she was. But, as we kind of worked each other out, what I got was really interesting, syncopated rhythm of her, and her interests, that I thought, Oh, I can see Nessa Stein becoming the character of that page, that could be traveled through the performances of Maggie Gyllenhaal. And it’s strange — when you cast such an important piece like that, you can’t really be sure that that’s true or that it’s going to work until they walk onto your set.

I knew in nanoseconds when she opened the door on the set that it was going to work. It was just this meaningful movement. And the way in which she worked really intimately, uniquely with Ed Gibbon, the costume designer, and they constructed the clothing for Nessa, and it was spot-on.

I really love the way you’ve used Stephen Rea over the years. He plays this ominous character in The Shadow Line, and something quite different here.

We talked quite a while, going, “You think this is right for you?” We really considered his kind of character as the aristocratic Irish past. That was really helpful to nailing it. One character says, “Ireland, now there’s a conflict.” And then he says, “Well perhaps that’s why they gave me the Middle East.”

I was curious about what you have planned next. I know you said it takes two and a half years, from idea to finished product. Are you starting to kick something else around?

I’ve got a couple of ideas that will sort of percolate around, and then one will land. It has to be something that you have to want to scratch, or an itch that will remain, for that length of time. Because you pass it between the disciplines of writing, directing, and producing, then it’s really got to engage you.

This is a coproduction with Sundance, and I was wondering if you’d ever thought about setting your work in the States or working in the American television system, especially since it’s starting to mirror the British one.

Yeah, for sure. I think my next project, because I have very good relationships with the BBC, probably will start there, and then grow as I continue to make relationships. Very possibly with Sundance, who have been brilliant. What you want when you have a creative relationship, as I’ve had with Sundance, is you absolutely want creative contributions. You do not want people just to say whatever you want.

This was really successful, and I look forward to doing that again. And also, with other contributing partners in the future, because I think longform drama … we’re doing stuff that we really weren’t doing, in the U.K. or the U.S., five years ago. This kind of series, where we sort of complete it as a single story, that kind of don’t wink at the audience too much. They say, “Look, this is the story. Stay on this journey with us and we’ll give you something complete. Hopefully by the end of it, you’ll have some kind of profound experience of the episodic nature of storytelling that will really make you feel satisfied by having that experience.”