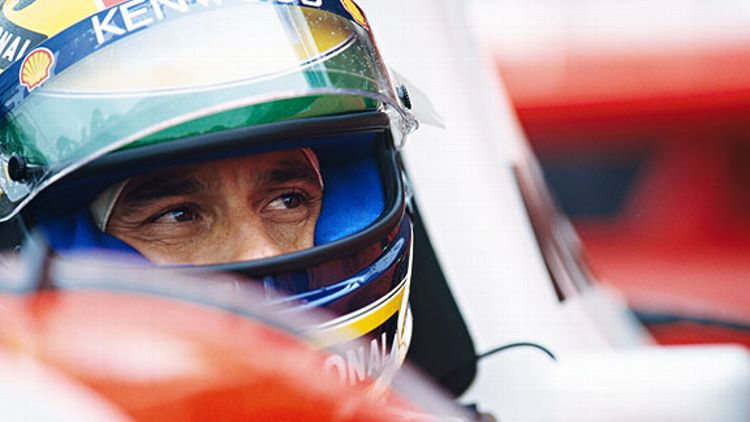 Arriving in theaters in New York and Los Angeles today is Senna, the award-winning, Grantland-approved documentary from director Asif Kapadia about the life and tragic end of Brazilian Formula One champion Ayrton Senna. Impressively cobbled together from a mountain of archival video, Senna (being distributed by ESPN Films, among others) forgoes the standard talking-head interviews and voice-over narration and lets the charismatic racing icon tell his own story, in news clips, home movies, and in-car footage. We spoke with Kapadia about the film.

Most Americans have probably never heard of Ayrton Senna. Does his unfamiliarity make this movie a tougher sell here?
Anywhere else in the world, everyone knows who this guy is. Latin America, Canada — everyone knows who he is. Central America, Europe, Asia — they all know who he is. But not in the U.S. But the less people know, the better — then you don’t know where the story is going. So my challenge to journalist is, “Can you write something about the movie without giving away the ending?”

Are you really worried about spoilers? It doesn’t seem like knowing how the film would really rob it of any suspense. Plus, his final crash is right in the trailer.
There are very few places in the world where you can go and say his name and people don’t say, “Oh, yeah, Senna — he’s the guy who died.” But when people don’t know, seeing the movie is a more interesting experience. The first time we showed it in the U.S. was at Sundance and most of the people didn’t know a thing about him. I could sense a vibe in the room — when he was winning, and during some of the funnier moments, they were just falling in love with the guy. Then when it came to the final act, it made it that much more emotional. When I go to the cinema, I try to avoid reviews. I don’t look at trailers.

You’d never made a documentary before, only dramas. How did you become involved with Senna?

Click here for all of our interviews with fascinating people from the worlds of sports and pop culture.
I remember the Senna era, watching that rivalry, watching the final race live. But I wasn’t an authority, so I started to research on YouTube. The more I looked, the more I thought that this film could be really special. In the past, people like Ridley Scott, Michael Mann, and Oliver Stone have tried to make films about Senna, but they all failed. Antonio Banderas really wanted to play him. But for one reason or another, thank God, it never came together. This time, there was a producer, James Gay-Rees, who had the idea, and he approached a company called Working Title, who makes all of those romantic comedies. They’d never made a documentary before. And the executive producer and writer of the film, Manish Pandey, is a surgeon. He never made a film before. James and Manish went to meet the Senna family in Brazil and pitched to them and got permission to make the movie. Then they met with directors. Luckily for me, everyone else passed or they were busy.

There are no talking-head interviews in Senna and the film is pretty much narrated by Ayrton himself. How did you get access to enough footage to do that, and how long did it take to cut it all together?
From the idea stage until now it’s been seven years. I came aboard in 2006 and started editing in 2007, and we were cutting for three years. We had amazing researchers in Sao Paolo, Rio, Paris, Rome, and Japan, plus we had exclusive access to [Formula One Management president] Bernie Ecclestone’s archives in London. No one’s ever been in there before. We had all the behind-the-scenes and in-car driving footage. And we had home movies the family had never let anyone see. I had this gut feeling that we could make this film without any contemporary interviews telling us what to think — we can show everything. And Senna speaks so eloquently that there was no reason to have someone else make up a reasoning for what he was doing.

In sorting through the footage, did you learn anything about Senna that surprised you?
We did our homework and a lot of the stories that we read were not necessarily what happened. Senna had a negative perception in Europe. A lot of journalists did not like him, mainly for the accidents that happened between him and Alain Prost. Senna drove into Prost at 160 miles per hour — he could’ve killed him, he could’ve killed himself, the car could’ve flown into the crowd. In the film we ask, “Why the hell would anyone do that?” We tracked back and showed the motivations behind it. You realize Senna got screwed the year before. He should’ve had the chance to win the world title, but somehow he got disqualified when Prost drove into him. Senna got the ban and the fine.

For you, how different was this from shooting a fictional film?
It was a weird thing where we had to get our facts right. There was just no room for cheating. I couldn’t take a shot from 1988 and put it in 1990. If I did, everyone would know. Even if I showed clips where he drives with a little bit of green inside his helmet #&8212; everyone would have known that he only had green in his helmet in 1990. It would have been on the Internet — Asif must be an idiot putting a 1990 helmet in 1988.

With this film, I almost felt like we were trying to create a new film genre. When you say to somebody you’re making a film about Senna, they say, “Oh, great. Who’s playing him?” “No one.” “Oh, it’s a documentary?” “Well, not really.” “Who have you interviewed?” “Nobody.” “Well, what is it, then?” “I don’t know.” I don’t know how many people you could make films like this about. This guy was a genius and had cameras following him everywhere, before public relations kicked in. When he was behind the scenes, arguing about safety, there was a camera. And he just said what he thought. He didn’t care — he was a man’s man. We had his entire career on camera, and, tragically, his death. That’s why we were able to make the film we did.

Previously: A Man of God: The Sports Documentary of the Year and Strange Death of Ayrton Senna

Jonathan Demme to Save JFK