Q&A: Now You See Me’s Jesse Eisenberg on Knowing the Secrets of Magic, Working With Michael Caine, and Having to Treat Your Idols Badly 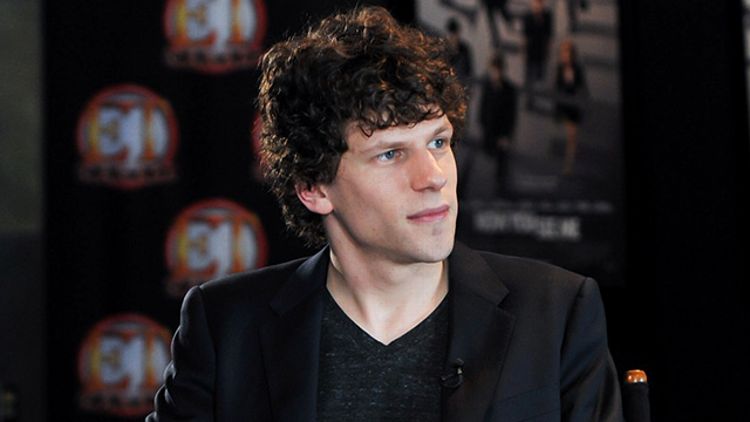 I’m in a cinematic moral quandary this weekend. I want to support non-franchise-based summer blockbusters so that studios might eventually one day permit a trickle of original stories between May and August. But just looking at After Earth’s bad–Kriss Kross–album cover billboards makes me long for the safety of a generic, brainless summer sequel. Seriously, all I want is empty escapism, not Will Smith’s $100 million CGI’d home movies. Fortunately, Now You See Me (whose ad campaign probably can’t compete with the glare from M. Night Shyamalan’s ego) offers an alternative. It’s got Mark Ruffalo, Morgan Freeman, Jesse Eisenberg. and magic!

It’s also a great opportunity to catch up with Jesse Eisenberg, who is responsible for countless smart-ass students telling their English teachers, “You have part of my attention, the minimum amount.” Eisenberg’s an unlikely icon — a neurotic, sardonic leading man just as comfortable in action comedies like Zombieland as he is in slick critiques of a generation. (The Social Network.) Seriously, whenever turn-of-the-21st-century nostalgia hits its stride, Jesse Eisenberg movie marathons will be a thing. Until then, read on to find out that, yes, Jesse knows how they do all the magic tricks in the movie, and ones that aren’t — he just isn’t telling.

It’s great to talk to you again. Last time we talked, it was about this little, under-the-radar movie, The Social Network.

Yeah, I remember. It wasn’t that long ago.

Well, magic brings us back together. But let’s talk about Now You See Me. The first thing I noticed: your new hairstyle. How long did that take every day?

Click here for all of our interviews with fascinating people from the worlds of sports and pop culture.
No time, they just did it at the beginning and it stayed like that. The idea with the characters was that they were magicians of the future, but only five years in the future. Doing stuff that people are working on now but haven’t actually performed yet. So the director was trying to create a kind of a more heightened style.

So that could be your hair five years in the future?

Hah. Well, for the role. Yeah.

I imagine you talked to a lot of magicians to prep for the role.

The main guy I worked with is David Kwong, who is more of a cerebral magician, instead of flashy. He taught me a lot of sleight-of-hand magic, which is my character’s expertise. I had a month before we started shooting to learn as much as I could. Then I also studied David Blaine. And David Copperfield is flashy, like my character. So I picked and chose what I thought would be appropriate for my role.

So you combined gritty street magician with super-flashy David Copperfield?

Yeah, that’s it. My magician starts out as a street magician in Chicago and then gets recruited for this team of magicians where they’re performing in these big arenas and doing much more elaborate illusions.

This is a little random, but I actually know David Kwong. Great magician. Did he take you to the Magic Castle to prep?

No! I’ve never been there.

Get him to take you there. It’s incredible. They have this room specifically for sleight-of-hand magic. It’s mind-blowing.

Yeah, [David] taught me a lot of sleight-of-hand magic. And more interestingly, he taught me how my character does some of the bigger illusions that I do. I feel like once you know the 10 basic principles of magic, you can extrapolate how the bigger things are done. So I learned those principles and the kind of skills and rules behind most of the general illusions.

So, basically, this role ruined every magic show for you ever?

Yes, but I think the really impressive part of magic is the discipline it takes, and the skill that it takes to pull off some of these illusions. Just knowing how something is done is 2 percent of the equation. The main skill is really practicing it every day, perfecting the smallest flick of the wrist and snap of the finger and creating the persona. You’re supposed to mask the big trick with the small moves. You create a presence where you can do things that are kind of disguised.

Anything you can reveal, or are you now unofficially part of the brotherhood of magicians and they’d put a hit out on you for talking?

Well, the thing is, even if you know how something is done, you can’t do it yourself. I know how a lot of the tricks are done, but I can’t do them. I only had a few months to crack these tricks that require decades of practice.

Fortunately for the film, you guys have editing and camera cuts.

Exactly. There’s one scene, for example, where I’m being interrogated, and I’m handcuffed to a table and shuffling through a deck of cards. To me that was actually the most impressive thing my character could do. That was actually these twin brothers named Dan and Dave Buck. They did the card-shuffling and then we just superimposed their hands on mine.

Wait, I thought that was just CGI cards. Where you shoot the cards from one hand all the way to the other?

Wow, I literally thought that was CGI! That might be the most impressive thing about the movie — I mean, I liked the movie, I’m not being sarcastic. But I swear I thought that was just CGI cards in a computer.

No, it was the most impressive part of it to me, too. The fact that it’s actually done live by people.

Seriously check out the Magic Castle’s close-up room. I swear I saw a guy pull a Costco-sized jar of peanut butter from a flattened brown lunch bag, like 4 feet in front of me. You don’t know how he did that, do you?

I know how to do some of that, but I’d have to see the whole context.

Speaking of magic, how was acting with Michael Caine?

Someone once told me he has a very wry, British, working-class wit.

I guess so. I can’t pinpoint the ethnological origins of his wit.

Maybe they just meant he was fun to have a beer with.

Well, he’s playing a character in this movie who’s a corrupt businessman, and it’s a character that my role thinks is just kind of a vacuous rich guy. So it was fun to interact with him in that way because, of course, I have such reverence to him as an actor, but in the scenes I treat him terribly.

Is that tough as an actor? To work with your idol but have to be a dick to him?

I mean, it’s part of the job, and you just get used to it after awhile. I just finished a play with Vanessa Redgrave and it was kind of a similar thing because my character treats her terribly. Usually after the first or second rehearsal you feel comfortable doing that. The only inappropriate thing would be not doing it.

I hear you’re in the new Richard Ayoade film The Double.

Actually that’s the one that Michael Caine was a producer on. It ended last year, and they just finished editing it last week I think.

I loved Submarine and we actually interviewed Richard for The Watch.

He’s great, hysterical and a really talented guy. The movie takes place in this fictional dystopia, so he created this entire world. They built every room, selected every prop, even ones way in the background. It was a very specific aesthetic.

It’s based on a Dostoevsky novel, right?

Loosely. Emotionally, it’s similar in terms of the dark humor and paranoia, but the world it takes places in is this kind of odd creative utopia.

Loosely as in O Brother, Where Art Thou? was loosely based on The Odyssey?

Oh, no. It’s not like an ironic commentary or referencing it in cute ways. The world that it takes place in is just cosmetically different, and it doesn’t adhere to the structure of the book.

It must have been a nice change of pace coming off a big, car-chase-ridden summer blockbuster.

Well, I didn’t do much of that stuff. But the director [Louis Leterrier] was really incredible. He’d work 14 hours a day with the actors, then do these car-chase scenes and come back at 6 a.m. to do the main-unit stuff again.

I liked how the movie was this mix of action and brain teaser — screwball repartee, then suddenly, parkour and explosions. Oddly French.

Well, the director is French. He has a unique sensibility for a movie like this, which is otherwise a very complicated plot and [a] stylized movie.

I see you’re writing these days. I’ve seen your stuff in the New Yorker.

Yeah. And I wrote an article for Slam magazine … about my family and us using the NBA League pass — you know, where you can watch all the games. I’ve been writing or a long time but the fact that things are getting published now is just by virtue of continuing to plug away at something. Just like anything else you have to keep submitting to the New Yorker before they accept you or keep submitting to theater companies until they decide to produce your plays. And like anybody else it just takes a long time. So things are now kind of opening up for me, but I’ve been writing since I was young.
This interview has been edited and condensed.