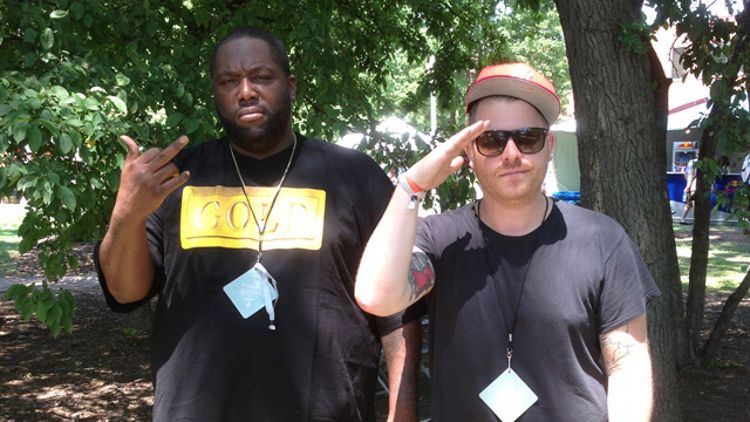 Backstage at the Pitchfork Music Festival, El-P is introducing Killer Mike to Yo La Tengo bassist James McNew. “He lives in Brooklyn. That’s how we know each other,” El-P explains. “Former neighbors. Now bitter enemies,” McNew chimes in. Mike takes the bait: “That’s how it goes. I’m on your side if we fight him.”

El-P: “That’s cause you’re a bully. You’re a fucking bully.”

Next, the two are greeted by some reps from Goose Island Beer Co., who’ve made a special brew — Run the Jewels, named after the duo’s damn-near-perfect team-up from this year — to pour at the festival. “They asked us what we wanted,” El-P explains. “We said high-alcohol-content weed flavor.” “The hotter it gets, the more familiar the smell will become,” Mike adds. Finally, we settle down on a shaded picnic table to actually do this interview. Someone’s left a giant pile of cheapo promo sunglasses on the table, though, and Mike can’t resist one more dig: “Jamie, you want some new shades? My gift. I love you, my brother. Take as many as you want.”

I know it’s early and hot, but, seeing as you guys have pretty much always been politically outspoken, I wanted to ask about the NSA scandal and the Snowden leaks. Were you surprised by the …

Click here for all of our interviews with fascinating people from the worlds of sports and pop culture.
El-P: Not that it’s not important. It’s just amazing to see everybody else start to realize the obvious truths. It is what it is, man. I feel like anybody who’s aware has a very accurate oncoming sense of doom. [But] it’s interesting to see the rest of the population get definitive proof that I’m not crazy. The thing for me is I’m not tolerating any accusations of paranoia anymore.

Have you had conversations with fans that have become more politically aware by listening to you guys talk?

El-P: I’m not a political activist … Mike is more than that …

El-P: I’m just a dude who talks about shit in his records because it’s a part of my life. And it’s been that way since the Clinton era. I’ve been talking this shit since everything was supposedly great. I think the veil is either there or not. If you get it pulled away at an early age, you can’t unsee certain things. That happened for me, and it just coincided with when I started making music professionally. I had already formed those ideas. But I don’t know, man. I think there’s not much that me or Mike is gonna say that [the fans can’t hear already].

Killer Mike: Yeah, I am, but I have to be by de facto. I don’t wanna be, but I’m a black male, and usually whatever totalitarian thing hits … whatever ground-level legal issue … it’s pretty much passed on us first because we represent a perceived lower class. I feel like all black males, we get frustrated sometimes … it feels strange, like El-P said, that my paranoia is validated. Stop-and-frisk validates my paranoia. Because it’s out in the open. We can finally say it’s been a policy. But stop-and-frisk is just the name of a policy that’s existed since my father was a police officer!

El-P: They just named it. They just gave it a name, and a marketing campaign.

Killer Mike: That’s why I have to be active. But I don’t wanna be. I just wanna smoke weed and make rap music.

El-P: The worst thing for the world is for [us] to be right in [our] perspectives. That’s the worst kind of shit you wanna be right about. The way that any of that stuff has made its way into my music — I don’t take a political perspective, I take a human perspective. I take the perspective of a dude trying to wake up and go from Point A to Point B and is basically, “I’m confused, I’m afraid, I’m stressed.” And so many times, I wish I could just enjoy some of the communal emotions. I wish I could get really excited when Obama was elected president because technically that was a great moment in American history. But unfortunately, I already have my perspective on what it takes to become a president in the first place.

What about you, Mike?

Killer Mike: It had to be a source of pride and happiness for me because I’m a black man and I needed a certain ceiling to be taken off. It was always taught to us, “You’ll never be president …” Well, now that we’ve gotten past that bullshit! But being a president of a corporation, when the agenda is already decided by “planners,” the same planners that were in the Reagan administration, or are in more powerful positions now in the private sector … so I know the grand scheme, and in the grand scheme I’m right there with Jamie. But just from a racial standpoint, it was a good moment for African American males in terms of removing mental barriers. But from a political standpoint — a n—- know [nothing] changed!

M.I.A., who’s also playing later today, caught a ton of flak on her last album for what was perceived as undeveloped political opinions. What’d you make of that whole process? Why do you think that happened?

El-P: ‘Cause people are assholes! I hated what they did to M.I.A. when she dropped that record. Anybody who’s sticking her chest out and trying to say something, especially when they got the opportunity to communicate on a mass level … it’s more than most motherfuckers will do.

Killer Mike: People not gonna love you for waking them up to the truth. You gotta be prepared for people to hate you … That’s why it’s important for me in my music to represent all of me. Not just both sides — I’m not split down the middle. I like freedom and I like absence of government in my life because I like drugs, and I like strip clubs, and I like guns, and I like shit like that. And I don’t want you in my life. I am here by accident because two teenagers made love in this country, but God put me on this earth. You don’t own me. I have inalienable rights to live my life as I see fit. And that’s what this shit is about.

Sometimes when music and politics cross over, you feel like you’re getting the newspaper headlines sung back at you …

El-P: No one likes to be spoken down to, no matter what the message. I’m too self-aware and too fucked up to ever lecture anyone. All I can ever do is relate to you my insanity … My perspective … I hate my perspective. My perspective is a drain on me psychologically. I’m sensitive to the stress and the insanity that a lot of people don’t tune in to. That’s why I make music, I think. That’s the valve. I can walk around and joke with Mike and chill and be a person, because I can make records where the insane voice in me gets a chance to speak. And if I weren’t making those records, the world would be a more dangerous place. Because I’d be naked, with a brick, in the street. Shouting at children.

I heard a debunked rumor that the Obama daughters were maybe going to come through. If they had, would there be any message you’d want them to send their dad?

El-P: I don’t give a shit. No message. They’re chilling. They don’t need a message.

Killer Mike: I hope you enjoy the music. Tell your dad “Hey.”

El-P: Have a great life. Grow up to be great.

Killer Mike: They’re little girls. I don’t want people fucking with my daughters. My daughters’ dad says crazy wacked-out shit, and the little boys in their school seem to love it. But the teachers aren’t always thrilled about it. I just hope that they get to be shining examples of what black women can be, like their mother and their grandmother before them. My people, we’re just in need. And I would hope if they come out, they just have a good time, and they never get caught fucked up like the Bush girls. [Laughs.] I’m out!

The Kardashiad, Part 19: Whales Are Disgusting