Q&A: Inside Llewyn Davis’s Oscar Isaac on the Coen Brothers, Working with Your Idols, and Laughing Through the Darkness 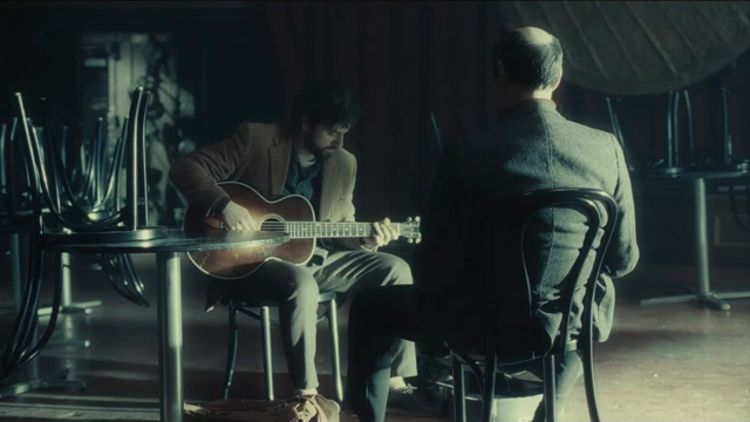 Oscar Isaac may be the luckiest actor in Hollywood right now — and he knows it. After breakout roles in Robin Hood and Drive, he’s double-stepped it up the escalator of success and now finds himself headlining Inside Llewyn Davis, the latest film by a couple of his heroes, the Coen brothers. Of course, it also helps that Isaac is precociously talented. Not only can the Juilliard graduate turn from flamboyant royal villain to dimwitted ex-con on a dime, he’s also an accomplished musician, which happens to be how he got the gig. Isaac plays the titular hero, a kind-of-but-not-really riff on Dave Van Ronk who stumbles Job-like through the Greenwich Village folk revival of the ’60s, desperately clinging to his artistic pride, his ambitions, and a cat, all while looking for the next place to sleep. It’s surprisingly soulful, ruthlessly wry, and a worthy addition to the Coens’ playlist.

In fact, Inside Llewyn Davis has many remarkable features — despite losing none of the usual edge, it might be one of the Coens’ gentlest films yet — but paramount among them are the long, intimate takes of Isaac playing soulful folk songs. In contrast to the usual chopped-up manner of recording a musical performance for a film, Isaac actually sang his songs in toto over long takes; and unlike Russell Crowe in his much-maligned turn in Les Misérables, Isaac can hold his own against Justin Timberlake. No, seriously, check it out: It’s a handy skill to have as he’s sent into the fray of Oscar campaigns. Given that the Coens long ago switched from being perpetual outsiders to perennial Oscar favorites, it feels like Isaac’s got a shot at a (well-deserved) nomination. I talked to him as he embarked on his publicity rounds.

I need to confess: I’m a total Coens groupie, and I know you’re the same. What’s it like actually working with them?

It was exactly what you would fantasize it being if you’re as much a complete Coens geek as I am. The most beautiful version of being able to work with them — that’s what it was. More so! They were relaxed, so funny and quick to laugh and be inclusive. And when I say inclusive, I mean not just generous about the thing we were making. It was like, “This is our worldview. This is how we feel about life and art and music.” And also: “This is what working with Paul Newman was like, and this is what that person was like. This is what I think about directing; this is what we think about acting.” It was a fully immersive experience. One hundred percent.

So is it really true they’re like a two-headed-beast director — they finish each other’s thoughts, like some kind of super-wry hive-mind?

Click here for all of our interviews with fascinating people from the worlds of sports and pop culture.
They do finish each other’s thoughts; they are completely in sync. But it’s two beings. That’s what makes it so amazing, because it’s two people making the exact same movie — it’s two geniuses. It’s like doing a movie with John Ford and Billy Wilder, except they get along. That’s really what it’s like, these two incredible filmmakers making the exact same movie with the exact same tone, but bringing their own individual genius to it.

Speaking of their tone — that dark, twisted worldview that permeates all their films — I’m curious: Do they actually talk it through with you as an actor, or does it just kind of come about naturally?

It comes through naturally. When we talk about those things, it’s not so much about the big themes in terms of symbolic stuff. They’re actually very practical and pragmatic the way they talk about things. It’s more the things that they like, not necessarily what everything means.

There’s definitely a devilish playfulness to the bleak nihilism. [Just read Ethan’s poem “The Drunk Driver Has the Right Of Way.”] And they so got a kick out of axing poor Richard Jenkins in the head in Burn After Reading.

Wow, good job capturing the through line of every Coens film. Though this one has something new to it: Your character’s struggles are bleak, but there’s an affection I feel in the filmmaking. Did they tell you anything different, or did you guys come to different conclusions about him?

There were definitely never conclusions. Things are allowed to happen. They just magically take shape in a very organic way. I would say while we were making it, “Are we just making The Passion of the Folk Artist? You know? Is this a little extreme? Are we just torturing this guy?” And I would bring that up, and they would laugh. That would be about it. So it was — in my head, I did think about it and joke about it occasionally, but I agree, there’s an admiration of the character trying to be true to himself, even though shit’s going wrong and outside things are happening that are terrible. But a lot of internal things are happening that are terrible that he’s responsible for as well.

Still it feels, even if only slightly, like a kinder, gentle Coens film, though that’s not saying much.

I know what you’re saying. There is a gentleness. For me, it was important not to try to tip it one way too much. To not try to get sympathy, to try to use charm or use any of those kind of things, because I think it would have gone that way a little more. He’s someone that doesn’t judge anything that happens; he doesn’t have time to. He’s just trying to survive. If he’s coming across as an asshole, it’s like, “I’m not trying to, man. I’m just trying to fucking live.”

I’m going to remember that line next time I piss someone off.

I’ll try not to tip any emotional spoilers, but I love that last shot — the look on your face that almost dares the audience: “Yeah, I can take it. Can you?”

Yeah, it was an interesting one. I did a few different versions of that. And Joel particularly liked one where I laughed a little bit at the absurdity of what happened and, at the same time, there’s a recognition that “Yeah, I probably deserved that.” So we did talk about it. It’s not a moment of self-pity; it’s a moment of self-recognition. It’s about saying good-bye. The whole movie’s about saying good-bye. Every song is good-bye, so long —

Ha, yeah. It’s also a movie about someone dealing with grief.

Well, I don’t want to give away too much about the ending. Instead, let me ask about F. Murray Abraham. I bet it was a treat in its own right going mano a mano with Salieri.

It was huge. He’s such a formidable guy. I’d heard all sorts of different stories about him. And he shows up for one day of work, and he was so happy. And light-footed and just excited to be there. That’s what’s remarkable about their sets: Everybody is super excited to be there. Everyone that’s there is a Coens fan. So you can imagine, everyone’s really amped up, even someone like F. Murray Abraham. He was delighted to be there, joking around, and he really captured those kind of cultural gatekeepers.

I’m glad they can keep it light. For anyone who’s ever put themselves out there creatively, that scene with you and him is just brutal.

Before we finish, I have to highlight your singing. I hear the way you got the part was that you actually took lessons from someone who knew the real Dave Van Ronk [on whom the character is loosely based]?

That’s true. Before my audition for the Coens, I was in this tiny little movie and there happened to be this guy, an older gentlemen who was an extra — a drunk at the bar — and in between takes he picked up a guitar and started playing in exactly the style I was trying to learn for the movie. So I went over to him and said, “What’s your story, man? You’re amazing!” And he was like, “I’m from New York. I’ve been here a long time.” I said, “Well, I’m auditioning for this thing that’s kind of based on Dave Van Ronk. You know who that is?” And he says, “Yeah, I played with Dave.”

Yeah! And he was like, “Do you want guitar lessons?” I said, “Sure!” So he says, “Come to my place. I live on MacDougal Street above the old Gaslight.”

I know. He was saying, “I’ve been here since the ’60s.” And so I go up to his place, and he started playing these old records and he taught me how to Travis pick. This guy is someone that’s been there forever that’s been struggling as a musician — he’s also an actor — but he finds a way. And he finds people that he thinks are interesting and tries to teach them what he knows. I started playing with him in old cafés and coffee shops. His name is Eric Franzen. Yeah. It was pretty remarkable.

Dead Man's Curve: The Scene at Paul Walker's Crash Site and the Way We Mourn Now