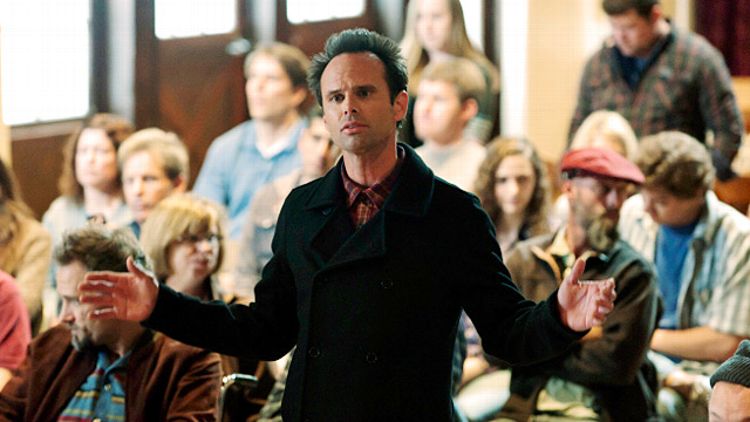 The episode starts with Art telling Raylan that, in the absence of any evidence that Quarles is in violation of federal law, Raylan needs to back off … which obviously means that the episode has to end with Raylan starting to close in on Quarles (on a tip from Boyd, whom Raylan gets out of jail as a favor to Ava). But getting there is a little complicated.

Limehouse doesn’t dally in showing Quarles who’s going to be directing the activities of their criminal conspiracy, matchmaking Quarles and the crooked moderator of the sheriff’s debate. Separately, Limehouse enlists his henchman, Errol, to ensure that Tanner cleans up all his loose ends — which means a visit to one Lemuel Briggs, who had worked with Tanner on the bomb Tanner planted in Napier’s car. But you don’t get to be an elderly explosives expert in Harlan without learning a few tricks, not that it’s so hard to put one over on Tanner. Briggs manipulates Tanner into stepping onto a platform to reach a bag of money … only to tell him that the platform is rigged with a land mine which, if the weight on it drops, will explode, killing all three men in the vicinity. Briggs offers to disarm it if Tanner and Errol hand over their weapons; Tanner starts to cooperate, but Errol kills Briggs instead. He convinces Tanner to give him the money to pass on to Tanner’s mother, on the theory that Tanner’s probably doomed anyway, and takes off. Left alone, Tanner calls the troopers, who call in Raylan, but before the ATF can disarm the land mine, the gun slips from Tanner’s sweaty hand, changing the weight on the platform suddenly enough to trigger an explosion, thus tying up all Limehouse’s loose ends …

“When the Guns Come Out”

… Or so it would seem. Errol does follow through on his promise to take care of Tanner’s mother, but when he drops off the money, he doesn’t see Raylan standing behind her. A transfer of cash from Limehouse’s henchman to the mother of Quarles’s henchman gets Raylan a little closer to connecting the season’s two Big Bads. But Raylan’s loyalty is, as always, to Harlan, and he visits Limehouse to give him a warning that a war is coming and vowing, of Quarles, “I’m either going to put him in prison or in the ground.”

Elsewhere, Delroy is using his drug-addicted prostitutes to rob banks, which may have seemed like a good idea until Crystal gets shot in the midst of a robbery. Delroy disposes of Crystal in a swamp; he then kills one of the prostitutes on the spot, but can’t stop Ella Mae before she escapes and subsequently turns up at Boyd’s bar. Ava looks after her until Johnny reminds her that Delroy pays them protection money, which means they have to return Ella Mae to him. Ava bristles but agrees that Johnny’s right, and that Boyd wouldn’t shelter Ella Mae; she calls Delroy to come get her, and to bring a $2,000 ransom. He does so, but just as it seems as though Ava’s handing over Ella Mae, she blows an enormous hole in him instead. When Boyd returns to the bar — after a triumphant performance at the sheriff candidates’ debate (more below) — she catches him up on the Ella Mae situation. Pointing out that Delroy’s demise has left a vacuum at the top of the trailer park brothel business, she suggests getting into whoring. Boyd reminds her that she hadn’t wanted him to do that, and she explains that she didn’t mean he should run women: Instead, she’s going to do it.

Just one episode since his joining forces with Limehouse, the marginalization of Quarles has already begun: No one will let him forget that he’s a carpetbagger, which means the less direct involvement he has with his marks, the more successful he’ll be. The debate moderator warns Quarles that Harlan voters are “pretty quick to spot a fix when they see one,” but that doesn’t seem to be true if the fix is coming from one of their own: Sprung from jail, Boyd heads for the debate and delivers passionate testimony against Napier, casting him as the embodiment of the company man. While Napier has tried to discredit his opponent, Shelby, by pointing out that he was fired from his last security job over a robbery in which Shelby was suspected as an inside man, Boyd turns it around as an attack on Napier by announcing that Shelby was fired by Black Pike. Now Napier is more of a liability to Quarles’s interests than ever.

Oh yeah: Raylan wasn’t lying when he told Wynn he kept the gun that killed Gary for insurance. It’s hidden under the window in Raylan’s crappy apartment.

MVP: Boyd! Not only was he released from police custody in record time, but his revival-preacher performance at the debate harks back to Mags Bennett’s fiery speech at the infamous Black Pike meeting last season. Napier reminds the crowd that, as a convicted felon, Boyd can’t vote, but given Boyd’s skills at swaying the crowd, his own inability to vote hardly seems to matter.

Hat Content: High. Raylan barely has occasion to take it off this week.

Raylan’s Love Interest Threat Level: Dangerous. When Ava seeks Raylan’s help in getting Boyd out of jail, she finds him day-drinking in the bar under his apartment, and he greets her with a big, sloppy kiss that seems to catch her off guard. But that’s not his only attack on Ava and Boyd’s relationship; he also needles, “You do know what Boyd is, right? I mean, you do know.” Raylan is surely still grieving his breakup with Winona, but this is potentially perilous territory for him.

State of Boyd Crowder’s Soul: Proud. Not only has he apparently swayed the sheriff’s election in his favor, but his moll has volunteered to expand into a new criminal enterprise, without his even having to do anything.

Villain of the Week: Limehouse. Raylan’s triage of the season’s two big threats means that he’s prioritized Quarles over Limehouse, telling Limehouse everything he knows about Quarles’s activities in an effort to turn Limehouse against him. But as the episode ends, not only is Limehouse unconcerned, but he further pushes his advantage over Raylan by bringing up Raylan’s late mother, the mere mention of whom puts Raylan on edge. It feels like Limehouse is holding back information about her in case he needs to deliver a knockout blow against Raylan in the future (by which I mean, at some point in the next four episodes).

Best Line: From Tanner’s mother, when Raylan tries to manipulate her into turning on Tanner by claiming worse men than Raylan are after him and that only Raylan’s intervention can keep him safe: “Look. The first time some no-dick lawman came around and ran that game with me, Tanner was 10 years old. Now you GET THE HELL OUT.” Raylan: “Yes, ma’am.”

Tara Ariano would never turn down a slice of Shoo Fly Pie.

Headphones, Kung Fu, and the Knicks: A Visit With RZA