Predicting the 10 Best Songs at Coachella 2012 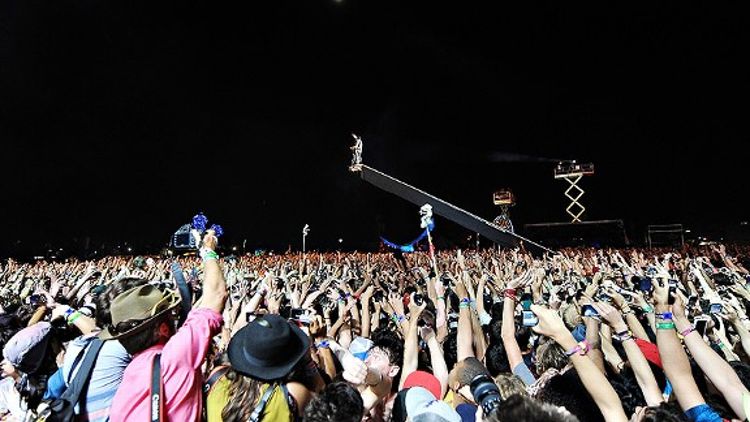 One of my low points last year was selling my Coachella tickets because I had finals. Actually, the real low point was watching Kanye West close out Coachella 2011 from my laptop in the fifth-floor stacks of the library. Alone. Yep, definitely much lower. You see, after attending the show in 2010 and having near-religious experiences during the sets of Jay-Z, Muse, Tiësto, Phoenix, and many others, I vowed to make the yearly hajj to Indio, California, to be a part of the love fest.

I messed up last year. After reading the lineup, announced yesterday, there is no way I will mess up in 2012. And neither should you. Part of the trick of the music festival is strategically planning how to see all of the artists on your fantasy playlist. This is a process that should not be taken lightly. The feeling of realizing your trip back to the campsite to switch out your blue bandanna for a red bandanna caused you to miss 90 percent of the Florence + the Machine set is a feeling no good person should ever experience. Trust me.

Based on the large variety of artists at the festival, you will be thoroughly entertained for three straight days. Most sets will be fun, a few will be underwhelming in the massive venue, and a select few will be perfect in the large, outdoor, desert setting that is Indio. Reading through the list, there are 10 acts that are must-sees for me, due to each having one song that will undoubtedly transport you to another place. The songs that, when asked about it the following week by a coworker, you will respond, “I can’t even remember, it was just beautiful.” Here they are, and I’ve thrown together a Spotify playlist for your listening enjoyment:

This whole set is going to be wild. Merrill Garbus, the woman responsible for the group’s unique sound, is a rock star. She throws in a number of drum loops, vocal samples, and instruments into her set, something that will sound pretty amazing in the outdoor setting. “Gangsta,” one of the standout tracks from 2011’s w h o k i l l, is loud, brash, extremely in your face, and in about 45 seconds will start one of the best dance parties of the three-day weekend.

The best rock band in the world should always play Coachella. Two years ago, when Muse and Phoenix were really coming into their own, watching them rock out with reckless abandon in Indio was pretty amazing. The Black Keys will be no different in 2012 and won’t disappoint as the Friday-night headliner. This whole set is a must-see, but “Howlin’ for You” will definitely be a moment to remember. Expect the first minute to be tens of thousands of people clapping together in unison with the drums as vocalist Dan Auerbach slowly preps the audience to sing along.

You know the song and you might even be tired of the song, but hearing it live will change everything. Florence’s magical vibrato, combined with soul claps, tambourines, drums, and hopefully a gospel choir, will turn this into one of those moments you really have a hard time putting into words. For the love of Florence, please do not miss this song.

This guy is developing one of the most passionate fan bases in music. The majority of people at this set will know every word to every song he plays, something you love to surround yourself with at a rap show. When he plays “A.D.H.D,” a song best consumed at night but still quite fantastic during the daytime, it will be a Moment. Even though Kendrick has the rare rapper talent of commanding respect on the stage all by his lonesome &#8212 and that’s a great thing to witness &#8212 I might have to close my eyes and let this song wash over me for about four minutes.

The up-tempo part of this song, after the beat drops, is great, but the first four Calvin Harris-sung bars are what make this song phenomenal. I will be singing this part so passionately, and I sincerely hope you will, too. The only thing that could really beat this part in his set is if he plays “We Found Love” and brings out Rihanna, in which case I will scream, cry, and then evaporate.

I know they have new music out, but I really hope they just play 2007’s Cross from start to finish. This album is pretty perfect, with “Let There Be Light” serving as the standout track. The first 3:30 is a loud, chaotic buildup for the final 1:25, which could arguably be the happiest 1:25 ever recorded. If you’re a Justice fan, chances are you haven’t seen them perform and this is the moment you’ve been waiting to see for years. Congrats, it’s here! If you’re not a fan, just show up. You’re welcome in advance.

The way this song will slowly fill the dry, desert air with synthesized sound might induce tears. I’m guessing this is going to be the first song of their set, and if the organizers have any sense, they will be playing as the sun is setting. If all of this takes place, this will be one of those moments where I become lost in the music and have nothing to report back. This song is magic. This song is Narnia.

If you’re not already part of the cult that is Avicii, this song will make you a card-carrying member. There’s no fighting it; just let it happen. This song, plus the crowd, and the light show, and the 75 percent chance you will be approached by a shirtless guy with a backpack named Curtis, will make your last night of Coachella something you can’t explain but will never forget.

2. Radiohead – “Everything in Its Right Place”

So just take everything I said about the M83 “Intro” track and multiply it by 342. This song moves me through my iPod earbuds, so I can’t really imagine what it’s like to watch it live. It’s a peerless song by a peerless band. This would be number one, if Thom Yorke & Co. simply did a better job representing for the gangsters all across the world. Unfortunately for them, they have no idea what that means.

Upon hearing just the first note of this song, I will declare them the undisputed winners of the festival. I mean, it’s Dre and Snoop, in California, closing out Coachella 2012. It’s almost too easy. They have many a collaboration together, but for me few things top 2011 and few songs are as iconic as “Still D.R.E.” Hearing this song, alone, is almost worth the trip itself, because who knows when it will happen again.