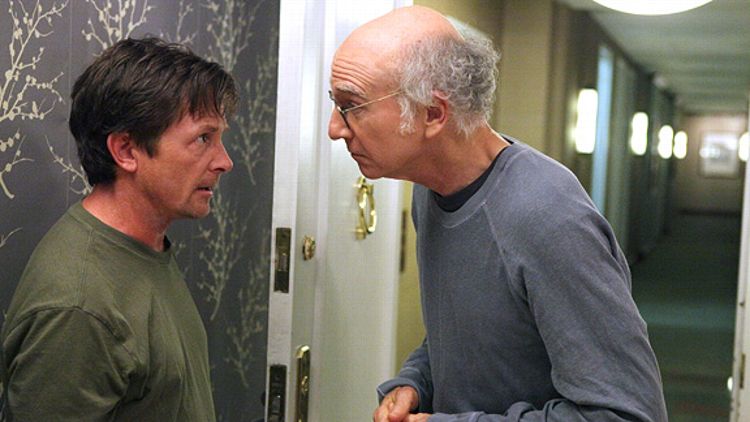 Too bad that the amazingly sassy, kid who played Ana Gasteyer’s Project Runway-loving, swastika-appreciating son Greg had the misfortune of appearing in the same episode where Michael J. Fox got to play himself as (maybe?) a diabolical bastard who uses his debilitating illness to completely fuck with Larry David, otherwise that’s all people would be talking about. Instead, Fox, perhaps ticked at being shushed by Larry at a piano bar, has a field day playing with his own saintly image, and ultimately uses his vast influence to get Larry kicked out of New York for miming a violin during Fox’s benefit speech. Although Larry doesn’t actually leave until he’s once again asked to appear at a charity event for ill children — then he and Leon are off to harass pig-parkers in Paris.

Henpecking: Larry may kowtow to Susie’s demands that he get a different, less gay birthday gift for Greg, but there’s no way he’d take a bullet for her.

Insecurities about appearance, health: Larry’s offended that Leon doesn’t think he could take Fox in a fight, but you can tell in his eyes, he’s not totally sure, either. That shaking thing, we don’t know.

Proclivities towards violence: He’s tempted to beat up Fox for clomping his feet, but he’d prefer Leon do it.

Xenophobia/racism: Clearly, Larry David treats the citizens of Paris with the same degree of respect and open-mindedness he affords his own countrymen.

Predicament: The bottom line is, if Louie’s taking advice about picking up women from Steven Wright — to say that he’s aging well is all you need to know about how he looked 25 years ago — he’s probably past the point where advice will help. And sure enough, a post-show adventure that begins with a woman in an idling car offering to show her pussy ends up in who-knows-where New Jersey being lectured by Chris Rock, with a quick detour to see F. Murray Abraham and his beard. And although the notion of Louie being told to settle down when his current circumstances can be attributed to having settled down too early is drenched in irony, Louie does seem to agree that he’s in need of some mooring.

Which would perfectly setup his desperation in learning that Pamela’s trip to Paris is meant to be permanent, if not for the fact that the show doesn’t have much regard for continuity from segment to segment, much less week to week. (Glad Louie’s sister and her daughter were able to work everything out. Phew!) His furrowed brow and puppy-dog devotion are so convincing and heartbreaking and earned that if he chooses to march out of the airport triumphantly because he mistook, or chose to mistake, “Wave to me!” for “Wait for me!” then his victory should be our victory.

Henpecking: If there’s a convincing argument to be made that having a wife would improve Louie’s life immensely, it’s not coming in the heard-but-not-seen, Vera Peterson-like form of Mrs. Rock.

Insecurities about appearance, health: For every weird pussy-showing rich lady from New Jersey who cups your balls while sitting shotgun, there’s a love of your life telling you she’ll never be attracted to you.

Career frustrations: Like Louis C.K. hasn’t already heard plenty about how he should be more like Chris Rock.

Xenophobia/racism: Louie is scared shitless at the prospect of being lost in New Jersey. He’s within his rights.

Predicament: Just when it seems like our partners are finally getting on the same page — Jesse’s insistence to Gus that killing Walt means having to kill him as well feels just as emphatic as Walt’s similar plea, and, given their almost complete lack of a personal relationship at this point, just as surprising — there they go having the knock-down, sloppy slugfest that’s probably been building up for ages. The fight looks as a fight between a middle-aged cancer survivor and a meth addict should, and quickly undoes a lot of the good cleanup work Jesse’s done recently around the house. Jesse doesn’t feel like having his car bugged is a fair sign of trust, while Walt doesn’t feel like Jesse is to be trusted, especially as Gus is asking him to go to Mexico to train amateurs to cook Walt’s precious secret recipe.

Franchising may work for Los Pollos Hermanos, but Gus isn’t too thrilled about sharing his other business, or the idea of making Jesse regional manager in charge of production. And though Jesse obviously is hesitant to ruin a perfectly nice stew with a vial of ricin, even he knows that killing Gus is probably his and Walt’s only way out of this mess, even though it would inevitably just cause a different one. But whatever common ground they reach doesn’t stay common for long once Walt stops bleeding on his hush puppies long enough to walk out of Jesse’s house. If these two crazy, mixed-up, psychologically dependent social outcasts can’t make it together, what hope is there for the rest of us?

Henpecking: Skyler doesn’t have any specific gripes with Walt other than to naively suggest that the car wash’s surprising success might mean he could quit his “other job.” Her creativity at the cash register is no different than Ted Beneke cooking his books, and she saves him from a damning audit with an uncharacteristic Beverly Hills Cop-style role-playing scheme, and the fact that she looks like she’s about to bail him out with a vacuum-sealed bag of cash means she may not be in a position to feel quietly superior to Walt for much longer.

Insecurities about appearance, health: “We’re both dead anyway” is not the kind of thing a lung-cancer survivor who’s excited about his new lease on life says. Nor do they usually smoke much.

Career frustrations: The ever-present threat of being liquified in a barrel of hydrochlroric acid is made explicit by Mike, and being stuck between Gus’ untold whims and Hank’s Hardy Boys streak doesn’t bode well.

Proclivities towards violence: Very much so! In fact, Walt’s unfulfilled bloodlust in regards to Gus means he’ll just have to take out his frustrations on Jesse’s face.

Xenophobia/racism: He doesn’t say it, but calling the police on Tyrus suspiciously lurking outside Hank and Marie’s house, he knows what he’s doing.

This week’s most powerless: For our final installment of the Powerless Rankings until Louie and Curb Your Enthusiasm return, or until two other put-upon middle-aged white guys are the protagonists of shows that are running concurrently with Breaking Bad, the winner and still champion is the flailingly ticking time bomb that is Walter White.

At Least Conan's Shrinking Audience Has Its Youth