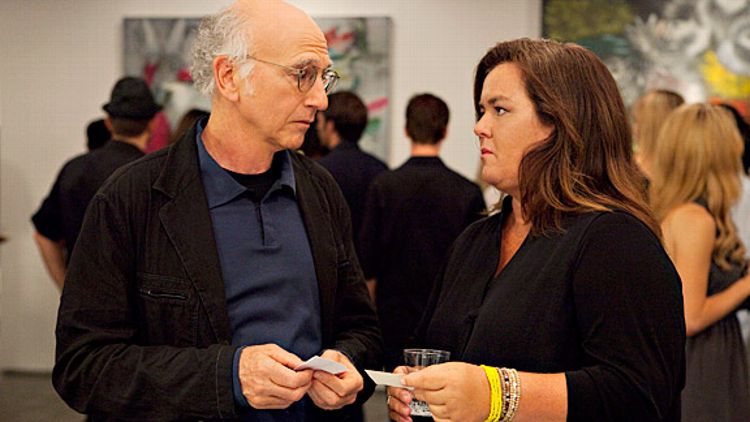 How are television’s favorite angry white males of a certain age feeling put-upon this week? Let us count the ways.

Predicament: Here comes the hangover: The morning after drinking too much red wine and telling too many DEA agents that the dead meth chemist they’re investigating is a mere pretender and the real Heisenberg is still out there, wink wink, Walt wakes up with a giant headache. Make that two — Skyler is understandably concerned that someone may knock on their door one night and shoot Walt in the face. His response is chilling. Not only is he too indispensable to his employers’ concerns to be in danger, he’s actually the one who will knock on someone’s door. Skyler gets the message loud and clear: Her passive high-school chemistry teacher husband is no passive middle-manager; he’s a stone-cold killer, and if she has any illusions that they’re going to get out of this thing clean, she is mistaken. She takes Holly and drives to Four Corners, and even after two coin flips tell her to keep driving to Colorado, she can’t do it.

Henpecking: Walt knows that buying his son the car will help him look good and make Skyler look like the “bitch mom.” And he knows that it’s the exact kind of conspicuous consumption that the car wash front and gambling fantasia are meant to obscure. But her spelling that out so plainly and calmly to him still cuts deep.

Insecurities about appearance, health: Walt shaving his head in the shower, surgery scar in full view, has the feel of a supervillain getting into costume. Somehow, this series will end, after its recently announced final 16 episodes, with Walt sporting a full head of hair, even if that head’s got a bullet through it.

Career frustrations: Though Walt’s previous attempts to regain control of his status with Gus have been wild swings, often involving assassination attempts in broad daylight with an unregistered gun, the ones in this episode are relatively measured — he’s right about the setup of Jesse’s thwarted robbery, right down to the motive, and the fact that his discovery only helps strengthen the wedge Gus is trying to create only highlights the kingpin’s genius, which seems torn right out of John Doe’s Se7en playbook. Shame, though, that Walt’s bravado might be getting three innocent Honduran dry-cleaner employees murdered.

Proclivities towards violence: Terrifying as he sounds to Skyler, he somehow seems less violent talking about his ability to be violent than when he’s just sitting at the breakfast table stewing.

Predicament: Louie takes the girls — dressed as a ballerina and Frederick Douglass, naturally — out trick-or-treating later than he should, and they wind up getting hassled by a couple of presumably costumed zombies. It takes Lily to scare them off, then Louie breaks a shop window, Mookie-style, in an attempt to recoup a little lost manhood.

After his standout performance at a screenplay punch-up session (led by Miles from Murphy Brown and, in his second appearance in this week’s troika of sitcoms, Alan from Sesame Street), which seems like a pretty low bar to surpass, a studio VP named Ellie insists on buying Louie lunch. She commands him to pitch her a movie idea, and his response — an unconventional story about a miserable, pathetic asshole who, counter-intuitively, becomes even more miserable and pathetic as the story progresses, without any hope of redemption — is so deflating that she’s off to another table before they even so much as order drinks.

Henpecking: Louie lets the girls veto his decision that they head home once it’s dark, then gets shown up by his youngest daughter when it comes to talking down faux-undead thugs.

Insecurities about appearance, health: Though he wouldn’t consider himself much of an actor, Louie C.K. conveys more discomfort living within one’s own skin during that short walk through the restaurant than anyone should ever have to exhibit in public.

Career frustrations: I don’t know, I’d pay to see that movie he was pitching. And how sweet must those punch-up checks be?

Proclivities towards violence: The window-smashing wasn’t necessarily effective, or logical, or a good thing for his children to see, but it probably felt real good to do.

Xenophobia/racism: Not all fake zombies are criminals, you know. It’s an unfortunate cliche.

Predicament: Larry is thrilled to get the number of Jane Cohen at an art opening, less thrilled to find out immediately after that an equally smitten Rosie O’Donnell just got the same number. Rosie thinks her date is more valid because she got there first, while Larry thinks tie goes to the hetero; in any event, it’s now a competition for the affections of the apparently bisexual Jane. But Larry feels like he may need a little competitive advantage, and gets help from Leon — who drove the Prius to New York unannounced for some reason — in the form of a little blue pill. The juicing works so well that Jane even cancels her date with Rosie to the Tonys, right until he’s found out on the steps of the Baseball Hall of Fame in Cooperstown — she won’t let him in, even if he was just trying to level the playing field and everyone else was doing it. (The analogy is clever enough, if a little on the nose. Par for the course for season eight of Curb Your Enthusiasm.)

Also, Larry tries to exact penitent justice from a sushi-restaurant manager who failed to bow at the appropriate 90-degree non-shitbow angle needed to express remorse for improperly packing a quart of soup. And he’s forced have lunch with non-friend Duckstein after the latter nearly chokes to death eating a sandwich on a park bench by his lonesome. But really, the viagra stuff.

Henpecking: Larry’s chemistry with Jane might be the most natural and easygoing of any woman he’s been shown with, at least until he tests positive for performance-enhancement. The real friction comes from Rosie O’Donnell, whose taunts feel less like henpecking than flat-out bullying. We’d like to say it gets better, but it probably won’t.

Insecurities about appearance, health: Strolling through Washington Square Park at night to score a couple viagra off an elderly, but apparently still-virile septuagenarian dealer so he won’t lose his awesome new girlfriend to a famous lesbian is pretty much middle-aged sexual paranoia in its most unadulterated form.

Career frustrations: The fact that Renny Harlin can parlay Cutthroat Island, one of the biggest bombs in movie history, into an amazing apartment overlooking Central Park, is a pretty stark reminder that Larry David has no career frustrations to speak of, ever.

Proclivities towards violence: Only towards that softball. Right?

Xenophobia/racism: Something something Japanese tourists with cameras, bowing. But kudos to the restaurant manager being more baldly exasperated by Larry quicker than maybe any Curb day-player in recent memory. Except for the lady in coach last week. Okay, never mind, they all get pretty exasperated pretty quickly. But this guy’s strategy to get Larry out of the restaurant as fast as possible feels inspired, if ultimately futile, and goes some way towards outclassing the easy Japanese-tourist gag.